Art Night, London’s favourite contemporary art festival, will celebrate its fifth edition by taking place in locations across the United Kingdom for the first time this summer. Transforming iconic and unexpected public spaces within London since 2016, Art Night 2021, curated by Helen Nisbet, will stretch 1000+ miles across Scotland, England and Wales, from North to South and East to West as well as even further digitally and physically for international audiences. For the first time, Art Night – will also take place for a month, allowing audiences the opportunity to access commissions, performances and interventions in rural locales, towns and cities as well as from home.

Announced for the first time today, is the Guerrilla Girls most significant UK public commission to date, The Male Graze. The commission includes a website, online gig and national series of billboards exploring bad behaviour both historically and today. The work will manifest as a series of billboards across the UK, including London, Eastbourne, Dundee, Birmingham, Glasgow, Leeds, Cardiff, Warwick, Swansea and more. The billboards will be on display from 18 June to 18 July and in partnership with Art Night’s friends Compton Verney, Dundee Contemporary Arts, Glasgow Women’s Library, g39, Glynn Vivian Art Gallery, Grand Union, The Tetley and Towner Eastbourne. Art Night will also present this commission in two London sites in Shoreditch and London Bridge. 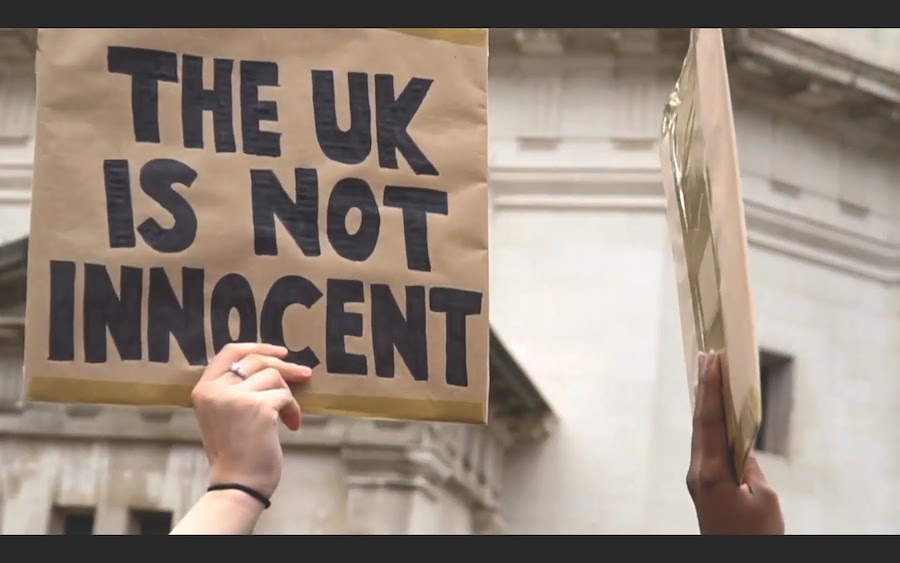 Alberta Whittle will present a new film, Holding the Line, alongside a recorded performance at Somerset House which will be broadcast at the end of the festival. She will also perform at Murray Edwards College, Cambridge. There will also be a screening programme of Alberta’s films in Abergavenny train station, Wales, in partnership with Peak and at KLA ART produced by 32° East in Uganda.

Award-winning dancer and choreographer Oona Doherty will collaborate with dancers to stage an immersive theatrical installation and live performance at a brutalist landmark,180 The Strand. Dancer and choreographer Oona Doherty will work with collaborator and filmmaker Luca Truffarelli to present Lazarus Multiverse, bringing the camera on stage for an immersive performance moving between dance, death and resurrection, on repeat, in limbo.

Working with bioacoustics, biological time and electromagnetism, Philomène Pirecki will broadcast a new video exploring the ephemerality of intense sensory states, recorded at the newly launched 180 Studios at 180 The Strand and offsite locations.

Collaborative art publishing practice OOMK (One of My Kind) will create their first contemporary art commission for Art Night 2021. The work consists of the design and distribution of “STUART Papers”, a highly visual newspaper that reflects thematically on selected texts from the Stuart Hall Library at INIVA with responses from contemporary London-based collectives.

Turner Prize winner Mark Leckey will present a new work where looped YouTube footage of a young man jumping through the glass window of a bus stop is augmented by an acrobat re-enacting the same action as they are flashed by a brilliant light. Recorded at 180 Studios at 180 The Strand.

Outside of London, artist Isabel Lewis has developed a new Art Night commission – What can we learn about love from lichen? – in the Scottish Isle of Skye. A co-commission between Art Night and ATLAS Arts, Isabel Lewis is working with collaborators in Skye to choreograph a series of guided walks brought together in a final ‘hosted occasion’, tuning the ears, eyes and the body to more sensual forms of knowing and being together. In partnership with Compton Verney in Warwickshire, Isabel Lewis will draw on these choreographic scores to stage a new sound work within Compton Verney’s parkland, and this will run for the duration of Art Night. He is supported by Goethe-Institut.

In partnership with Broadway’s Near Now, Adham Faramawy will present a new Art Night commission: The heart wants what the heart wants. Adham Faramawy will introduce a new film work continuing their research into identity, bodies, desire and queering ideas of the natural. This work will explore our entanglement with each other and the multispecies ecology we live within.

Rather than a ‘theme’, the 2021 festival is titled Nothing Compares 2 U after the song written by Prince and famously performed by Sinead O’ Connor. This lyric acts as a frame for the programme, not asking artists to respond or fit within it, but instead to use it as a reference point or set the tone. In this case, the reference refers most specifically to a performance by O’ Connor on The Late Late Show in 2019 – visibly older than in her iconic 1990 music video, wearing a hijab and carrying the scars of a career tarnished with controversy and conjecture, at the end of the performance O’ Connor looks directly into the camera at and gives a little wave. This quiet moment of self-determination and defiance is the essence of the 2021 programme.

Helen Nisbet, Artistic Director of Art Night 2021, said: “We find ourselves hobbling, a year after COVID-19; political and economic uncertainty and potential devastation for the arts. This programme was developed during ongoing Brexit’ negotiations’ in a Conservative-led Britain, with far-right politics rising across the globe. The Art Night 2021 programme was still about our victories and survival tactics – small acts of defiance and self-determination moments – both personal and collective. It is about how we continue and what gets us through when so many of the dominant economic, institutional, political and cultural structures are against us or are trying to break us.

We are indebted to our artists for the time and the care they’ve put into making work under such uncertain and challenging circumstances. The constant change has been tough, but it has also offered a beautiful opportunity to adapt the festival’s format – to work across the whole country, invite camaraderie through partnerships, and expand the duration of the festival. We’ve had to do some quick learning and shifting on considering what it means to curate and produce work to be viewed online, but I’m excited about the scope of the commissions to be seen by anyone in the world with internet access.”

Philippine Nguyen and Ksenia Zemtsova, Co-founders of Art Night, said: “In 2015, we had the ambition to create London’s first free night-time contemporary art festival in unexpected places. We were only starting, working from home and learning as we went along. We knew we wanted contemporary art to be accessible to a wider audience, regardless of background. Fast forward five years, four editions, 260,000 live audiences and 50 major artist commissions, we’re back working from home, but our ambition to widen audiences for contemporary continues to expand. In 2021, we’re delighted to present new work by exceptional artists to audiences across the country, in cities, towns and even villages.”

“One of the great things about Art Night is being able to experience art and performance in unusual places and settings, across times and places, working without fixed ideas about where and how art can be. These things are significant to ATLAS. Isabel’s Occasions are about building more complex conversations, being in places and with one another in ways that promote healing, celebration and belonging differently – and so hosting her work here feels very timely. It’s been great to share with Art Night and Isabel” – Ainslie Roddick, Artistic Director, ATLAS Arts.

“We’re excited to collaborate with Art Night and Transport for Wales to present film works by Barbadian-Scottish artist Alberta Whittle at Platform 2, new project spaces at Abergavenny Railway Station in the Welsh Borders. As we emerge from lockdown, this inaugural summer programme launches both a new arts venue and partnerships to help us reimagine the possibilities for our local and global futures.” Melissa Appleton, Creative Director, Peak

“We’re delighted to be working with Art Night as it expands beyond London. It’s a wonderful opportunity to bring work by renowned artist collective Guerrilla Girls to Dundee, at a moment when their activism feels more relevant than ever.” Beth Bate, Director, Dundee Contemporary Arts

Joe Hill, Director, Towner Eastbourne, added, “Bringing artwork to our communities across Eastbourne and taking it outside of the gallery is a crucial part of what Towner Eastbourne does. We are thrilled to be working with Art Night to realise this important and timely commission.”

Art Night was set up in 2015 by Philippine Nguyen and Ksenia Zemtsova. The original four festivals took place in partnership with art organisations in different parts of London and were curated by leading UK based curators – The ICA and Kathy Noble (2015); Whitechapel Gallery and Fatos Uztek (2016); Hayward Gallery and Ralph Rugoff (2017`). In 2019, Art Night appointed Helen Nisbet as Artistic Director. The festival took place in the outer London borough of Waltham Forest to coincide with the Mayor of London’s first Borough of Culture.

Art Night has attracted 260,000 live audiences with an additional +2 million through touring, museum acquisitions, and more extended displays in four years. Fifty artists have presented significant new commissions, and 150 artists showed work as part of an open call sister programme – the Art Night Open, which ran from 2016-2019. Ten thousand participants have actively taken part in Art Night projects; these include residents, community projects, amateur dancers, choirs and young people from 30 different schools. 2.6 million has been raised and invested in artists and the local economy through 120 partners and funders and with the support of 6 business improvement districts and eight local authorities. Art Night was featured in more than 650 articles and reached 40 million views on social media since 2016. Art Night is proud of the work done to support those less familiar with contemporary art in attending the festival; 80% of recently surveyed audiences were unfamiliar with the artists, contemporary art or disciplines experienced.