Artlyst is again the media partner with London-based art initiative Art Wars which travels to Miami and Los Angeles this December to unveil 20 brand new works by emerging and established artists. Each artist has been provided with a Star Wars Stormtrooper helmet, with the brief of transforming it into a piece of art:  ‘Turning the Dark Side into the Art Side.’

Art Wars is curated by Ben Moore, Founder of Art Below

Eight of the helmets will be unveiled at the Red Dot Art Fair as part of Miami Art Week (6–10 December).  Then to coincide with the opening of Star Wars ‘The Last Jedi’ the entire collection will go on show at Sur Le Mur Gallery (SLM) in West Hollywood Los Angeles where Art Wars curator Ben Moore has teamed up with SLM gallery director Megan Philips to add some of LA’s finest artists to the mix. 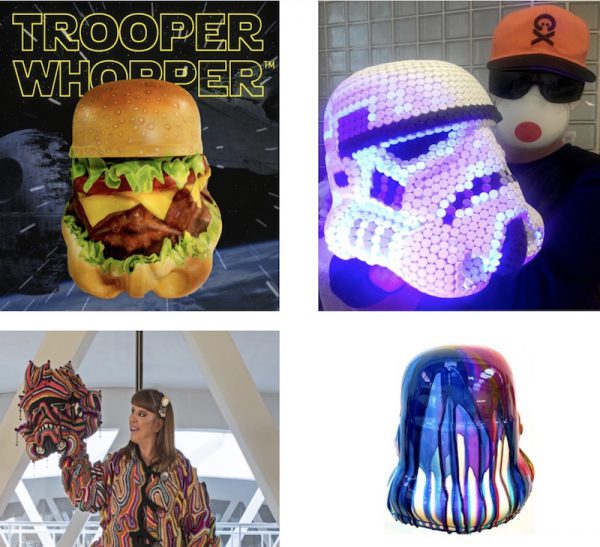 Philip Colbert’s cheeseburger helmet will add a Pop Art touch to the impressive roster. Colbert’s solo show at Saatchi Gallery this year has followed on from a growing list of accolades, including ‘The World Goes Pop’ at the Tate Modern (London), ‘Inspired’ at the Van Gough Museum (Holland) Collectors of his work include Cara Delevingne, Anna Della Russo, Lady Gaga, Rita Ora and he is set to collaborate on a new clothing line with Kanye West.

Joana Vasconcelos is the the Portuguese artist who adorned the 55th Venice Biennale with tampons and placed a pink feathered helicopter in the Palace of Versailles.  She took part in the inaugural Art Wars exhibition at the Saatchi gallery in 2013 embellishing her helmet entirely in crochet.  This year Vasconcelos has created the ‘Wooltrooper’ using handmade woollen crochet and ornaments (see image below)

For Art Wars USA, Chemical X has embellished his stormtrooper helmet entirely in ecstasy tablets. Chemical X’s identity is unknown. In September the artist attracted headline news when he featured a lifesize silicon model of British actress and model Cara Delevigne (already a collector of Chemical X’s work) surrounded in mesmerising concentric circles of ecstasy tablets which went on sale for £1 million.

Other highlights include Ben Eine, one of the most successful street artists in the world today and regarded as a pioneer in the exploration of graffiti letterforms. In 2010 his artwork was gifted to President Obama by David Cameron. A particular area of the East End has been named ‘Alphabet City’ after his colourful array of shopfront ‘shutter art’. Eine’s work is currently held in the permanent collections of the V&A, London, The Museum of Modern Art, Los Angeles and galleries worldwide.

One of the godfathers of the European street art movement, Blek le Rat inspired hundreds of artists around the world with his stenciled style. He is frequently cited as a major influence of artists like Banksy and Space Invader, and through his work in Paris he established a style of urban art that quickly spread through Europe and eventually the United States.

Goldie MBE will also be participating. Though well known as a musician and actor, he originally found his calling as a street artist and was a respected figure in and around the Midlands at the inception of the graffiti movement.  Further to being one of the UK’s most influential original Graffiti writers Goldie has had international success as a Drum and Bass DJ, producer and has amassed over 2.5 million record sales.

The inaugural Art Wars exhibition was held at the renowned Saatchi Gallery in London in October 2013. It included Stormtrooper artworks by internationally acclaimed artists including Damien Hirst, Jake and Dinos Chapman, D*Face, David Bailey, Alison Jackson, Antony Micallef, Mat Collishaw, Yinka Shonibare MBE, Joana Vasconcelos and Mr Brainwash. Since then Art Wars has featured at The Other Art Fair, The Moniker Art Fair, travelled to Sweden, Dubai, Las Vegas and the LA Art Show.   In 2016 Anish Kapoor teamed up with Art Wars to produce a brand new helmet artwork which raised £30,000 for the Missing People Chairty and the Missing Tom Fund.

Art Wars is curated by Ben Moore, Founder of Art Below and will raise funds to benefit two charities, Missing People and the Missing Tom Fund. The Missing Tom Fund was set up by Ben Moore, to help raise money to find his brother Thomas Moore, who disappeared in 2003 aged 31 years old. His family have not heard from him since then. Now, 13 years on,with the support of the Missing People Charity his family continue to search for Tom. The ArtWars USA exhibition opens in Miami in the week of Tom Moore’s 46th birthday.