Pi Artworks has announced ‘It still is as it always was’, the first joint exhibition by Nancy Atakan and Kalliopi Lemos; artists who have reputations for work rooted in storytelling, identity and the female experience. The show will feature the premiere of the collaborative film, ‘Necklace of Time’, several new individual works, as well as an exceptional performance based on ‘Necklace of Time’ to be staged at the opening.

In ‘Necklace of Time’, Lemos and Atakan enter an eternal, poetic world where they engage in a ritual-like performance. Wearing heavy golden necklaces adorned with colourful jewels referencing Ottoman designs and reminiscent of Byzantine armour, the artists participate in the task of removing the jewels and replacing them with small embroidered words chosen to reflect their lived experiences – birth, love, friendship and marriage.

Nancy Atakan (B. 1946, USA) Nancy Atakan is an active figure in the Istanbul arts scene as an artist, teacher, art historian, and art critic since 1969. Often autobiographical, she concentrates on topics such as the relationship between image and word, the meaning of belonging, gender politics, memory, and globalisation as they relate to her personally. All of her work involves research, collaboration and dialogue as it incorporates observations of current events and references to history and culture. Permeated with touches of lightness, historical narratives and weighty issues within her work are brought closer to everyday life. As a part of her art practice, she co-founded the Istanbul based art initiative/project space, 5533. 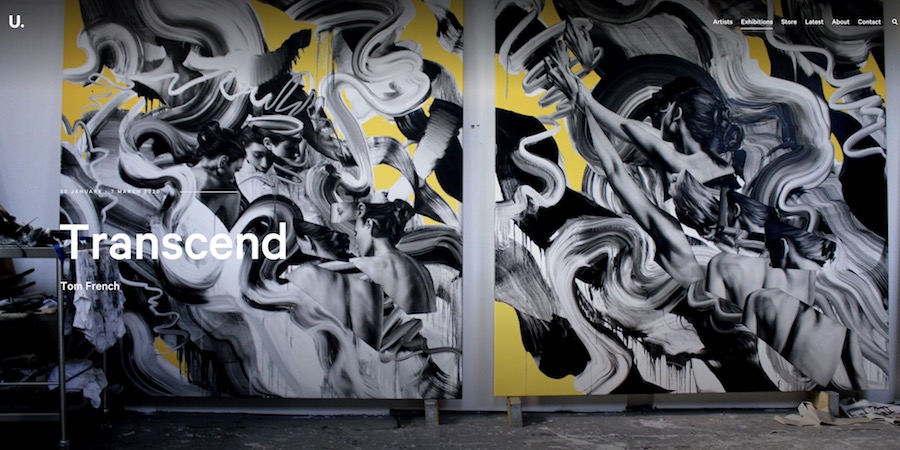 Unit London is currently presenting Tom French’s major retrospective, Transcend. These pieces were created in the knowledge that they would most likely be the artists’ last. In his final months Tom French poured every morsel of hope, determination and strength into this body of work. He spoke of the tranquility it instilled in him, the therapeutic nature of executing a skill that you have been honing your entire life and the joy that can be gained by continuing to find variation in something so familiar, to find foreign pleasures in native spaces. In some ways the chaotic mess that is premature illness was brought to heel by Tom through his work. To transcend is to go beyond the range of limits of a field of activity or conceptual sphere; Tom’s workflows over these boundaries on both sides, it is at once elusive and illusory, thoughtful and innovative.

Transcend brings together two of Tom’s most prominent bodies of work: the Parallax and Duality paintings. This is work that emphasises art’s ability to transcend a definitive visual experience and rational conclusion by creating an imaginary framework for interpretation. Both sets of work are monochromatic, figurative combinations of photorealism and abstraction that depict a psychological landscape as well as material space. They are comprised of technically tight charcoal drawings, occasionally enhanced with acrylics, oils, spraypaint and even gold-leafing.

The term ‘Parallax’ denotes the sensation surrounding the theory of perceptual variation – namely, the displacement of an object caused by a change in the position from which it is viewed. The fragmented presentation of Tom’s characters is representative of the way in which we perceive the external world, both visually and psychologically. When viewing a figure we do not see it as a whole, our eyes roam, shifting focus and settling on various points of interest; we construct an individual subjective image, one that is, by definition, fragmented. Tom imbued with a kind of melancholic defiance, even at the last he was experimenting with new methods and ideas: the Parallax paintings were his first to incorporate the use of colour, not only did he find this therapeutic, it’s also a pointed inclusion of the most subjective of artistic mediums, thoroughly justifying the choice of ‘Parallax’.

The Parallax theme of simultaneous multiple perspectives and realities has many conceptual parallels to the Duality works, which utilise illusion and double image techniques to explore this range of ideas further. The Duality paintings are meditations on the theory of dualism: the idea that the mind and body are distinct entities. In these works swirling abstraction captures consciousness and mental activity, while glimpses of the figurative bring attention back to the physical. When one stands back and takes in the entirety of the work a composite shape begins to appear, encapsulating both realms of a dualistic existence. In Tom’s own words: “there is no single reality here, the realities transcend and coexist, they repeat and overlap, and – particularly with the illusion works – transcend the usual boundaries.”

This April, Cj Hendry presents her 7th solo exhibition and first show in London. Titled Epilogue, the presentation introduces a new corpus of work comprising intricate, multi-chromatic drawings of flower petals. Showcased in a dilapidated East London church over ten days, during which 10 tonnes of recyclable confetti will drop from the ceiling to gradually cover the grounds, Epilogue is an immersive experience exploring the ephemeral nature of beauty.

For Epilogue, Hendry has drawn 50 petals from her vast collection of flora from around the world. The artist carefully arranges and photographs each specimen, and meticulously reproduces the images in Caran D’Ache pencils. The creation of each drawing requires intense discipline and concentration, with a small-scale piece taking up to 80 hours. Far from being an ordeal, however, Hendry views drawing as a meditative process which provides a momentary respite from the outside world.

The new series of work draws on depictions of nature throughout art history, from 17th century Dutch Still Life paintings to the Pop Art of Andy Warhol and Marc Quinn. While the botanic motif has traditionally symbolised life and vitality, Hendry opts for a darker interpretation.

Instead of illustrating entire flowers, Hendry depicts single petals that have been severed from their buds and isolated from the rest of its body. Without their source of nutrients, the leaves are inevitably left to decay. The artist portrays them precisely when they begin to dry and wither, capturing in her drawings the final vestiges of their temporary existence.

This series is concerned with decay and death. We treasure flowers for their fleeting beauty. Countless artists have depicted flowers in full bloom, but few have portrayed them as they begin to wither and shed their petals. To me, it’s during this process of decomposition that the tension between vitality and mortality is brought to the fore. When you walk around the exhibition, remember that all the petals I’ve drawn have now turned to dust. The drawings are all that remain from their brief existence. In a way, Epilogue is a memorial to them and a reminder that nothing lasts forever.
For Hendry, the exhibition space and its associated concept are crucial to the narrative of her practice. Eschewing the pristine, white-wall gallery space, the artist frequently creates temporary large-scale installations. The Epilogue takes place in a disused East London church, where machines fixed onto the ceiling steadily release 10 tonnes of snow-white confetti throughout the exhibition. During this period, viewers will navigate the cavernous hall as confetti drift down from above like cherry blossom petals, gradually blanketing the ground around them.

The interactive installation also touches on the religious notion of rebirth. To prepare for the exhibition, the studio has renovated the church and repaired its damaged ceiling. This regeneration process will breathe new life into the church and reinstate its role as a hub for local communal life. The end of Hendry’s Epilogue will thus mark the beginning of a new chapter in the church’s own story.

Cj Hendry (b.1988) is a New York-based artist originally from Brisbane, Australia. Globally renowned for her large-scale, photo-realistic drawings of consumer goods and immense, interactive exhibitions, she has developed a dedicated following through her unique blend of technical mastery and conceptual depth.

A self-professed ‘lover of products’, Hendry is heir to the Pop Art tradition that firmly established depictions of everyday objects and mass culture in the art historical canon. In the footsteps of Andy Warhol, Hendry generates instantaneously appealing images that celebrate kitsch aesthetics and its ubiquitous presence in contemporary digital culture. More recently, the artist has incorporated new subject matter to delve into the deep-seated concerns and anxieties of current society.

After spending seven years studying architecture and finance in Australia, Hendry abandoned the endeavour in 2014 to pursue art full-time. She has since presented six solo exhibitions across Australia, the U.S. and Asia. In 2017, the artist collaborated with esteemed fashion house Christian Louboutin to present her first works in colour during the 2017 edition of Art Basel Hong Kong.

This exhibition is presented in partnership with Zachary Quinn, Co-Founder of Love Your Melon. Love Your Melon is an apparel brand that aims to positively impact the lives of children battling cancer by donating 50% of its profits to pediatric cancer charities and research.