Charleston, the proverbial home of Virginia Wolfe, Vanessa Bell, Roger Fry and Duncan Grant has announced details of a Betty Woodman and George Woodman exhibition, opening on March 25, 2023. Conceived in partnership with the Woodman Family Foundation, this exhibition is both the first combined presentation of the artists’ work in the UK, and the first exhibition of George Woodman’s work to be shown in the UK. Featuring paintings and photographs by George, and ceramic sculpture, paintings, and bronze benches by Betty, the show focuses on the couple’s prolific time in Italy where for nearly five decades they lived and worked at their farmhouse in Antella. Antella had an enduring effect on their practices and this exhibition explores the artists’ mutual influences, their rich dialogue in a variety of media, and their shared life immersed in art, culture, travel and experimentation.

The Woodmans first spent a year together in Italy in 1959-60 and returned in 1965-6, when George was granted a University of Colorado Faculty Fellowship and Betty won a Fulbright-Hays Fellowship in Florence. Both artists felt the profound influence of Italian art history, incorporating elements of classical sculpture, Italian architectural features and Renaissance floor tiles into their works. It was during this early time in Florence that Betty became inspired by the voluptuous forms of early Etruscan folk pottery, using French stoneware to develop her Etruscan Vases (1965-66) series, four of which are on view at Charleston. Meanwhile, George left behind the abstract landscape paintings begun on the couple’s earlier Tuscan sojourn and began a series of paintings based on patterns in 13th century floor mosaics. The modernist painting Piazza San Francesco di Paola (1965) exemplifies this interest, as well as his academic research into colour field theory, minimalism and geometry. The year in Florence marks a brief period in which George and Betty collaborated on specific artworks—George painted Betty’s Etruscan-inspired vases—but their collaboration in creating a life built around art and Italy was to continue far beyond that. 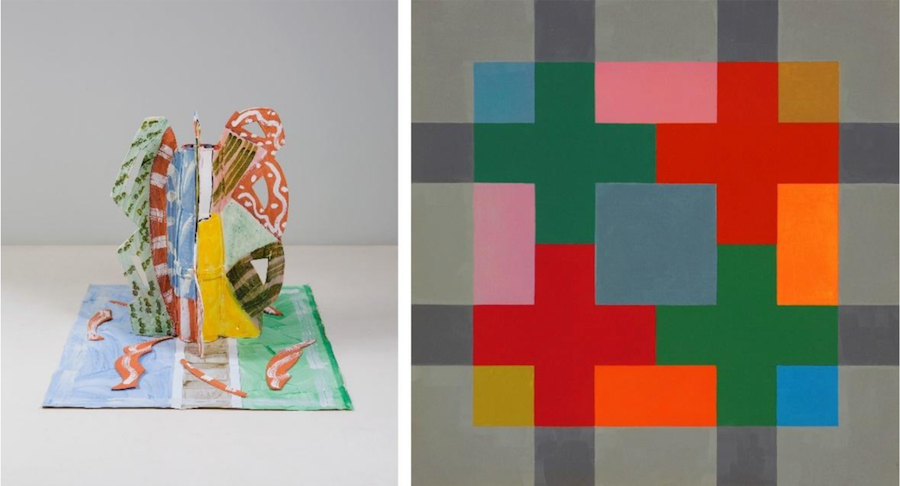 The Woodmans’ influential experience in Italy prompted the purchase of their farmhouse in Antella in 1968—funded in part by George’s 1967 fellowship from the National Endowment for the Arts–where they chose to spend every summer with their children, Francesca and Charles, until their retirement from teaching in the 1990s, when they began to spend half of each year there. It was both their home and their studio; George once described it as ‘an artist residency for two’.

Wherever the Woodmans lived and worked their domestic surroundings fed into their artistic practice; at Antella art was part of everyday life, and vice versa. Betty had begun her career by making and selling functional ceramics for daily use, such as vases for flowers and plates and vessels for the kitchen table. As her artistic vision developed, Betty’s sensibility became more sculptural and conceptual, often referencing functionality in her work but playfully exaggerating these elements. It was at Antella that Betty developed her Pillow Pitchers (1970s-2000s), highly technical and singularly radical forms–partly inspired by Etruscan vases and partly by Chinese ceramic pillows–that, as in the case of Sea Gull Pillow Pitcher(1978), allude to functionality but are purely conceptual, being too heavy for use. These themes were to continually develop and, in the last decades of her life, Betty created what she called paintings; assemblages of painted surfaces and ceramic sculptures which, in the case of Kitchen Table (2014), resulted in pots, vessels and tableware bursting from the painting in sculptural, 3D ceramic forms. Engaging with domestic objects and challenging perceptions of ‘high art’ and ‘craft’ would become defining characteristics of Betty’s career.

Antella’s close proximity to Florence, and the artists’ travels throughout Italy and Europe, provided a continual source of inspiration and grounding in classical art history. George had begun his career as an abstract painter, but became best known for his formally inventive tessellations and complex understanding of colour. This work evolved directly from his summers spent working in his Antella studio and from the rich culture, art and architecture in museums and churches he visited across Italy. In the late 1970s and early 1980s, the rigorous attention to pattern that is characteristic of his paintings found new and all-encompassing form in paper tile installations. In the mid-1980s, George’s paintings turned toward classical figuration, and he began making black and white photographs of nudes in classical architectural and sculptural settings, articulating the influences of Italy upon his work in new ways.

Antella fostered the artists’ creativity, and they developed a lifelong dialogue in their work, encouraging each other to push the boundaries of the materials and forms they worked with. For example, when George stopped painting the vases Betty was producing, she began applying paint herself, the process of which opened her eyes to the idea of the vessel itself as a canvas and carrier for colour and pattern. This departure paved the way for further experimentation in the technique of painting with ceramics for which Betty is renowned, culminating in large-scale ceramic wall installations like Wallpaper 19 (2017), which is included in the exhibition at Charleston. This was a ground-breaking move that led to Betty being associated with, and highly respected for, radically synthesising painting and ceramic sculpture; a real game-changer for ceramics as a medium in contemporary art. George too was influenced by Betty and her work. In 1982, she persuaded him to reinterpret the immersive paper tile installations he had been exhibiting in galleries and museums in the US into ceramic and to tile the walls and floor of the bathroom at the house in Antella. This body of work sparked a series of major public commissions in tile for George, in cities across the United States of America.

The Woodman’s lifelong artistic dialogue is synonymous with the practices of Bloomsbury artists Duncan Grant and Vanessa Bell, who made Charleston their home. Duncan and Vanessa, who lived and worked side by side throughout their lifetimes, would review and critique one another’s work and were mutually influential in a very similar way. They too created a home that became an artistic sanctuary where the everyday was richly imbued with art. Like Charleston, Antella was a home full of experimentation and creativity, surrounded by an abundant garden, where the artists’ domestic lives interlaced with their practices. Antella was a place where the Woodmans were able to live and work together and the Italian influence on the artists’ lifelong dialogue is evident in their kindred palettes, patterns and historical references. Betty and George made some of their most significant artistic breakthroughs at Antella, and their time there left a lasting legacy on their work.

The Woodman Family Foundation, based in New York, is dedicated to stewarding the artistic legacies of Betty Woodman, George Woodman, and their daughter, Francesca Woodman (1958-1981). It maintains and oversees a substantial collection of artworks by each artist from all periods and media, organises museum and gallery exhibitions and publications of their work, and facilitates the placement of their works in public collections. The Foundation is in the process of cataloguing the extensive archives of each of the artists to create a future study centre open to scholars and curators, and it makes grants to support the arts.

Charleston is the home and studio of the modernist painters Vanessa Bell and Duncan Grant. It was a gathering point for some of the 20th century’s most radical artists, writers and thinkers known collectively as the Bloomsbury group. It is where they came together to imagine society differently and has always been a place where art and experimental thinking are at the centre of everyday life. Today, we present a dynamic year-round programme of exhibitions, events and festivals. We believe in the power of art, in all its forms, to provoke new ways of thinking and living.