An exhibition of more than 80 paintings by a now obscure generation of artists, exploring the British Realist tradition in art, between the two World Wars has opened in Edinburgh. It focuses on scrupulously detailed realist painting, part of a worldwide trend at the time. Comparisons can be drawn to the popular American Realest movement of Grant Wood, Thomas Hart Benton, and Edward Hopper.
When abstract art became fashionable after the Second World War, these artists became sidelined and largely forgotten. Many artists of the period opted for a new kind of hard-edged, sharp-focussed realist painting, and found new subjects in modern life. This exhibition, showing only in Edinburgh, includes some 80 paintings, of astonishing technical accomplishment and stunning beauty, by more than fifty artists – including Gerald Leslie Brockhurst, Meredith Frampton, Laura Knight, James Cowie and Winifred Knights. Borrowed from public and private collections throughout Britain, this is a unique chance to rediscover a remarkable, but little known period in British Art.

“Realist art of the interwar period constitutes one of the highpoints of British art of any era” – Simon Groom, Museum Director

Working in a realist vein – looking intently at the world around them and recording what they saw in accurate, sometimes microscopic detail – the artists featured in True to Life kept faith with a traditional, representational approach at a time when it came under attack by modernists such as Ben Nicholson, Barbara Hepworth, and Henry Moore. When abstraction, Pop Art and Conceptual Art became major forces in the post-war era, these figurative artists – many of whom were still alive – fell spectacularly out of fashion. Whilst Stanley Spencer (five of whose paintings feature in the exhibition) has always remained a celebrated figure, many of his contemporaries – such as Gladys Hynes, Pamela Bianco, Cosmo Clark, Leonard Campbell Taylor and David Jagger – who were celebrated at the time, are now virtually unknown, even to specialists.
And yet these artists were modernisers too, reacting against the anecdotal detail favoured by the Victorians, and rejecting the flashy, Impressionist brushwork of the Edwardians. They favoured a very precise realism that is sometimes called ‘hard edged’ or ‘brushless’. It was part of a worldwide trend in the period, seen most famously in German Neue Sachlichkeit painting of artists such as Otto Dix and George Grosz. But the British realists of this period never formed a school or a style or an ‘ism’ – making them difficult to categorize or pin down. 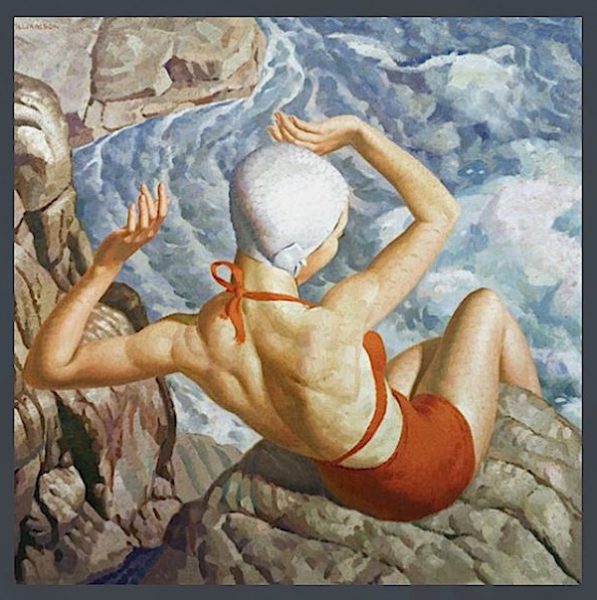 True to Life focuses in particular on the tight, obsessively detailed kind of realism, which is typical of artists such as Gerald Leslie Brockhurst, Meredith Frampton, and James Cowie. These artists worked with fine brushes in a controlled, polished style, often using old-fashioned glazing techniques, where one thin, semi-translucent film of paint is layered over another, and the brushwork is barely visible. Painting with immense care and precision, and demonstrating enormous technical expertise, they created highly finished figure studies and portraits of uncanny beauty which, in their flawless elegance, capture the glamour of the era.
Brockhurst was a hugely successful portrait painter, whose sitters included the actresses Marlene Dietrich and Merle Oberon, as well as Wallis Simpson (aka the Duchess of Windsor, wife of the former King Edward VIII) and the Duchess of Argyll. The artists’ devotion to craftsmanship meant that they worked slowly; Brockhurst spent two years painting the portrait of his companion Dorette, but once it had sold he still wanted it back so that he could work on it again.
Most of the artists in the exhibition were born in or around 1880, before the invention of the motor car, the aeroplane or telephone, fought in one world war, and lived through another, and overlapped with Jackson Pollock and Andy Warhol. It was a period of extraordinary social and cultural upheaval, and many of the artists looked for inspiration and comfort to the art of the distant pre-Industrial past, particularly Early Italian Renaissance painting and the work of Dutch masters such as Vermeer. Across Europe, the aftermath of the First World War prompted artists to return to ideals of purity, order, and unity. The tendency towards this new kind of classicism in British art is characterised by the big, simple forms, cool colours and elimination of incidental detail seen in the work of artists like Frampton, John Luke, and Dod Procter.
The realist artists are fascinating not only in terms of their technical prowess and modernising styles but also in their subject matter. They favoured subjects that embraced the modern experience and referenced topical issues such as the changing role of women, new technologies, the rise in commercial culture and popular entertainment, and the growing interest in recreation. Pictures depicting travel, sports, holidaymakers, picnics, and country walks were particularly popular, reflecting the greater provision of leisure time and paid holidays.
The exhibition features wonderful examples of these popular themes in the work of artists such as James Walker Tucker (Hiking, c.1936), Bernard Fleetwood-Walker (The Family, 1932), Harold Williamson (Picnic, 1938) and Spray (1939), and Mary Adshead (The Cruise, 1934).
Lancelot Myles Glasson, whose work (The Young Rower, 1932) is also being featured, was particularly well known for his pictures celebrating the modern sportswoman enjoying a wide range of sporting activities once reserved for men.
True to Life also features outstanding examples of paintings commissioned to advertise the LMS Railway Company, including Restaurant Car (c.1935) by Leonard Campbell Taylor, one of the most successful, expensive and sought-after painters of the period. One of the great revelations of the exhibition is a huge folding screen, nearly six metres long, by Albert Rutherston, showing country pursuits. Made for the Exposition International in Paris in 1937 and bought by the V&A Museum the following year, it has been specially conserved for this exhibition, having been stored away for at least 50 years.
Other artists looked beyond Realism to Surrealism, producing work of painstaking accuracy, but combining unusual objects in strange settings. This section features The Birth of Venus (1934) by Edward Baird and Le Havre de Grâce (1939) by Tristram Hillier, as well as works by Edward Wadsworth and Alan Beeton.
In the last decade a small number of True to Life’s artists have begun to re-emerge from the shadows, however, the exhibition is set to become to the most important ever survey of this fascinating and overlooked subject.
Simon Groom, Director of the Scottish National Gallery of Modern Art, said: “Realist art of the interwar period constitutes one of the highpoints of British art of any era. It’s unashamedly beautiful and technically superb. This is the biggest exhibition of its kind since the Royal Academy Summer Exhibitions of the 1930s and shows the enormous range, depth, and quality of the art of the period. I think visitors will find the work visually stunning and they’ll also make a lot of new discoveries”.