A new exhibition by Bruce McLean ‘MINIMAL INVISIBLE MISSING’ is opening at School Gallery. For the show, McLean has revisited the documentation of early sculptural works that were often temporary or invisible. Four of these sculptures have been reproduced for the exhibition as large black & white photographs mounted on plywood, now taking on their own unique sculptural forms. The revisited works are Floataway Sculpture Beverley Brook 1967, 2 Part Brick Sculpture on Concrete Plinth 1967, Float Around Sculpture Barnes Pond 1969 and Rockskape Largiebeg 1969.

An Editorial in the July/August 2018 edition of Art Monthly wrote “The year following the publication of Robert Smithson’s article (‘Entropy and the new Monuments’ 1966), Bruce McLean staged a series of sub-entropic actions in Barnes, where he was living at the time, that resulted in Six Sculptures, a photographic record of the events, including an image of Floataway Sculpture, which did precisely that.” These works would see McLean included in the ground-breaking exhibition When Attitudes Become Form at Kunsthalle Bern, 1969. 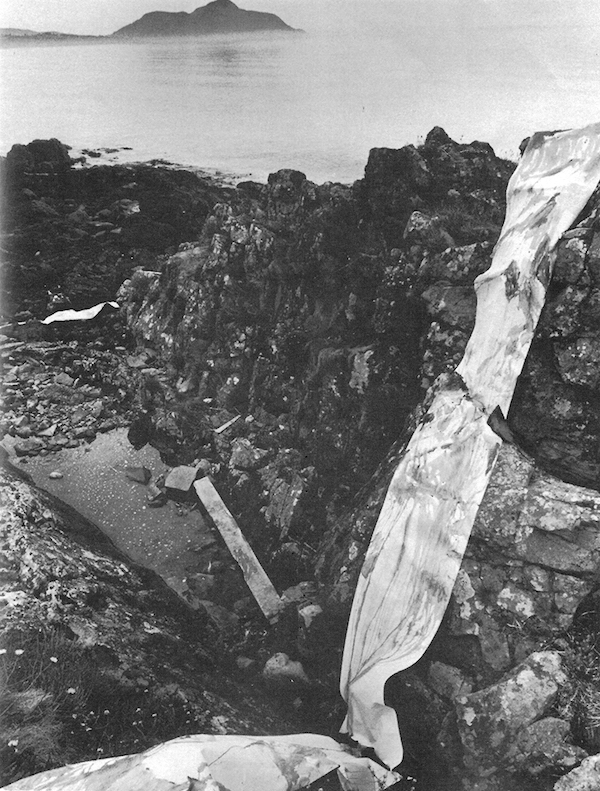 McLean has continually questioned a sculptural forms’ validity, its diverse possibilities of meaning and positioning and its appropriation through additional media – be that photographic, painted, written, verbal or other – and the ways in which these forms are experienced.

In the 2012 exhibition The Shapes of Sculpture at Bernard Jacobson he started a talk/event with the following statement: “Why photograph a sculpture? It is a question that has been asked before and one that I nd myself coming back to again today. Photography, in my early work, necessitated placing my pieces in the street in order to get the whole work captured – but for whom, for where and why? Viewing the work in the street against a brick wall and on concrete paving stones allowed new thinking for me about the placing of sculpture generally. From now on for me, from this mid-1960’s moment, sculpture had to be placed in the street and had to deal with this environment – a passing car, a man walking by with a dog, a woman with a pram etc…”

For MINIMAL INVISIBLE MISSING, the video of the this will be projected in the car park below the gallery space.

Bruce McLean studied at Glasgow School of Art from 1961 to 1963, and at Saint Martin’s School of Art, London, from 1963 to 1966. At Saint Martin’s, McLean studied with Anthony Caro and Phillip King. McLean was Head of Graduate Painting at The Slade School of Fine Art London. He has had numerous one man exhibitions including Tate Gallery in London In reaction to what he regarded as the academicism of his teachers he began making sculpture from rubbish. He has exhibited internationally throughout his working life, including: When Attitudes Become Form, Kunsthalle, Bern, (1969), Venice Biennale International Pavillion, Venice (1970), King for a Day, Tate Gallery, London (1972), Documenta 6 Kassel, Germany (1977), New Spirit in Painting, Royal Academy of Arts, London (1981), Documenta 7, Kassel, Germany (1982), Zeitgeist, Martin Gropius Bau, Berlin (1982), Documenta 8, Kassel, Germany (1987), Out of Sight Out of Mind, Lisson Gallery, London, Process Perspective, Chelsea Space, London (2008), A Book, A Print, A Poster, A Sculpture… Par tt Gallery, Croydon (2010), The Shapes of Sculpture, Bernard Jacobson Gallery, London (2012). Bruce McLean won the John Moore’s prize for painting in 1985. He is represented by Bernard Jacobson Gallery, London.

School Gallery was established in 2018 by Michael Hall, an artist and curator and operates in a gallery at Delta House Studios, a provider of art studios in Wandsworth.