Following the major museum retrospective of Chris Gollon’s music-related works at Huddersfield Art Gallery in 2019, this exhibition focuses on his artistic boundary crossing with singer-songwriter Eleanor McEvoy. Inspired by a song written for him––that was inspired by one of his own paintings––these works on paper and canvas are the last series Gollon painted on a single theme, before his untimely death in 2017.

“Easel painting has been declared dead pretty much since easel painting has existed, but at a time when most people relate to imagery through film, painters must find new ways to relate their work to people.” – Chris Gollon

They are also now the subject of an award-winning documentary short, which––with a contribution from Lloyd Cole––charts Gollon’s collaboration with Eleanor McEvoy; how her lyrics inspired his imagery, and how his paintings inspired a song which she wrote and dedicated to him: ‘Gimme Some Wine’. This song is also now the title track of Eleanor McEvoy’s new album, released on 15th October 2021.

When Chris Gollon came on the art scene in the mid-1990s, many critics were saying painting was dead. Gollon disagreed, and found music to provide an energy, lyrics became footholds for emotions and ideas that lead to new images. However, it was not until 1998, when he, Yoko Ono, Gavin Turk and David Bowie each received a different one-minute tape from Thurston Moore, challenging them to make a work of art in response, which were then shown in ‘ROOT’ at the Chisenhale Gallery, London. This started for Gollon a 19-year fascination with boundary crossing, how one art form can take another into new areas of thought and feeling. In 2005, his ‘Einstein & The Jealous Monk’ (after Bob Dylan’s Desolation Row), was acquired by the Huddersfield Art Gallery, where it hangs with works by Francis Bacon and Sir Jacob Epstein. From 2013-2014, he collaborated with the Grammy-nominated classical musician Yi Yao, and at the end of his life with Eleanor McEvoy. 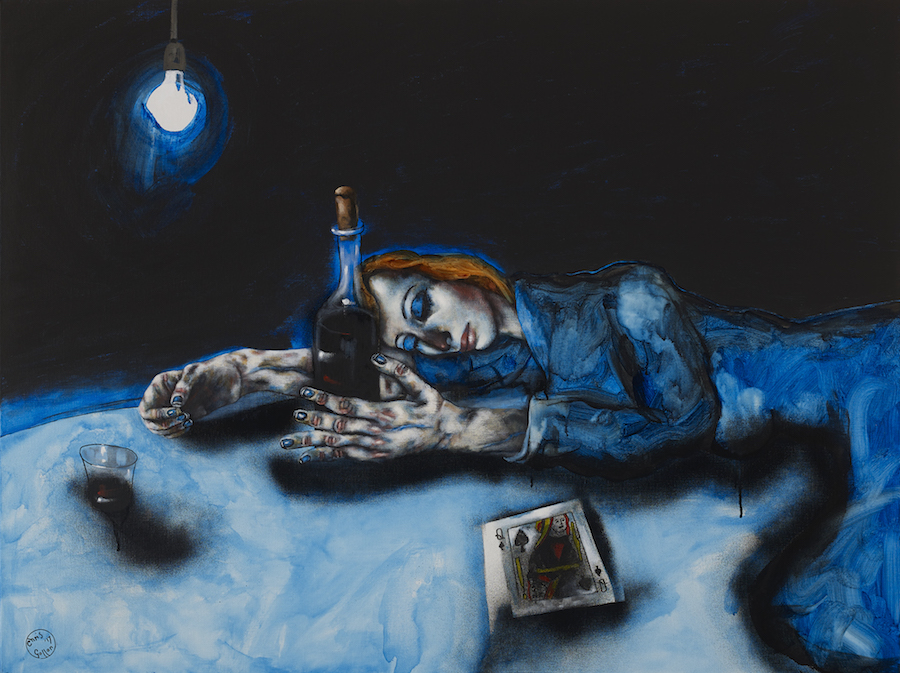 When Chris Gollon came on the art scene in the mid-1990s, many critics were saying painting was dead. Gollon disagreed, and found music to provide an energy, lyrics became footholds for emotions and ideas that lead to new images. However, it was not until 1998, when he, Yoko Ono, Gavin Turk and David Bowie each received a different one-minute tape from Thurston Moore, challenging them to make a work of art in response, which were then shown in ‘ROOT’ at the Chisenhale Gallery, London. This started for Gollon a 19-year fascination with boundary crossing, how one art form can take another into new areas of thought and feeling. In 2005, his ‘Einstein & The Jealous Monk’ (after Bob Dylan’s Desolation Row), was acquired by the Huddersfield Art Gallery, where it hangs with works by Francis Bacon and Sir Jacob Epstein. From 2013-2014, he collaborated with the Grammy-nominated classical musician Yi Yao, and at the end of his life with Eleanor McEvoy.

Art historian Mary Rose Beaumont was the first critic to discover Gollon’s work, writing a positive critique in ART Review magazine in 1994, and then contributing to the ‘Road to Narragonia’ catalogue (1997). Having written on Gollon’s very first series on a theme, she has now written in the exhibition catalogue for his last:

“Gimme some wine!” A cry from the deep –– from one who has plumbed the depths of despair, or merely the desperate call from the habitual drinker who has run short of alcohol?   It is both of these and all the grief and sadness in between.

The trigger for these wonderful paintings was Eleanor McEvoy’s song ‘Gimme Some Wine’ which she composed and dedicated to the artist.   They had had already an exchange of ideas expressed in songs and paintings; she had bought his painting ‘Champagne Sheila’ and he had painted ‘Dreaming of Leaving’ for the inside sleeve of her new album. The latter was the inspiration for her song ‘Gimme Some Wine’ which she dedicated to Chris Gollon. He returned the compliment by painting this astonishing cornucopia of richly nuanced paintings – richly nuanced in the range of emotions which they depict, from a defiant acceptance of the role of alcohol, through a series of sad recognition paintings to the great celebratory ‘Party’, and finally to oblivion. This extraordinary painterly achievement, all made in 2016 and early 2017, with its many and various moods, may be compared to a grand symphony with variations.  Chris Gollon’s figures nearly always express some powerful feeling, be it grief, longing, anger, fear, or quiet resentment shading into resignation. Here too we see emotions laid bare, as skilfully suggested as ever.” 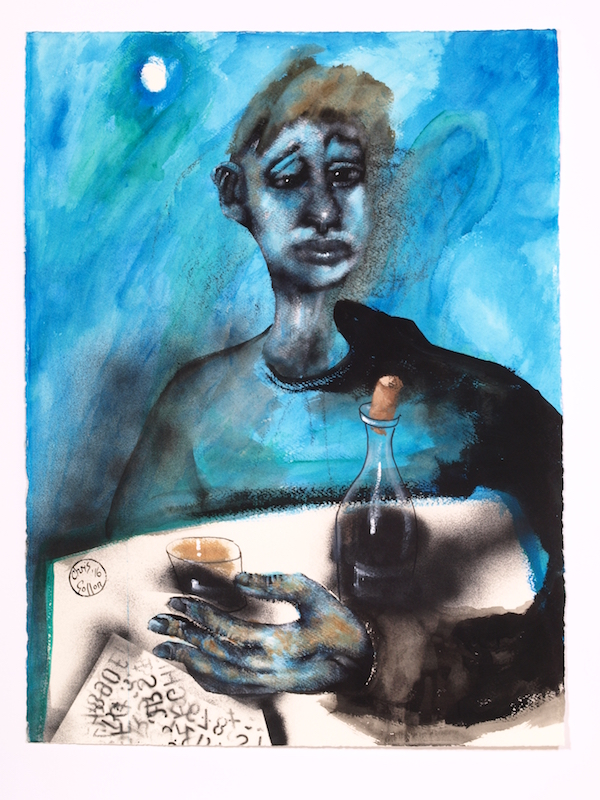 Gollon was a very sensitive painter of women, and mainly a painter of secular imagery. However, his widely-acclaimed national touring exhibition to English cathedrals ‘Incarnation, Mary and Women from the Bible’ shed light even on those women who were nameless, such as Job’s first wife. He was the first painter in art history to paint an image of Judas’s Wife, which he did very sympathetically: receiving news of the forthcoming Crucifixion and holding her husband’s suicide note, she is imploding with grief. His epic series ‘Fourteen Stations of the Cross’, now permanently installed in the Church of St John on Bethnal Green, designed by Sir John Soane, also bring women to the fore, modern, brave women with mascara running, remaining at Jesus’s side to the end.

As Picasso noted, if one takes an image of a mother and child into a church, it becomes religious. Gollon is acutely aware of this, and in some of the Gimme Some Wine images, he draws on his own previous religious compositions and his fascination with The Magdalene. As curator Wilfrid Wright notes: “Here, in the culmination of his last series of works, the painting ‘Gimme Some Wine – Final Version’, like the song that inspired it, is infused with grief (the references to Picasso’s Blue Period are overt). Gollon has borrowed the composition from one of his earlier works, which encapsulates that particular emotion: ‘Magdalene at the Base of the Cross’ (2013), […]. Gollon was interested in Mary Magdalene and the relationship with Jesus, and she became a recurring figure in Gollon’s work, since she embodies both devotion and loss.”

Eleanor McEvoy became a collector of Chris Gollon’s work in 2014, buying ‘Champagne Sheila’. She notes in the catalogue: “When I look at a woman in a Chris Gollon painting, I am overcome with a strange compulsion. I find myself filled with an urge to delve into her life. I get curious about the series of decisions she has made throughout her life to lead us to the point where we now find her, looming large on the canvas before us on the gallery wall, make up smudged, under a bare bulb, a queen of spades visible on the table, but just a little out of reach. I’ve learned that Chris will always hint at a dilemma in the character’s life. You find yourself wondering why there’s a second glass on the table. Is she expecting a lover? Is the lover there, but out of view? Has her lover already left? The bottles of wine are half full and have the cork stuck in the top, but you just know in your heart of hearts that there isn’t much need for the cork… that bottle won’t last until the morning. These were the types of thoughts that inspired the song ‘Gimme Some Wine’.”

Having kick-started Gollon on his 19-year fascination with boundary crossing, the to-and-fro of ideas between music and painting, Thurston Moore wrote in a recent museum exhibition catalogue: “Chris Gollon’s work moves beyond painting as singular expression, where music and its essence of spiritual sentience, comes into accord, creating a personal yet welcoming environment, alive and free. I am proud to have had a moment where we colluded via the gestures of mutual acquaintance. His creative and modest genius is eternal.”

As Gollon himself noted: “Music and painting are, in my view, as with all art genres, seeking the same truth, and that’s what I’ve tried to convey in my paintings.”

The exhibition is curated by Wilfrid Wright, and coincides with the release on October 15th of Eleanor McEvoy’s new album Gimme Some Wine (Blue Dandelion, 2021). 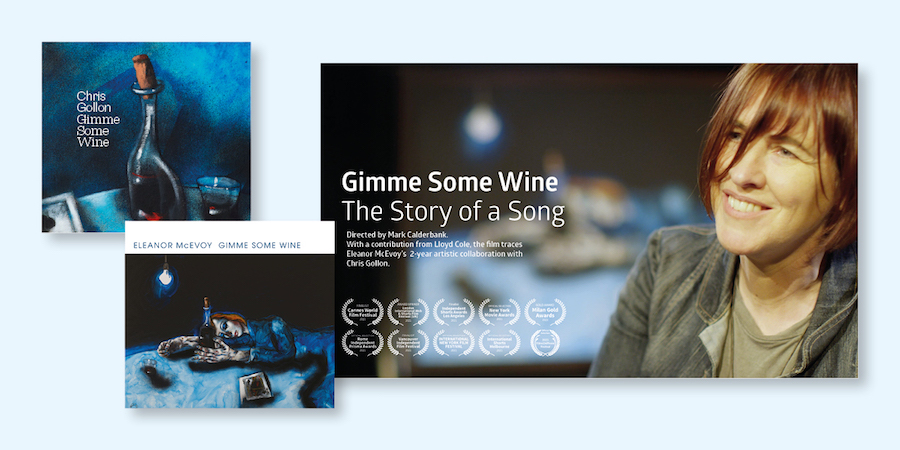 Chris Gollon (1953-2017) enjoyed many solo museum shows and acquisitions, including the British Museum. He exhibited with Bill Viola and Tracey Emin in St Paul’s Cathedral, and also with Yoko Ono, David Bowie and Gavin Turk in ROOT, a crossover exhibition of contemporary music and art created by Thurston Moore of Sonic Youth, at Chisenhale Gallery, London. Gollon’s work was widely reviewed on national BBC TV and Radio, national press reviews, including The Times, The Guardian and the FT, and he features in many art publications. In 2009, Alan Yentob featured Gollon on his BBC1 ‘Imagine’ programme, and the same year he was made a Fellow at the Institute of Advanced Study, Durham University, where he worked with some of the world’s leading thinkers on the Being Human project. His highly-acclaimed Fourteen Stations of the Cross were permanently installed in a Grade I listed church in East London, designed by Sir John Soane. They were subsequently blessed by Richard Chartres, Bishop of London, and his paintings inspired a book Stations of the Cross by Sara Maitland (Bloomsbury, London & New York). In 2010, the monograph ‘Chris Gollon: Humanity in Art’ by art historian Tamsin Pickeral was published, endorsed by Bill Bryson OBE. For his national touring exhibition to English cathedrals (2014 – 2016) entitled ‘Incarnation, Mary and Women from the Bible’, focusing wholly on women from the Bible, he painted the first image in art history of Judas Iscariot’s wife, which attracted much critical acclaim. The acclaim for Chris Gollon’s work continues after his untimely death, with the Grade I listed Romsey Abbey purchasing and installing his St Ethelflaeda diptych in 2018. In 2019, a major museum retrospective of his music-related works ‘CHRIS GOLLON: Beyond the Horizon’ also launched the short film, FIREWALL, made with the Sleaford Mods using Gollon’s imagery. A TV documentary is currently being made on his life and work.

IAP Fine Art holds the artist’s estate and has represented Chris Gollon since 1994.