Conrad Shawcross is mounting one of his largest exhibitions ever at The Mathematical Institute, Oxford. The exhibition, Cascading Principles: Expansions within Geometry, Philosophy, and Interference, brings together more than thirty-five sculptures realised by the artist over the last seventeen years. These pieces, placed across three floors, will co-exist with the Institute’s unique architecture and the intellectual concerns of its occupants as explorers at the boundaries of knowledge. The artworks are placed in public and private areas, forming a web of relationships and correspondences which emerge as the viewer moves through the building—activating various sites, from Paradigms in the reception area to vitrines containing Perimeter Studies in the study and lecture space, these pieces dialogue with the Institute’s everyday use.

The show includes all his manifold geometric and philosophical investigations

Shawcross models scientific thought and reasoning within his practice. Drawn to mathematics, physics, and philosophy from the early stages of his artistic career, Shawcross combines these disciplines in his work. He strongly emphasises the nature of matter, the relativity of gravity, entropy, and the nature of time itself. Like a scientist working in a laboratory, he conceives each work as an experiment. Modularity is key to his process and many pieces are built from a single essential unit or building block. If an atom or electron is a basic unit for physicists, his unit is the tetrahedron. 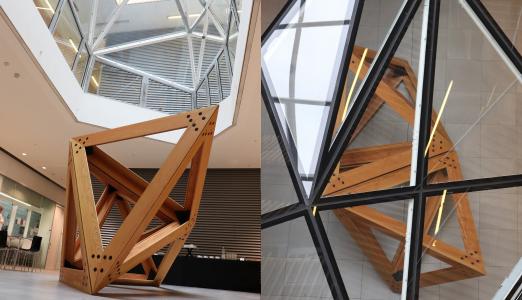 Unlike other shapes, a tetrahedron cannot tessellate with itself. It cannot cover or form a surface through its repetition – one tetrahedron is unable to fit together with others of its kind. Whilst other shapes can sit alongside one another without creating gaps or overlapping; tetrahedrons cannot resolve in this way. Shawcross’ Schisms are a perfect demonstration of this failure to tessellate. They bring twenty tetrahedrons together to form a sphere, which results in a deep crack and ruptures that permeate its surface. This failure of its geometry means that it cannot succeed as a scientific model, but it is this failure that allows it to achieve the cracks full of broad and potent implications as an artwork.

The show includes all his manifold geometric and philosophical investigations into this curious, four-surfaced, triangular prism to date. These include the Paradigms, the Lattice Cubes, the Fractures, the Schisms, and The Dappled Light of the Sun. The latter was first shown in the courtyard of the Royal Academy and subsequently travelled all across the world, from east to west, China to America.

Shawcross constructed his Paradigm series following mathematical logic and a rate of incrementation, which pushed the form to its limit before its imminent collapse. By introducing different growth factors, he formed the Paradigms, which grow from the smallest unit, bearing the weight of the others stacked above it, through the fractal support structure that holds them together. Evolving from this are the Fractures, which again use the dogma of the tetrahedron, but further abstract the form into an expansion composed of hundreds of delicate geometric leaves. On the other hand, Lattice Cubes are each formed of forty-eight irregular tetrahedrons. These tetroids come together to form a rational working system composed of pieces that can theoretically expand into infinity. The work alludes to the theory of the universe expanding from a single radiant point.