The Royal Parks organisation in London has just put a remarkable site up on the Web. It enables the user to explore the long-gone Crystal Palace in Hyde Park. Using a pointer, the computer-user can explore this enormous structure in metal and glass in three dimensions, almost as if it still existed, which of course it doesn’t. All that is missing, and it’s a big ‘all’ are the masses of exhibits that the structure once housed.

There were some 100,000 objects within the colossal building’s 990.000 square feet. While the primary purpose was to display examples of the technology created by the still comparatively recent Industrial Revolution, the building also housed a wide variety of other things, grouped into four categories – Raw Materials, Machinery, Manufacturers and the Fine Arts. There was a hydraulic press and a fire-engine, but also some Sevres porcelain and the Koh-i-Noor diamond. 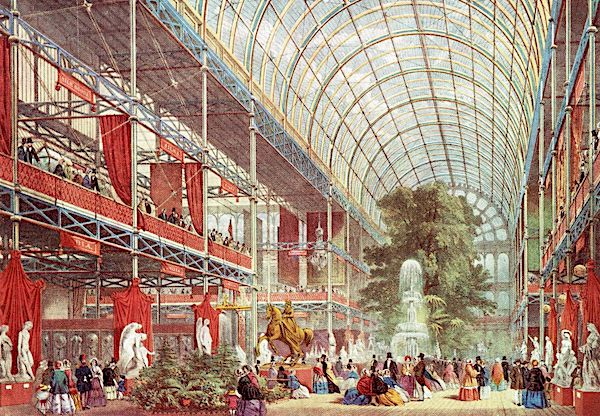 The Crystal Palace Visit in 360º Here

Prices of admission, when the building opened to the public in April 1951, were fixed at £1 during the first week, high enough to deter all but the wealthiest visitors, and were then reduced to 5 shillings. On May 26th they were reduced again – one shilling Monday to Thursday, two shillings and sixpence on Friday, and 5 shillings on Saturday. During its run, which lasted till 11th October, the exhibition attracted over six million admissions, though some of these may have been repeat visitors. It is reasonable to think of it as the ancestor of the blockbuster art exhibitions of the present day. Like them, it featured things that originated from a wide variety of global cultures. Also like them, at least when compared to most of its possible predecessors, it offered a democratisation of access to art. The exhibition actually made a profit – £186,000, the equivalent of more than £20 million today. The money was used to found the Victoria & Albert Museum, also the nearby Science Museum and Natural History Museum, all of which currently offer free entry to their permanent collections.

In this sense, the new Crystal Palace feature on the Web follows an established tradition. In this case too you don’t even have to pay to get in, and the technology does its best to make you feel that you are actually present in the huge structure that Joseph Paxton devised, modelling his design on the greenhouses he had already built for the Duke of Devonshire’s gardens at Chatsworth, while at the same time making use of then new technologies of pre-fabrication. The difference is, nonetheless, that while you get the building, you don’t get the myriad exhibits. There are a few little figures, ghost-like in Victorian dress, who serve to give you the vast scale of the spaces they have been called in to inhabit. Apart from that, nothing – no hydraulic press, no Koh-i-Noor, and certainly no art. Of course, this is due to the technical impossibility of rendering simulacra of this huge multitude of objects, some of which, like the big diamond, are still known to us in the present, but the vast majority of which have vanished irretrievably into the Victorian past.

Somehow this absence seems like a metaphor both for the human absences caused by the current coronavirus epidemic, but also for the emptiness of much contemporary art. More convincingly than William Hazlitt’s description of some of Turner’s watercolours, these screen images are “pictures of nothing, and very like”.