To mark its 25th anniversary, the Estorick Collection is presenting an exhibition of works by the major 20th-century artist Giorgio Morandi (1890-1964).

This the first time, the entire Morandi collection from Italy’s Magnani-Rocca Foundation will be shown together in the UK. Featuring 50 works spanning the artist’s career, it includes oil paintings, watercolours, drawings and prints. The Estorick’s own collection of works by Morandi will also be on display at the museum. Giorgio Morandi: Masterpieces from the Magnani- Rocca Foundation runs from 6 January until 30 April 2023.

Best known for his spare and enigmatic still lifes depicting vases, bottles and flowers, as well as paintings of landscapes located close to his home in Bologna, Morandi is today widely considered to be one of the most significant figures of modern Italian art – and certainly one of the most beloved. Often described as something of a recluse, he was in fact at the centre of contemporary artistic debate and actively engaged with many of the most important national trends and movements of his day, from Futurism to Metaphysical Art. He subsequently went on to develop a distinctive mature style, renowned for its masterful treatment of light, exquisite tonal subtleties and frequent exploration of the boundaries between abstract and figurative imagery. 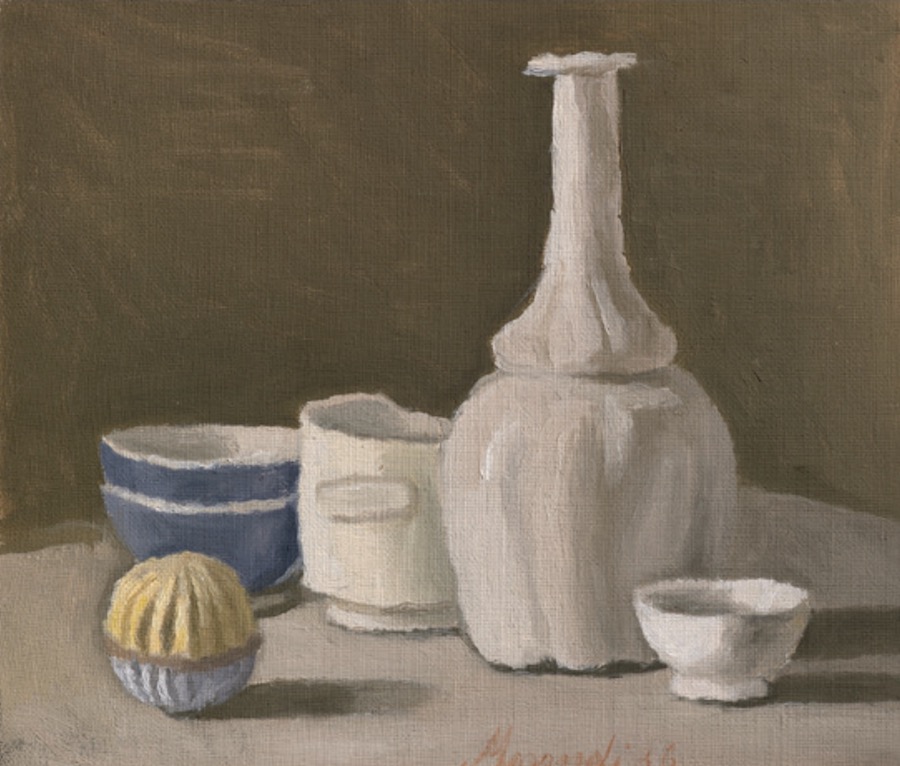 The musicologist, collector, art critic and entrepreneur Luigi Magnani (1906-1984) was one of Morandi’s most prominent patrons and a close personal friend. Having first seen his work at an important retrospective organised as part of the Rome Quadriennale of 1939, he was introduced to the artist the following year by the critic Cesare Brandi, who was a mutual friend. Brandi later observed: “The collection of works by Morandi belonging to Luigi Magnani can boast, first and foremost, of having been entirely constructed during the painter’s lifetime and of being born of the friendship that bound them together, [a significant fact] for those who know how carefully Morandi chose the recipients of his works.”

The first pieces acquired by Magnani were three etchings given to him by the artist shortly after their first encounter, including Flowers in a Small White Vase (1928) and Zinnias in a Vase (1932). Over the following 20 years, Magnani went on to buy directly from the artist, acquiring works spanning Morandi’s entire career. The collection includes a rare self portrait, and a mysterious Metaphysical Still Life of 1918, as well as other rarities such as Still Life with Musical Instruments (1941), the only painting Morandi made to commission. In addition to a selection of seldom seen still lifes, the collection also includes several landscapes, one of which depicts the view from the artist’s studio, and views of Grizzana in the Apennine Mountains where he spent his summer holidays. Several drawings and watercolours will also be on display – all of which are masterpieces of concision – alongside a significant number of the artist’s etchings. With their extraordinary ability to capture nuances of tone, light and shade, the latter demonstrate his mastery of the medium of printmaking, which he taught for several years at Bologna’s Academy of Fine Arts.

The Magnani-Rocca Foundation was established in 1977 by Luigi Magnani in memory of his father Giuseppe and his mother Donna Eugenia Rocca. Luigi Magnani donated the Villa in Mamiano di Traversetolo (Parma) to the Foundation; it opened as a museum in 1990 to house his collections of art and furniture, with a mission to ‘promote the dissemination of culture and art intended as tools for the growth of civil society’.

The Estorick Collection of Modern Italian Art is internationally renowned for its core of Futurist works. It comprises some 120 paintings, drawings, watercolours, prints and sculptures by many of the most prominent Italian artists of the modernist era. There are six galleries, two of which are used for temporary exhibitions. Since opening in 1998, the Estorick has established a reputation and gained critical acclaim as a key venue for bringing Italian art to the British public.