A new show made up of four large-scale tapestries, as well as material related to his full-scale House for Essex (2015), will be unveiled at Firstsite Essex 18 November. The building designed by Perry in collaboration with Charles Holland of FAT Architecture is an ornate ceramic-clad, gingerbread-like edifice, A House for Essex serves as a secular chapel to the memory of a fictional Essex woman, Julie Cope. Situated overlooking the scenic Stour Estuary in the village of Wrabness in north-east Essex, the House is both an artwork in itself and the setting for some works by Perry that explore the special character and unique qualities of the county. A House for Essex was commissioned by Living Architecture, which was founded to change public perceptions about modern architecture by building houses that are rented by the public for holidays.

‘The show represents, “The trials, tribulations, celebrations and mistakes of an average life.” – Grayson Perry

The exhibition at Firstsite will be a unique presentation consisting of tapestries, woodcuts, ceramics and tiles designed for the House as well as sketchbooks and photographs that chart its development. Included are The Essex House Tapestries: The Life of Julie Cope (2015), on loan from the Crafts Council Collection. The two major tapestries illustrate the key events in the protagonist’s journey, from her birth on Canvey Island during the great good of 1953 to her untimely death in a tragic accident on Colchester High Street. Over owing to cultural and architectural detail, the tapestries contain a social history of Essex and modern Britain that re ects Firstsite’s year-long focus on contemporary identity. 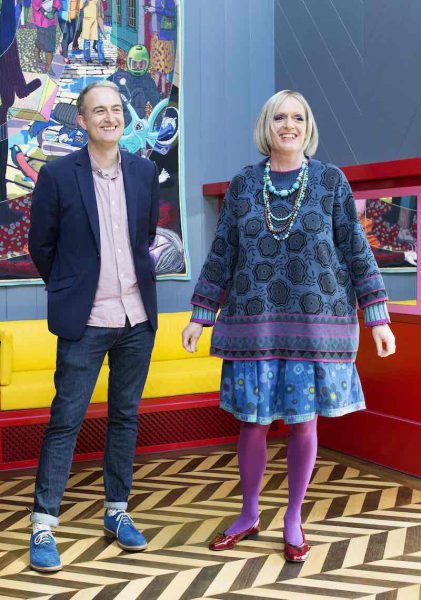 The rest, A Perfect Match (2015) is centred upon Julie’s conventional early life and ultimately doomed relationship with her first husband, Dave. The second, In Its Familiarity, Golden (2015) depicts Julie’s ‘second act’, in which she takes control of her life and widens her horizons. She relocates to Maldon with her children and attends university in Colchester, where she meets her second husband, Rob. Together Julie and Rob share a profound happiness that lasts until her sudden and untimely death at the age of 61, the result of a freak accident with a curry delivery scooter. It is this shocking incident that prompts Rob to build a ‘temple’ in memory of his beloved Julie – the ‘Taj Mahal upon the Stour.’

The two further tapestries, made for the bedrooms at A House for Essex, are portraits of Julie and her life with each of her husbands: Julie and Rob (2013), and Julie and Dave (2015). Also included in the show is a series of black and white woodcuts, entitled Six Snapshots of Julie (2015), which depict the six decades of Julie’s life.

The tapestries and woodcuts are displayed alongside an audio recording of The Ballad of Julie Cope, a 3000-word narrative written and read by Perry that builds upon his childhood in Essex to illuminate Julie’s hopes and fears as she journeys through life. When writing Julie’s biography, Perry looked to the English ballad and folktale tradition, narrating a life that conveys the beauty, vibrancy and contradictions of the ordinary individual.

These artworks represent, in Perry’s words, ‘the trials, tribulations, celebrations and mistakes of an average life.’ Historically, large-scale tapestry provided insulation for grand domestic interiors; here Perry has juxtaposed its associations of status, wealth and heritage with the concerns of class, feminism, social aspiration and taste. To create the tapestries, Perry first sketched on a computer, then worked closely with a digital mediator and tapestry weavers to translate the vivid colour and detail of his original drawings into a woven textile.

Both Grayson Perry and Charles Holland grew up in Essex, and the building was designed to evoke a tradition of wayside and pilgrimage chapels – including the nearby seventh-century St Peter-on-the-Wall at Bradwell-on-Sea – while charting Julie’s life from Canvey Island to Wrabness, traversing Essex and various socioeconomic boundaries. It is clad in a pattern of green and white tiles that depict totems of Julie’s life: a nappy pin, a mixtape, a heart, a wheel, a letter J, the Essex county badge and a pregnant Julie imagined as a goddess-like fertility symbol. A Julie Tile (2014) as well as mouldings for several others will be shown at Firstsite.

Engaging with notions of Britishness, decoration and architectural history, the project has been described by Holland as a radical statement about the capacity of architecture for narrative and communication to tell a rich and complex story – that of the ‘Essex Everywoman’ Julie Cope. A riotous exhibition of joy and colour, The Life of Julie Cope celebrates the extraordinary in the ordinary.

Says Firstsite Director Sally Shaw: ‘The Life of Julie Cope is an intimate and personal exploration of an ‘average’ life – one which is made all the more poignant by the fact that Grayson Perry’s artistic creation is, like himself, from Essex. The protagonist’s life story, as told through the various works, is both sad and funny, re active and rowdy, real and surreal, triggering re actions in the minds of the viewers that transcend the subject matter. Grayson Perry is one of the most renowned British contemporary artists, and we are honoured to be staging this major presentation of his work at Firstsite.’