Gustave Moreau (1826-98) is one of the most brilliant and influential artists of the French Symbolist movement, and this exhibition reveals some of the most extraordinary works he ever made, unseen in public for over a century.

In collaboration with the Rothschild family and Musée National Gustave Moreau, Paris, the exhibition will reveal 34 watercolours, created by Moreau between 1879 and 1885, for the first time since 1906. They were part of a series commissioned by the art collector Antony Roux to illustrate the 17th-century Fables of Jean de La Fontaine. The works are on loan from a Rothschild family collection. 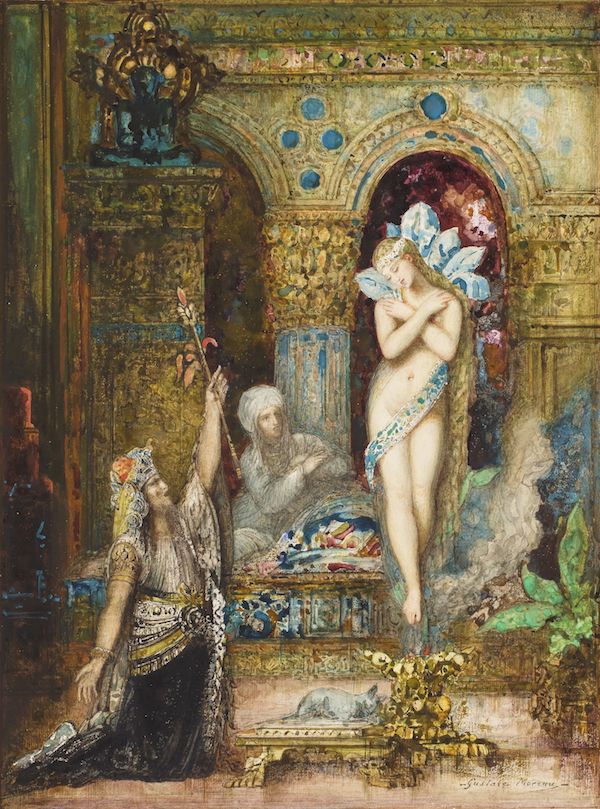 The watercolours were exhibited to great acclaim in the 1880s – in Paris and in London, where critics frequently compared the artist to Edward Burne-Jones. Moreau produced 64 works for the series, 63 of which subsequently entered the collection of Miriam Alexandrine de Rothschild (1884-1965); however, nearly half were lost during the Nazi era. The surviving works have not been exhibited since 1906 and only a handful has ever been published in colour.

Created at the height of the French 19th-century revival of watercolour, the variety of subject matter, technique and their colouristic effects will be a revelation to visitors. One early commentator wrote that it was as though their creator ‘was a jeweller before he was a painter and who, drunk on colour, had ground up rubies, sapphires, emeralds, topazes, pearls and mother-of-pearl to make his palette.’

While many of La Fontaine’s fables will be familiar to British audiences from Aesop’s fables, others are derived from traditional European and Asian stories. Moreau’s translation of La Fontaine’s pithy, canonical work into his own, highly distinctive visual language will surprise and delight. There are scenes of comedy, satire and tragedy, and the stylistic range of the watercolours encompasses historicism and the picturesque, Orientalist fantasies and near-abstract chromatic experiments. Visitors will enjoy spotting the influence of earlier artists, among them Leonardo da Vinci, Turner, Delacroix, Gericault and Hokusai. British critics in the 1880s praised the series; one described the works as full of ‘witchery and enchantment’; another commented on Moreau’s ‘keen apprehension of the weird’.

The Fables watercolours form the core of Waddesdon display, with additional loans from the Musée Gustave Moreau. Preparatory drawings for the Fables will demonstrate the research that informed Moreau’s finished works, from drawings he made after nature to illustrations he found in newspapers – all demonstrating his mastery of materials, including chalk, ink and graphite. A particularly compelling group of drawings depicts animals made in the Jardin des Plantes, including several sheets of monkeys, elephants and lions. Also on display will be one of Moreau’s most famous oil paintings, The Unicorns (1885), commissioned by Baron Edmond de Rothschild, but which in the end the artist refused to give him. Prints after Moreau’s Fables by Félix Bracquemond demonstrate the translation of the jewel-like colours into velvety monochrome in some of the most innovative etchings of the age.

This exhibition in Waddesdon Manor, housing a collection created by four generations of Rothschilds, will celebrate more extensive Rothschild links with Moreau. The display will include two little-known watercolours by the artist, which were acquired by Baron Edmond de Rothschild (1845-1934), the father of Miriam Alexandrine (who owned the Fables watercolours), and also of James A. de Rothschild (1878-1957), who inherited a third of his father’s collection and bequeathed Waddesdon to the National Trust.

Gustave Moreau: The Fables is curated by Dr Juliet Carey, Senior Curator Waddesdon Manor. She says “I still remember the excitement of looking at Moreau’s Fables watercolours for the first time, knowing that they had not been seen in public for over a hundred years and I am thrilled that visitors to Waddesdon will experience something similar. It is wonderfully appropriate that this exhibition is happening at Waddesdon, a place with strong links to the artist and a treasure trove of French art.

There are few works by Moreau in British public collections so that these superlative examples will be a revelation.” A version of the exhibition will open at the Musée National Gustave Moreau, Paris, in November 2020.

Marie-Cécile Forest, Director of the Musée National Gustave Moreau, says “The MNGM, installed in the artist’s own house, possesses more than 25,000 of his works by him. The museum also preserves all the preparatory drawings for the Fables of Jean de La Fontaine, as well as the watercolour Le Paon se plaignant à Junon [The Peacock Complaining to Juno], which was given to the museum in 1936 by Miriam Alexandrine de Rothschild.”

A book by Juliet Carey and published by Paul Holberton will accompany this exhibition. Musée National Gustave Moreau, 14 rue de La Rochefoucauld, 75009 Paris. The museum, installed in the painter’s family home has managed to retain all the magic of its original house-studio atmosphere. It is located in the heart of Nouvelle Athènes, in the 9th arrondissement at the foot of Montmartre. The apartments on the first floor form a small sentimental museum displaying family portraits and works given to Moreau by his friends Théodore Chassériau and Edgar Degas. The second and third floors are taken up with huge studios, containing hundreds of paintings and watercolours. The walls are covered with over four thousand drawings that give a broad perspective of the techniques and subjects of the undisputed master of French Symbolism.