Always On My Mind, curated by Harry Pye, is a group exhibition at the Fitzrovia Gallery in London’s West End from 27-30 July and includes work by Nick Cave, Billy Childish, James Johnston (Gallon Drunk) and Francis Macdonald (Teenage Fanclub). The exhibition, built around the Elvis Presley hit single from 1972, is a point of creative entry for some artists from a fascinatingly diverse field, including; Twinkle Troughton, Magda Archer, Gordon Beswick, Sasha Bowles, Matthew Collings, Alice Herrick, Corin Johnson, Kate Murdoch, Carson Parkin-Fairley, Elena-Andreea Teleaga and Tracey Williams. The prompt gives rise to a wide variety of approaches, some closer to Elvis himself, with others spreading out creatively to incorporate meditations on broader music themes and the psychology of the Mind and philosophy. Each artist has, in other words, attacked the theme in their own way, but all revolve around the central axis point of one of the world’s great musical icons: Elvis Presley.

In times of trouble, he says, he turns to art and artists: ‘There is something about the way their minds work that I am in love with.’ The poster accompanying the show presents all sixteen artists, eyes shut but each presenting a slightly different, delicately nuanced mood from restful to tormented. These fleeting emotions underline the exhibition’s primary purpose, initially devised by the National Brain Appeal, to raise much-needed funds for The National Hospital of Neurology and Neurosurgery and the UCL Queen Square Institute of Neurology – both world leaders in the field. 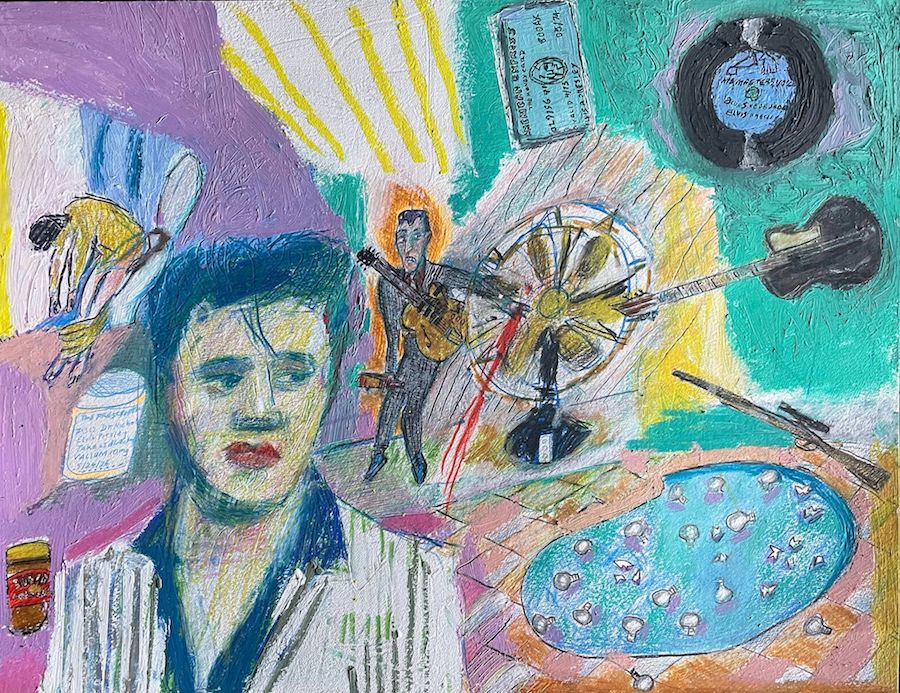 It is noticeable that most artists portray Elvis in his beautiful youth rather than as the bloated bum he so tragically became. And no matter where you lie in the Elvis appreciation spectrum, there will undoubtedly be some aspect of Elvis’ personality to suit you, whether represented by collage, drawing, installation or photography and from painting to prints and sculpture. One particularly striking image, subtly reminiscent of the work of Warhol, is a painted contact sheet showing 24 casts of Elvis’ head, each slightly modified, by London-based Alice Herrick. ‘Elvis was a great beauty,’ says Herrick, ‘and studying his face makes me wonder again at the infinite variety of features, proportions and expressions of the human face.’

Or try the work of Sasha Bowles, who works ‘across mediums to create paintings, artefacts and provisional environments that are a means of storytelling but are not a narrative.’ A work by the singer, poet, author and Bad Seeds frontman Nick Cave, with Elvis, wittily presented as somewhere between an egg cup and a Subbuteo player, recalls the effect that the movie This Is Elvis had on him in 1981. The Prez’s Gospel songs from the 70s had always influenced him, but, says Cave, ‘the last ten minutes of This Is Elvis changed my ideas on performance forever.’ The Ramsgate-based Carson Parkin Fairley’s ethos runs flatly against today’s disaster agenda. ‘There’s so much to people’s lives we don’t see, and everyone’s stories are so fascinating,’ she says regarding the neat, effete, quiffed Elvis, portrayed as too young to be entirely mysterious, but with his eyes – a little darker than they might have been – reaching perhaps further out than they should. That was why ‘it was a real joy researching and creating this ode to Elvis’ life with all its nuances.’

Twinkle Troughton’s playful print The Elvis Impigeonator is the work of a confessed animal lover whose love of wildlife might extend further than most. (Cradling a dead shrew, anyone?) The Elvis Impigeonator presents Elvis at his most resplendent because it says its creator it’s a pigeon who isn’t constrained by its scavenger reputation. It’s dreaming big. It sees a life where it can be Elvis. And why not?’

Not all artists have chosen Elvis, but all have approached the Mind in their ways. The Eternal Now is by the mercurial Billy Childish – a description that could be applied to most of the 16 artists on display here. It recalls a trip to Paris with his son, then 15, to see the Van Goghs at the Musée d’Orsay. His other work, Two States of Mind, was done after bouts of prescription and natural medication after a serious breakdown, which he describes as ‘tipping between normal me and desolation me.’

Gordon Beswick’s contribution is a series of six small paintings that evokes ‘repetition and the inability to come up with new ideas. His non-figurative paintings celebrate patterns and colours that were therapeutic for him to make and are therapeutic for us to look at.

Brixton-based artist Tracey Williams is exhibiting a set of photos which are views from her kitchen window during the lockdown. She explains: “It’s about finding magic in the mundanity of life.”

You may be surprised by the sheer volume of textures and treatments, yet you may learn something about your brain – or Elvis – that you had not known. And you will be helping a very worthwhile charitable foundation. So maybe, in contrast to Elvis’ landmark hit, it’s time to encourage people to have a little more conversation…