London-based artist Jessie Brennan has been commissioned to develop four new, temporary public artworks exploring the nature of life and work in the Royal Docks.

The commission – which has been curated and produced by UP Projects – is the first in a series of creative interventions to engage local people in the transformation of the Royal Docks, London’s only Enterprise Zone. In June 2018, the Mayor of London, the Mayor of Newham and London’s Local Economic Action Partnership (LEAP) approved an ambitious £314m delivery programme to support the redevelopment of the Royal Docks. 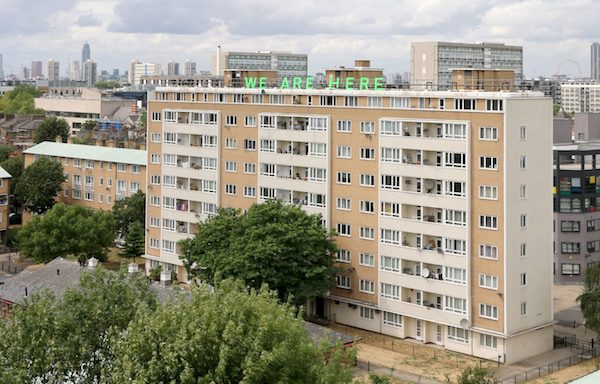 Launching on 5 September 2019, artworks will be presented at four “gateway” sites into the Royal Docks which are accessible by foot, car, and train: Victoria Dock Road beneath Silvertown Way where the DLR arrives into Royal Victoria Station; Dock Road underpass; Custom House station, and the Royal Docks Adventure opposite London City Airport.

Jessie Brennan is a visual artist whose previous projects have focused on public housing and the politics of Regeneration. Her practice is research-led and situated, exploring relations between places and people taking the form of drawing, photography, installation, performance, film, writing and publications.

Since her appointment in October 2018, Brennan has engaged the communities around these four gateway sites to research, explore and understand the historical and economic factors that have impacted the area and shaped its identity. The resulting artworks weave together text, newly generated images and archival material to create a series of large-scale wall-based works that have developed through dialogue Brennan has had with people who live and work in the area.

For Victoria Dock Road tunnel, Brennan has produced an artwork titled Go The Distance, with Peacock Gym. Founded in 1978, it is one of London’s most respected community boxing gyms with former members including Frank Bruno and Lennox Lewis. Peacock Gym focuses on improving mental and physical health with its ethos of “education through sport.” Brennan will transform images from their archive to create a collaged text-based piece that reflects the community’s history.

Working in close collaboration with current and previous residents, Custom House is Our House will be installed on the two-storey wall facing Custom House station. Following sessions run in partnership with community organisation PEACH, Brennan has created a photographic portrait which brings together individuals who live, work, or own businesses in and around Freemasons Road – a site proposed for redevelopment.

At Royal Docks Adventure, a charitable organisation offering sporting opportunities to local people of all ages and abilities, Brennan is installing the evocative phrase Take Your Place in huge letters across the façade of the building. The phrase draws upon her conversations with the sporting community who use the centre regularly and can also be read as a call to action – encouraging locals and visitors to engage with the centre and its future. A photograph of a sunset over the Royal Docks, shared by a member of the London Otters – an LGBTQI inclusive rowing club and regular users of the Docks – has inspired the colour palette of the text. The artwork will be visible to those travelling on the DLR.

UP Projects support artists to do work that has social relevance, encourages learning, transforms places and activates the public realm. They strive to commission work that is relevant to the places they work in and people that they work with. Having already undertaken extensive work in Newham working with Sonia Boyce on the Trackside Wall Commission with Crossrail, UP Projects are pleased to be continuing to work in this unique part of London, which is currently undergoing significant change as part of London’s largest regeneration project.

The planned Royal Docks investment programme, to be carried out over five years from 2018/19, will support the comprehensive regeneration of the Royal Docks over the next five years. The £314m redevelopment will revive it as a distinctive location for business and culture that nurtures highly skilled and highly productive jobs for Newham residents and Londoners.

As part of the Royal Docks regeneration, an innovative and engaging cultural and community programme will put the local community at the heart of the area’s redevelopment, engaging them in their surroundings and celebrating the area’s unique heritage and future.

The commission will launch at all four sites on Thursday 5 September 2019. There will be a guided walk on Saturday 28 September, where guests can join artist Alberto Duman to gain further insight into each of Brennan’s artworks and the context of the Royal Docks.

Jessie Brennan is a visual artist whose previous projects have been concerned with public housing and the politics of Regeneration. Her practice is research-led and situated, exploring relations between places and people, and the social and political contexts that they inhabit. Brennan graduated from the Royal College of Art in 2007. She has exhibited extensively in the UK and Europe, and her work is held in public and private collections including the Victoria & Albert Museum, London, and The Metropolitan Museum of Art, New York City. Recently selected exhibitions include: Re: development – Inside The Green Backyard, Carroll/Fletcher Onscreen, London (solo, 2017); If This Were to Be Lost, Dalla Rosa Gallery, London (solo, 2016); RESIDENT, City Gallery & Museum, Peterborough (2016); Progress, The Foundling Museum, London (2014); Talents Contemporains, François Schneider Foundation, France (2014); Coup de Ville, WARP, Belgium (2013). Her authored books include Regeneration! (2015) And Re: development (2016). In spring 2017, the South London Gallery (SLG) invited Brennan to collaborate with residents on a project titled YOUR WORDS as part of their inaugural Open Plan residency on Pelican Estate.