Jonny Green explores gender politics and portraiture for his first solo show at New Art Projects. The starting point for his most recent paintings was when he heard news from a Polish friend in 2020 that the Polish government had started introducing draconian laws designating ‘LGBT-free zones’.

So, he took three society portraits by John Singer Sargent (1856-1925) of women depicted resplendent in their finery and painted each one as men. Each painting was then given a Polish name with a specific meaning Leonek- (Strong as a Lion), Ondrey (Manly) and Gerek (Ruler with a spear).

Since making the first three works, his interest in Edwardian portraiture and gender politics has moved and developed to form this exhibition. The life of John Singer Sargent, and his paintings in particular, with their implicit assumptions of the sitters’ privilege and wealth, have fascinated Green. The trappings of wealth and the ephemera displayed around Sargent’s sitters speak clearly and broadly about the values of his time and about the high society he wished to portray. 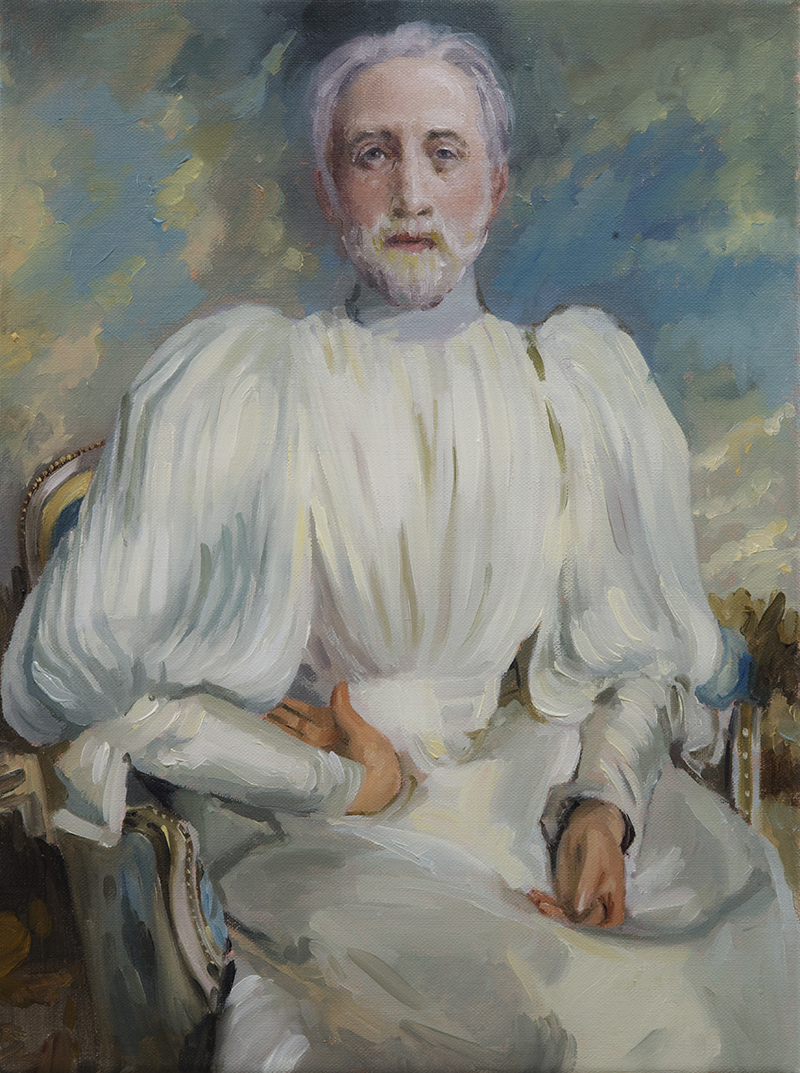 Jonny Green was especially drawn to a portrait of Vernon Lee, a pseudonym for Violet Paget (1856-1935) in the Tate Gallery. Paget, a lifelong friend of Sargent, was a ‘lesbian writer of supernatural fiction’ who during her life refused to be labelled as a lesbian, despite always dressing ‘à la garçon’. The sexual ambiguity of this picture and its sitter is extraordinary for its time. Sargent, a lifelong bachelor, was involved in a moneyed group of Central European intellectuals and free-thinkers. They were more accepting and more radical than the society of the time and included many gay men, flamboyant performers and scholars. Sargent was very comfortable with all of them.

Green has reexamined Sargent’s world and the milieu inhabited by his circle at a time when gender pronouns and identity is being questioned again. In our current climate, gender fluidity is more open and more recognised, with many public figures declaring themselves to be somewhere on a spectrum that defies categorisation and where a new generation believes in acceptance and inclusion outside of traditional gender binaries.

These paintings also refer to Marcel Duchamp and his alter ego Rrose Sélavy. The character of Rrose was Duchamp’s project to destabilise the viewer’s perception of him as an artist. By becoming “Rrose,” Duchamp played with contemporary 1920s drag conventions, and by adopting a woman’s persona, Duchamp undermined the typical male or ‘heroic’ connection between the artist and his work. “Rrose Sélavy” (“The erotic is life”) proposes that the sexual power of an artist might not necessarily come from an Orphic tradition and that the origins of both artistic creation and sex are more fluid. For this exhibition, Green has instead flipped the gender of the sitter, suggesting that the role of the society doyenne is equally as fluid.

When making these paintings, Jonny Green has used a combination of digital collage and artificial intelligence to re-gender these sitters. However, he has intentionally avoided satire, and he has struggled to make them sympathetic and avoid any sense that they may appear ridiculous or funny. The resulting pictures look right and natural and seem to exist as society portraits that co-exist with and within their age. The result is a playful look and antidote to the emerging far-right politics that seek to re-write the history of a more fluid time and place. Instead, he offers a playful glimpse into a world of freedom that might have existed behind closed doors but that began to change both art and society into the world we know today.

Jonny Green was born in North Yorkshire, He is a graduate of Norwich School of Art and The Royal College of Art. His work is represented in Private and public collections all over the world including MIMA and Hull City Art Gallery. Jonny Green currently lives and works in Newcastle Upon Tyne.