A new exhibition, Friends and Relations: Lucian Freud, Francis Bacon, Frank Auerbach, Michael Andrews, has been announced by Gagosian London. Opening on 17 November at the galley’s Grosvenor Hill location, the show will explore artists that were part of a vibrant Post War bohemian sub-culture.

Taking as its inspiration a famous John Deakin photograph from 1963 that shows the four painters in Soho (along with much younger painter Timothy Behrens, the subject of a portrait by Freud that is on view), the exhibition includes some of the artists’ portraits of each other, elucidating the connections between their respective practices.

Curated by art historian Richard Calvocoressi, Friends and Relations contextualizes key works by four era-defining artists. Featuring about forty paintings from private and public collections, it positions Freud—in the centenary year of his birth—as the grouping’s central figure. Each painter was aware of the others’ practice, to the extent of occasionally competing with one another, but of the four, Freud alone collected his friends’ work. At his death, he owned fifteen paintings and many works on paper by Frank Auerbach. In addition, the exhibition includes two portraits by Auerbach, formerly in Freud’s collection, on loan from British museums. 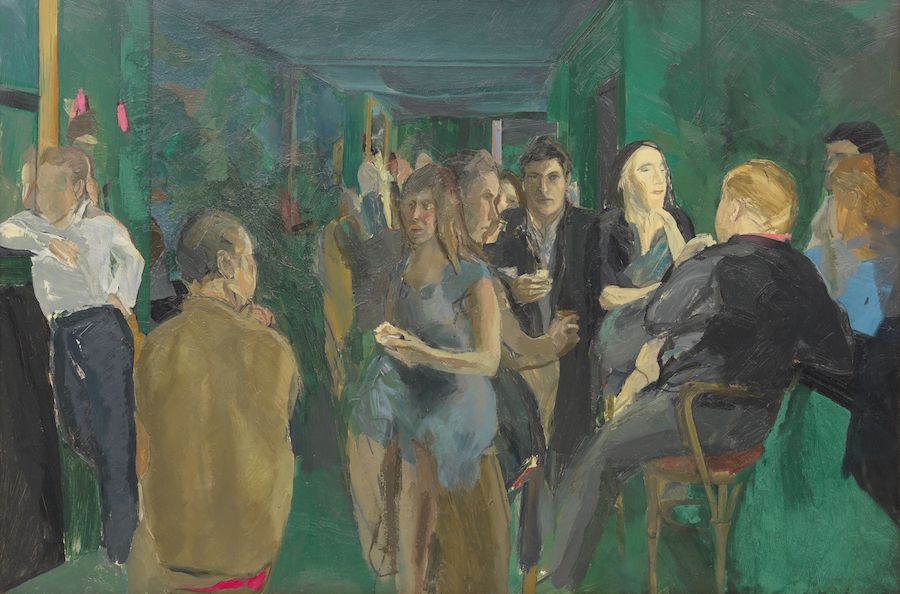 Portraiture was at the heart of Freud’s, Bacon’s, Auerbach’s, and, less directly, Andrews’s practices, and the exhibition’s title echo not only the four artists’ camaraderie, but also intimate relationships between artist and sitter, which here includes artist and lover, partner, and offspring. Girl in a Dark Jacket (1947) exemplifies Freud’s crisp early style and depicts Kitty Garman, his first wife and the daughter of sculptor Jacob Epstein and Kathleen Garman; Naked Portrait on a Red Sofa (1989–91), praised by his friend, photographer Bruce Bernard, as “one of Freud’s most audacious and sensitive works,” shows the reclining figure of the artist’s daughter, Bella. Finally, the Painter’s Mother Resting III (1977) is an early entry in a series of portraits of the artist’s mother, Lucie Freud, which he began after the death of his father, Ernst Freud, in 1970. 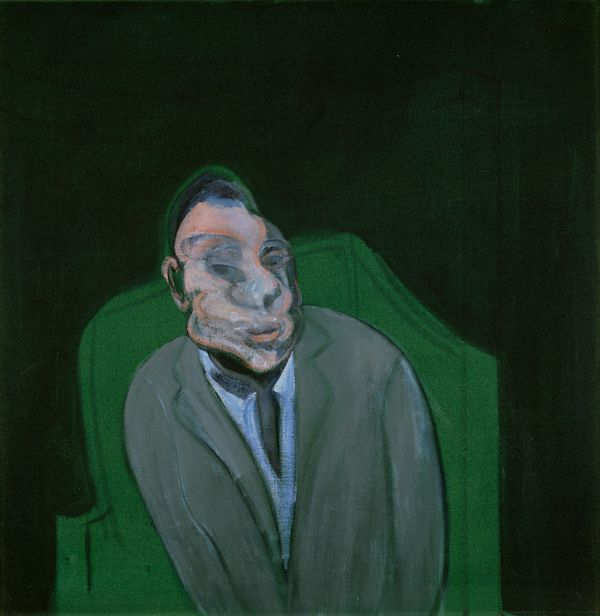 The intense friendship between Freud and Bacon is commemorated in the latter’s Three Studies for Portraits: Isabel Rawsthorne, Lucian Freud and J.H. (1966), in which Freud’s head is paired with those of John Hewitt, an antiquities dealer, and Rawsthorne, a close friend and fellow artist whom Bacon painted many times. Another highlight is Portrait of a Man Walking Down Steps (1972), a tribute by Bacon to his lover George Dyer, who committed suicide the year prior, the day before the opening of the artist’s 1971 retrospective at the Grand Palais, Paris.

A selection of Auerbach’s work includes E.O.W., S.A.W. and J.J.W. in the Garden I (1963), a full-length portrait of his lover and frequent model, Stella West, and her family outdoors. Also included is Head of Gerda Boehm (1964), which depicts Auerbach’s cousin, who was, like him, a refugee from Nazi Germany. On loan from the Sainsbury Centre, University of East Anglia, in Norwich, the work’s dense accretion of paint epitomizes Auerbach’s approach during this era.

Michael Andrews’s ambitious group portrait The Colony Room I (1962) is on loan from Pallant House Gallery, Chichester. Set in Soho’s storied drinking club, it pictures Andrews’s mural in the background, with figures of Freud, Bacon, Bruce Bernard, artist’s model Henrietta Moraes, and the club’s proprietor, Muriel Belcher. Melanie and Me Swimming (1978–79), loaned to the exhibition by the Tate, depicts the artist teaching his daughter to swim in Scotland.

The exhibition includes a fully illustrated catalogue featuring essays by Martin Gayford and Florence Hallett and an interview with Frank Auerbach by Richard Calvocoressi.

Also on view at Grosvenor Hill will be a selection of photographs of the four artists by their friend, the distinguished picture editor, writer, and photographer, Bruce Bernard (1928–2000). Complementing the paintings in Friends and Relations, Bernard’s portraits of the artists in their studios—some of which are exhibited publicly for the first time—are both direct and informal. The painter Virginia Verran, who represents Bernard’s estate, notes: “The link between painting and photography was a vital one throughout his life and the chance to bring his photographs together with paintings in this way is a profound one.”