This year the exhibition is back with a diverse collection of artists from around the world. Works can be purchased on the website and delivered directly to your home. Founded in 2018 by leading art consultancy ARTIQ, Queer Frontiers is an annual charity exhibition featuring work by international LGBTQ+ artists and allies. Previous years saw ARTIQ partnering with London Pride and Hiscox and raise more than £30,000 for non-profit organisations such as Albert Kennedy Trust and Switchboard. Visit Exhibition

This year’s selection of artists celebrates and explores queer narratives

Past editions of Queer Frontiers involved pop-up spaces in iconic locations across Soho, to exhibit outstanding work by emerging and established international artists. This year’s theme is self-expression. With the postponement of Pride in London until next year, and for queer artists, already underrepresented in galleries and museums, the consequences of continued closures could have serious financial implications. 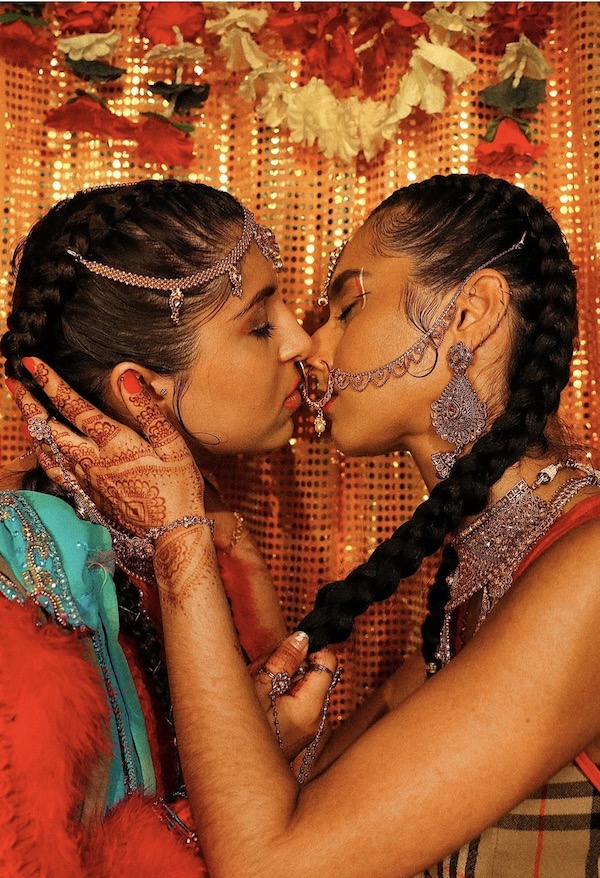 That’s why ARTIQ is taking Queer Frontiers online, in collaboration with Sassy Digital and Hiscox, to showcase another incredible selection of works. The goal is to raise funds for East London based charity Renaissance Foundation who help young people in hospitals, students at risk and young carers.

This year’s selection of artists celebrates and explores narratives including female strength, queer survival, nature and spirituality, featuring a variety of styles, media and techniques. From resin and Perspex 3D pieces, pigment transfers and paintings, photography and documented performances to digital collage.

Here are some of the top picks from the exhibition:

Henry Hussey graduated with an MA in Textiles at the Royal College of Art in London. His work has been exhibited in cities across the UK and internationally including London, New York and Hong Kong. His works, often textile pieces and sculptures, are deeply personal and emotionally raw. Whether through a vocabulary of quasi-mythological symbols or in embroidered lines of text extracted from performative situations, Henry seeks to create expressions of perceived truth in response to aggravating relationships and events from his life. 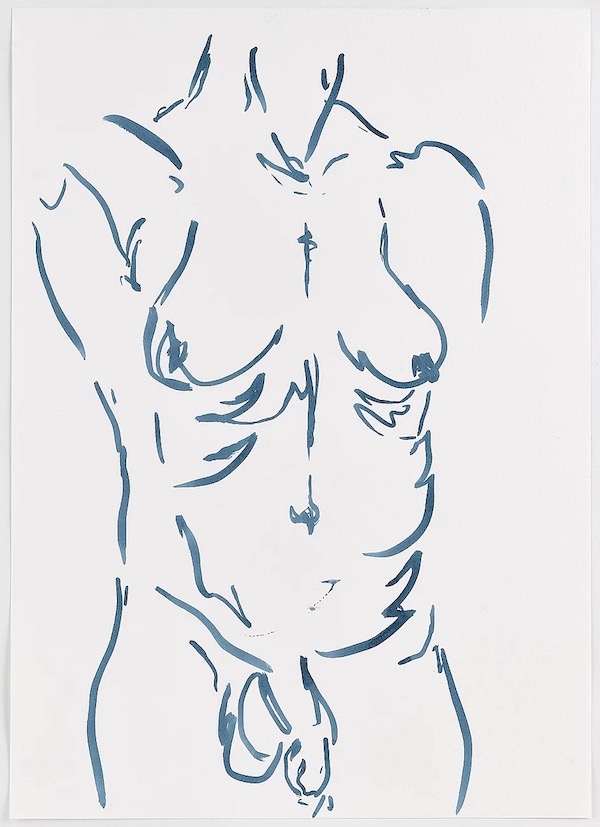 The Collapse of History I by Henry Hussey  ARTIQ

Z’ev Faith is a Camden born and raised interdisciplinary queer, transgender Jewish disabled neuro-diverse artist and activist. Emerging into the London art scene, after achieving a BFA in Studio Arts from Concordia University in Montreal, Canada. Z’ev’s art falls under a genre he defines as “Manic-Expressionism” which conveys queer identity and gender performativity: ‘The purpose of my art is to reveal to the world my raw emotions and fears through a cathartic healing process while critiquing social injustice as a form of political resistance and grassroots activism. My art is a mix between emotional exhibitionism, gender performativity and masochistic performance, and intends to make the viewer feel a sense of discomfort while evoking empathy’. The artist specialises in conceptual performance and intermedia/cyber arts but also works with traditional fine arts media such as drawing, painting, and photography.

Helen Beards’ art practice includes various media such as paint, collage and needlepoint as well as sculpture and installation. Her work explores themes set within a broader context of relationships and sex. Recent large colour field oil paintings of closely cropped sexual images are drawn from pornographic material and subverted into colourful joyous works. They take back ownership of sexual imagery from the predominately male gaze of the photographic or video image, and portray sex in a technicolour palette of stylized shapes.

Ricardo Peris is a Spanish illustration artist, studying visual communication at the Royal Danish Academy of Fine Arts. Ricardo describes himself as ‘a creative, positive person, especially motivated by wine, the infinite possibilities of the illustration field and anxiety’.

We begin our top picks with the vibrant photographic works of Alia Romagnoli. With Indian and Italian heritage, Alia’s practice focuses on female strength, nature and spirituality. These elements all become part of her subjects, often inspired by Indian culture and rituals: ‘I never saw art and images that showed the beauty and acceptance of queer people in any shape or form, especially due to the censorship in the media growing up in India. Many of my inspirations come from old Bollywood films and stills from the 1970s and 80s, as well as maharani portraiture in Indian folk paintings’. 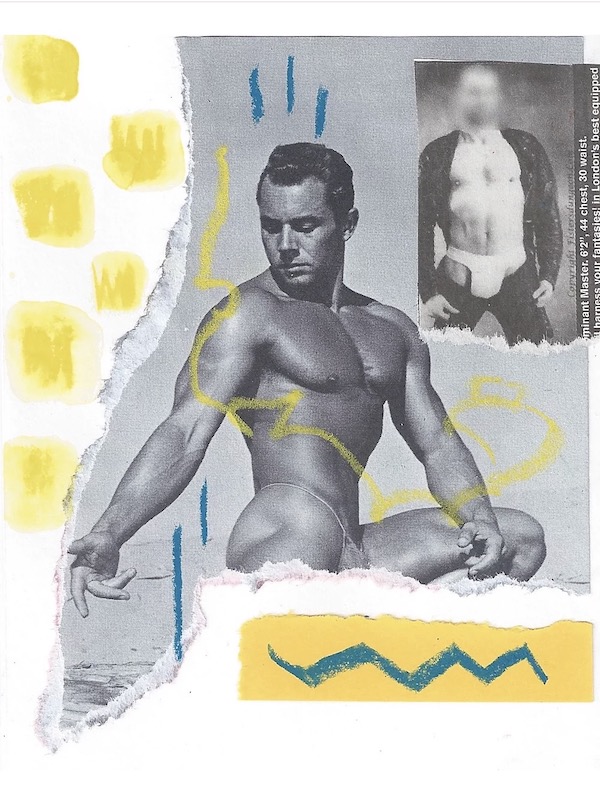 It’s fascinating to observe how artworks created in different mediums and techniques can be combined in the same art collection, and how their curation can expand meaning and references. In the collages by emerging artist Will Ballantyne-Reed, for example, we also find a warm and playful colour palette, while the subject and inspiration of his work are taken from queer archival materials and explore themes around memory, mythology, and queer survival.

Queer Frontiers has historically featured artists from all over the world, bringing together artworks inspired by a variety of cultures, experiences and backgrounds. The watercolours by French artist Delphine Lebourgeois revolve around ideas such as the power of crowds and feminism reinterpreted through the lens of fairy tales, myths and revisited historical paintings. Through these imaginary scenarios, also reminiscent of her childhood games, the artist tells stories about vulnerability and disillusion, rebellion and empowerment.

Often, contemporary paintings take inspiration from an eclectic variety of references, historical periods and genres. If attentively observed, the candy like, artificial colours and contemporary look of Chris Hawkes’ paintings reveal the artists’ inspiration taken from Baroque imagery with its characters’ demure mannerisms, sensuality and soft colour palettes. Nodding to the 17th century artistic tradition, Chris’ works also incorporate ultra-contemporary elements such as emojis, humour and even references to the experience of human relations during social distancing.

Conversely Maser’s recent series of works Taxonomy is inspired by the artist’s interest in botanical drawings. His passion for botany and plants initially evolved as a way to alleviate anxiety and regulate sleep patterns. Their influences soon became visible in his paintings, in which they are fused together with Maser’s energetic and graphic brushstrokes referencing his notorious activity as a street artist. Irish born and internationally renowned, Maser is most famous for his colourful large-scale murals and immersive public art installations. He’s as well-known for the support he has provided to several social causes throughout his career, most notably the 2016 Repeal the 8th campaign in Ireland.

Print making as a medium has always been present throughout each Queer Frontiers exhibition. This technique allows for image manipulation and superposition while facilitating the expression of layered narratives. One of the artists who intensively researches and experiments with printmaking as his primary form of expression is Radek Husak. Radek’s body of work features pigment transfers with carbon-drawn elements and often utilises the alternative photographic technique of the cyanotype. His pieces are influenced by the timeless tradition of the nude combined with surrealism and pop culture from the 1950s and 1960s.

Other popular art forms among our Queer Frontiers artists are performance and photography, two practices strongly linked to one another. Allowing the artist to build unique worlds and new meanings, these forms of expression often see the artist as the main character or protagonist, offering a platform to reinterpret personal experiences and perceptions through a broader spectrum of references. Konstantin Zhukov’s series In the Bathhouse portrays the artist and other characters within contemporary settings and is inspired by the literary work by classical Arabic poet Abu Nuwas (756-814), describing the joyous atmosphere of the bathhouse. Originally from Latvia, Konstantin is a London based artist and designer. 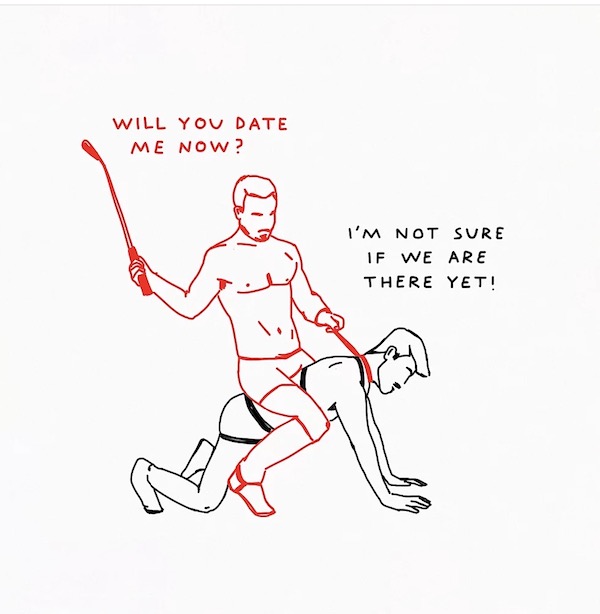 I’m Not Sure We Are There Yet by Ricardo Peris

Queer culture typically questions gender stereotypes and celebrates human diversity in the way we love and express ourselves. It often refuses assimilation and strives to reflect a person’s true self on the outside; visual arts such as fashion and dance provide the tools to achieve this freedom and contribute to create a culture which is joyful and inclusive. In his digital collages, Paris based German artist Enrico Nagel, deconstructs the stereotypical symbols of masculinity by fusing them with references to elements that are often categorised as feminine, such as ballet dancing, flowers and camp fashion.

Brazilian artist Juli Manara also creates collaged artworks but rather than using pre-existing imagery to design new compositions, she builds entire settings from scratch. Juli sews intricate costumes for models impersonating the microscopic characters that inhabit her works and she builds entire theatrical backdrops in her studio. These artificial elements are often combined with imagery of existing landscapes or flora to create surreal environments and fictional stories. The heart-shaped rainbow in Rainbow Cloud (Pride 2020) reminds us that love has no gender.

Founded by Patrick McCrae in 2009, ARTIQ takes an innovative approach to the art world, providing a combination of consultancy, rental and art-related experiences, for clients globally, all underpinned by the core principle of paying artists fairly. Each year they run a charity exhibition, Queer Frontiers, to raise awareness of international queer artists and allies and to raise money for various causes affecting the LGBTQ+ community and young people.