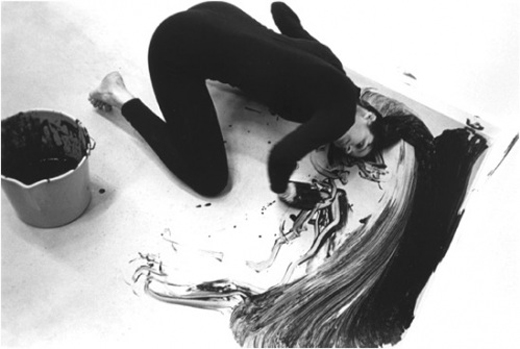 ‘Artists I Steal From’ at Thaddaeus Ropac to 9 Aug

Janine Antoni: from ‘Loving Care’ (1996 performance of 1972 work), 35 minutes using Loving Care black hair dye to – in artist/curator Alvaro Barrington’s words ‘elaborate a radical claiming of space’. That’s one of the approaches he confesses to purloining in the 49 strong show of his influences. 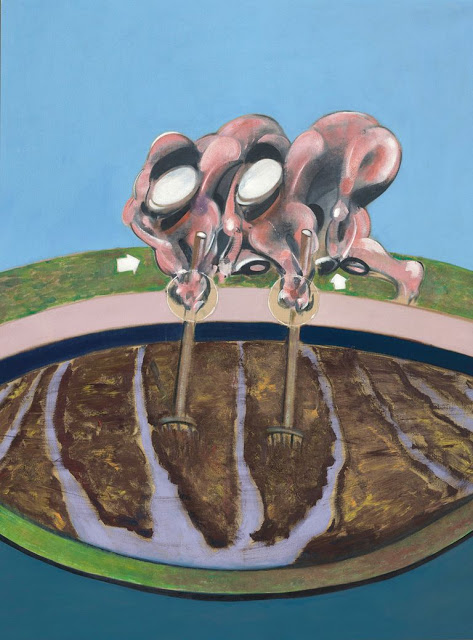 ‘That’, I wanted to say of ‘Two men working in a field’ 1971, ‘is no way to wield a fork’. And yet this would-be-agricultural wrestle-dance is weirdly compelling. The same, unsurprisingly, can be said for the other 13 Bacon paintings in ‘Coupling’ 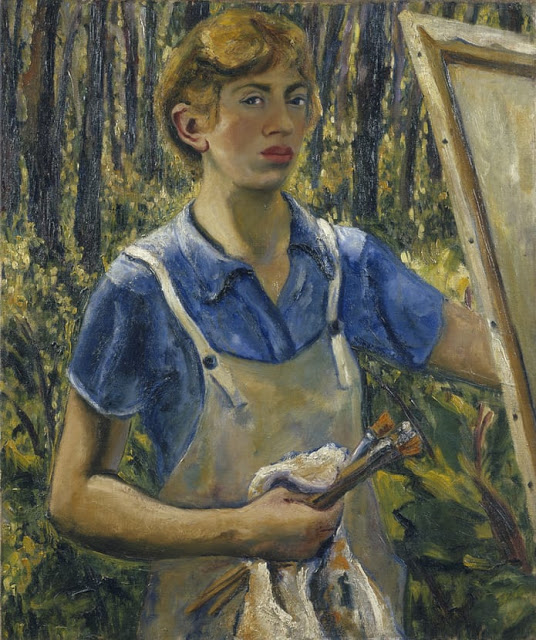 Lee Krasner at the Barbican to 1 Sept

Lee Krasner: ‘Self Portrait’ 1928. The mature works of Lee Krasner, now fairly fully emerged from her previous mis-categorisation as Mrs Pollock, need to be encountered at scale, but this result of the 19 year old Lena (as she then was) nailing a mirror to a tree has personality at any size.

Mel Bochner’s ‘Ass Backwards’ is the only mirror written part of this move towards more horizontal and less wordy formats as he revists phrases in ever-more-painterly oil on velvet in his new show ‘Exasperations’. The well-chosen complement, downstairs, is Marilyn Minter’s film ‘My Cuntry ‘Tis of Thee’ 2018 – of women writing ‘cunt’ in various guises onto the condensation on glass. 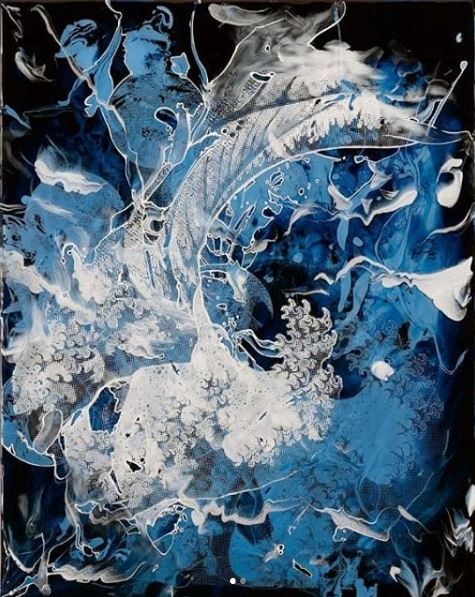 Playing off one of Shakespeare’s typically shameless uses of cliché, Anne Marie James does indeed transform the sea from a Hokusai and the sea-feeding clouds from a Durer into contrasted yet chiming forms of layered deluge. 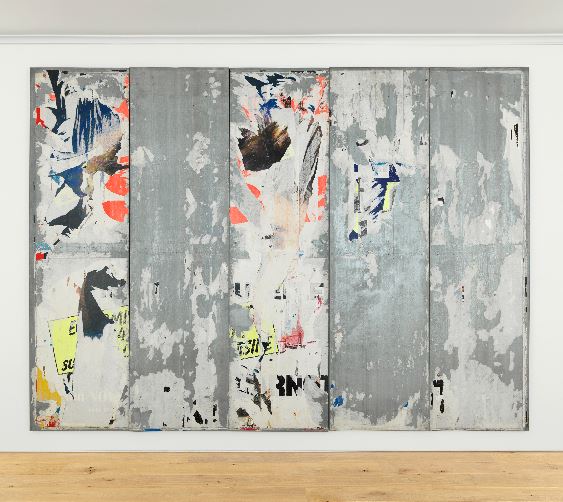 Untitled No 5D (Dauphin series)’ 1990 is from a show which may be the first to suggest the full range of Hains to London audiences. It isn’t an appropriation merely of torn posters, but – by negotiation – of the original galvanised steel backing as well, its title derived from the French company that manufactured such Ab-Ex sized 300 x 400cm billboards. Hains never removed any paper himself – deferring to the ‘collective consciousness’ of the public’s ripping, here rather extensive. But he did sometimes shuffle the elements… 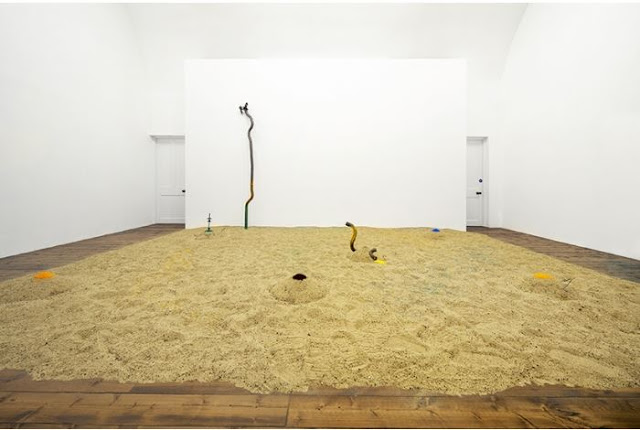 ‘Sandmining’, 2018 is from a show covering 50 years of Nengudi’s shape-shifting production, which ranges far more widely than her well-known works with nylon tights: eg plastic bags filled with water, photo sequences from performances, an installation made from collected and overpainted newspaper, and this recent Zen garden styled installation of sand, pigment and exhaust pipe plants. 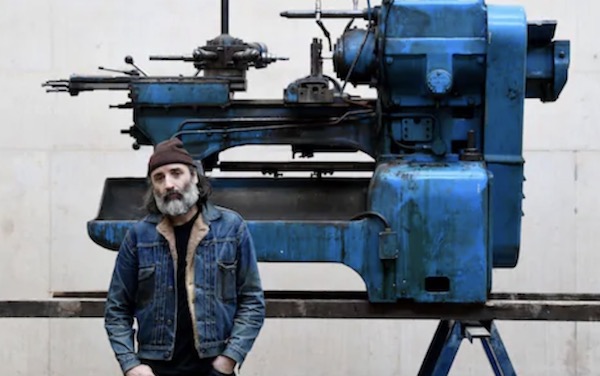 Mike Nelson: The Asset Strippers at Tate Britain to 6 Oct

‘The Asset Strippers’ 2019 fills the Duveen Halls with online auction sourced industrial, agricultural and bureaucratic detritus from our analogue past, repurposing it as sculpture and memorial while echoing many modern art tropes. The best use of this space since Phyllida Barlow in 2014… 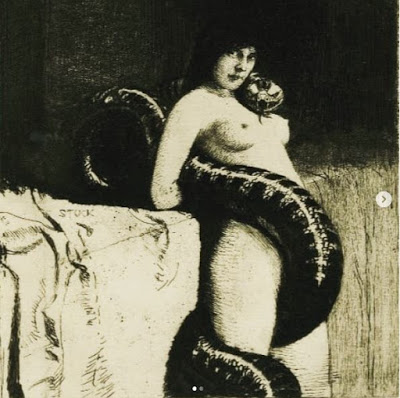 Various shows at the British Museum

It’s easy to see that Tate Modern (Bonnard + Tanning + West) has three interesting shows, but the British Museum can claim similarly. Franz Stuck’s ‘Die Sinnlichkeit (Sensuality)’ 1889-91 sees a snake entangled with Eve, part of a display of Symbolist prints, and one of the movement’s defining images of women as darkly enticing femme fatales. Add the surveys of Munch and Rembrandt and The World Exists To Be Put On A Postcard – artists’ postcards from 1960 to now and you have a feast quite apart from ‘the usual stuff’… 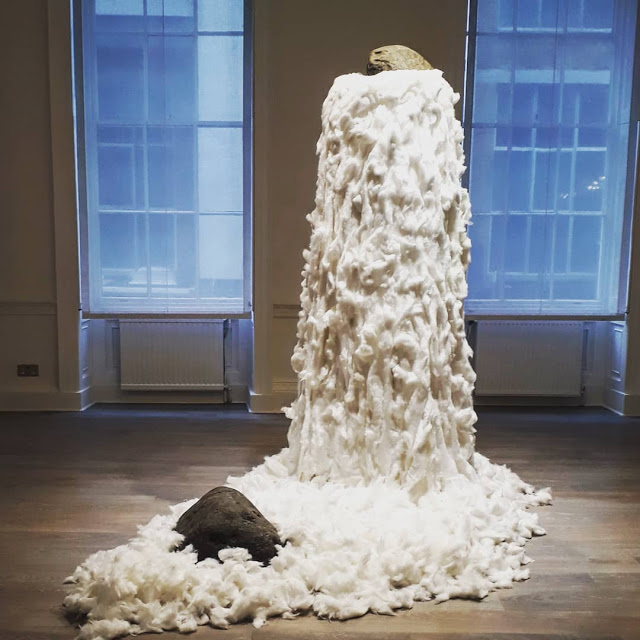 Tribute to Mona-Ha at Cardi Gallery to July 26

This encounter between cotton and stone is one of 18 installation-scaled works across four Mayfair floors which make up the most impressive Mono-ha (Japanese ‘School of Things’) show London has seen. It’s typical of Lee Ufan in showing the unaltered material properties of things, and resisting any hierarchy between them: Koji Enokura, Noriyuki Haraguchi, Susumu Koshimizu, Katsuhiko Narita, Nobuo Sekine, Kishio Suga, Jiro Takamatsu, Noboru Takayama and Katsuro Yoshida are also represented by work produced between 1968 and 1986.