For the 2023 edition of Platform, art historian and author Ruth Millington presents 20 artists who collaborate with inspiring individuals, reframing the muse as an empowered and active agent in the story of art.

“For me a ‘muse’ is a starting point, the source of inspiration”, says Iranian artist Golnaz Afraz. She paints symbolic portraits of women from her home country, sharing their protests against censorship. She’s among 20 artists exhibiting in this year’s edition of Platform, ‘Reframing the Muse’, which invites viewers to consider the instrumental role played by diverse, real-life individuals, past and present, beyond the frame in which they are immortalised. 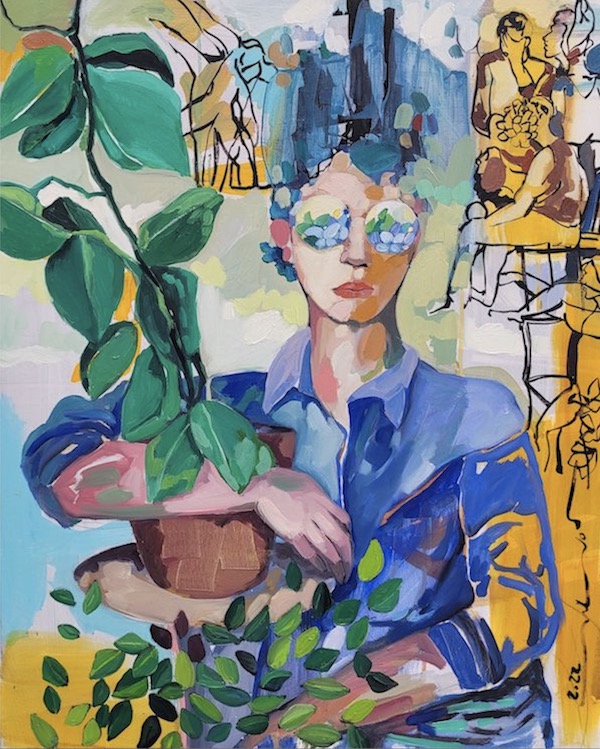 Today, our perception of the muse is that of a powerless female model, at the mercy of an influential and older male artist. But this trope, perpetuated by popular culture and the media, is a romanticised myth. Far from posing silently, muses have brought emotional support, intellectual energy, career-changing creativity and practical help to artists, and they continue to do so.

Art history’s most enduring subject, the muse has its origins in Ancient Greece: on Mount Olympos there were 9 goddesses, whom artists had to invoke for literary, artistic and musical inspiration. Richard Twose summons this divine power in ‘The Three Graces’, for which the Wordsworth sisters Flora and Imy, and their mother Bun, dressed up in party-wear. As he shares:

“I wanted to capture their very close, fun and above all loving relationship. But I also wanted to show something more, something very special and deeply personal, that existed perfectly well without me, that I was allowed in to glimpse”.

Similarly, Steve des Landes portrays strong female protagonists in enchanting, fairy tale-like narratives. ‘Red Shoes’ was inspired by his mother: “she wanted to be an actress and I remember her putting on makeup at the dressing table, symbolic of a woman’s need to make herself up to play a role. The red shoes hint at times past, the reality after the dancing stops.”

Motherhood is a central theme in Platform, with an emphasis on the female gaze. Nikoleta Sekulovic is an artist-mother who has depicted a close circle of friends, all parents, who “chose to collaborate” with her. Subverting the tradition of Odalisque portraiture, she has replaced eroticised female figures of fantasy with “women who have inspirations, ambitions and an inner drive.” Having shed their youthful inhibitions, these women “were models that posed with pride and no pretence. They could be majestic.” 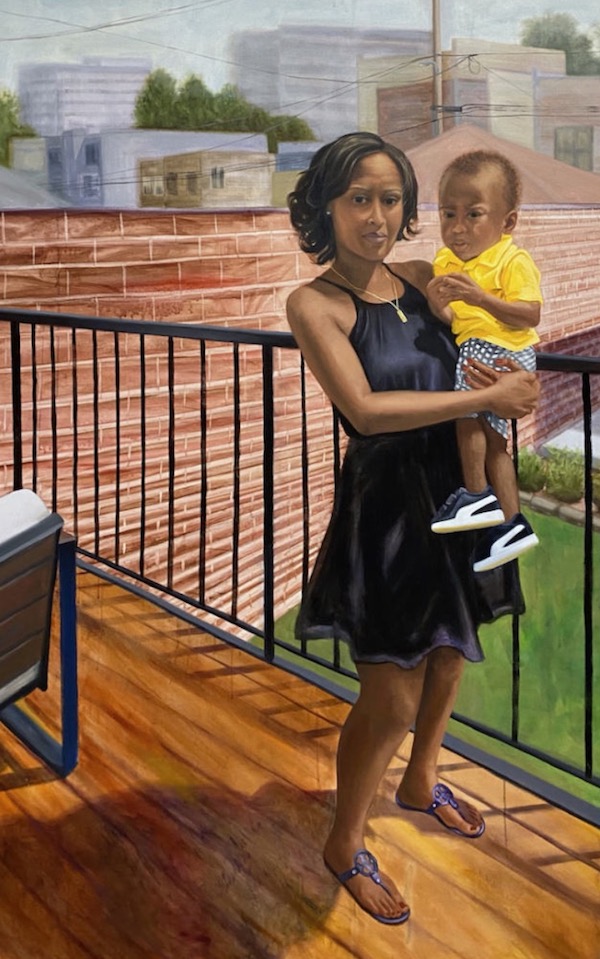 Ashley January’s own traumatic pregnancy and the survival of her prematurely-born son informs her unfiltered paintings of Black mothers and children. Centring their experiences, with motifs structured around the rituals of care, she addresses the Black maternal mortality crisis in America, where Black women are three to four times more likely to die from pregnancy-related complications than white women.

The personal and political intertwine in many of the artworks on show. Katya Granova works from family archive photographs as a means of “connecting” with her family history and a different era”. There’s a hauntingly nostalgic atmosphere to paintings such as ‘Grandma reading her speech’, in which the artist addresses conflicting political positions within the family. “Painting her past gives access to those complex feelings”, the artist explains. 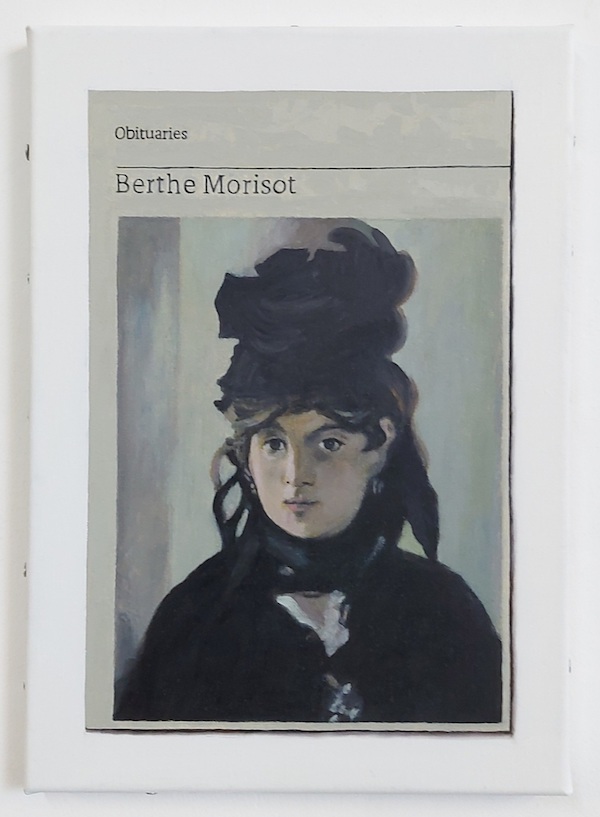 Many muses carry messages, by the nature of their very representation. In his ongoing ‘Obituaries’ series, Hugh Mendes complicates the romanticised binary of artist or muse, instead presenting the artist as inspiring muse. “It occurred to me that pretty much all the great artists of history have made self-portraits and so there was nothing to stop me going back through art history and making homages to all my heroes and mentors”, he explains. Moreover, his series highlights the fact that many great women artists have also been muses, and are perceived through this lens. Frida Kahlo, Berthe Morisot, Paula Rego and Eva Hesse are among his subjects. 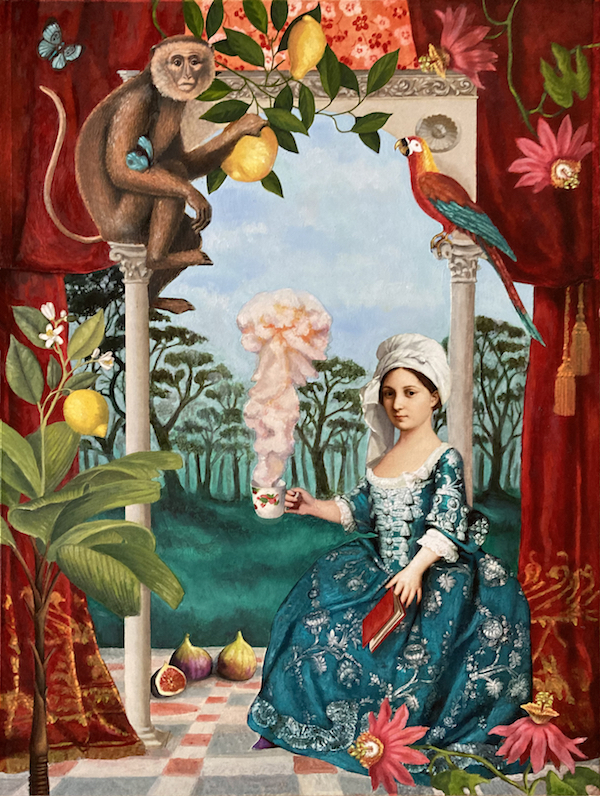 Golnaz Afraz, on the other hand, portrays contemporary female muses, all young Iranian women protesters. Through symbolic layers of colour, faces hidden by fruit and leaves, and arresting hair-cutting imagery, Afraz confronts the fact that her subjects are “constantly obliged to censor themselves, especially in Iran”, while amplifying their cries against the oppressive regime.

Men, too, appear as muses. Francesca Currie’s most significant subject is actor and model, Lewis, whom she has worked with since the start of her career. She says that they “have grown a connection as muse and artist” and loves that this has naturally developed over time.  Often riffing on famous masterpieces from art history, she replaces the reclining female figure with Lewis. “At our most recent sitting, one where I aimed to paint him as ‘The Rokeby Venus’, the sitting was magical. Something happened in that room beyond the sitter and painter…That day it felt like we were dancing”.

Other male muses include the curator, ex-partner and former studio manager of David Hockney, Gregory Evans, who appears with his instantly recognisable Renaissance-curled hair in ‘Reclining Figure’. When asked in interview who the love of his life was, Hockney responded, ‘Maybe Gregory’. Opie, on the other hand, has taken himself as his own nude muse with the playful sculpture ‘Julian Nude Arms Crossed’.

The statement of self-portraiture is one that women artists have made throughout the centuries, using their image as a rebellious means of asserting their identity. Isabelle van Zeijl, takes up this mantle today through striking photographic self-portraits. Having experienced first-hand sex-based prejudice and violence, van Zeijl redefines feminine power through her lens, acting as survivor, artist and subject in ‘I LOVE HER I’.

Audiences, too, are invited to participate as they pose before the interactive mirror, ‘No Photos Please’ by Eve de Haan ( Top Photo). “This piece is all about my conflicting relationship with social media. The real question is how can an app make you feel like you need to share private moments with the whole world, and to what avail?” the artist asks. As the “No” flickers on and off, this clever work of art requires reflection, in both senses of the term, from the collaborative viewer, proving that artists still need their muse.

Ruth Millington is an art historian, critic and author of Muse (Penguin, 2022). After studying art history during an MA at the University of Oxford, Ruth Millington spent five years working for museums and galleries across the UK, including the Ashmolean Museum of Art and Archaeology, the Estorick Collection and renowned modern art dealership Connaught Brown. She is an art expert on radio and TV, including BBC Breakfast, Woman’s Hour, ITV News, Radio 4′ and Sky Arts. Ruth has had writing featured across national newspapers and magazines, including the Telegraph, the i, The Sunday Times, Daily Mail, Express, Dazed and Elephant Art. As a lecturer, she has spoken at Oxford Literary Festival, Dulwich Picture Gallery and Sotheby’s Institute of Art, where she is Director of Careers. You can find her writing about art on her award-winning blog www.ruthmillington.com.