The Turner Prize nominated artist Simon Patterson, an original participant in Damien Hirst’s Freeze exhibition and closely associated with the YBA movement in the UK is the subject of a major exhibition at the Serlachius Museum Gustaf in Finland.

Patterson uses maps, diagrams, lists, and instruction manuals, which help us manage and structure an increasingly complex world. His exhibition Head to Toe opened to the public at Serlachius Museum Gustaf from 6 February 2021. 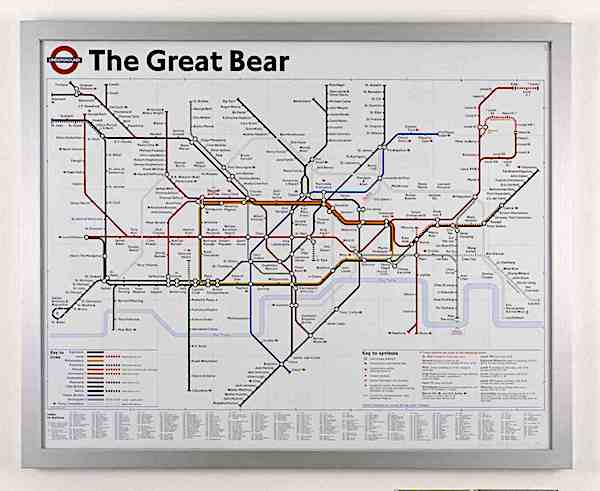 Simon Patterson’s (b. 1967) art eludes simple definitions. The curator of the exhibition, Timo Valjakka, classifies Patterson as a conceptual pop artist. In his insightful and often humorous works, he directs us to reflect on what we know about the world we live in and what our knowledge is based on.

The essential elements of Patterson’s works are often entirely familiar. The surprising combination of them, however, shows the world in a new light. Examples of this are wall drawings of football team systems, in which Jesus is the goalkeeper and the players are named after the Apostles.

Names play a central role in Patterson’s art. He collects lists of the names of film stars, presidents, scientists, even astronauts. Sometimes he places them into some completely unexpected element: a map, diagram or instruction manual.

For Patterson himself, each of the name works is a kind of historical painting: “I am interested in, for example, the Apollo 11 astronauts as a historical triptych. Even though we may not necessarily remember anyone’s face or only recall a foggy black-and-white snippet of the landing, when Neil Armstrong descends the ladder of the lunar module, the name paintings represent role models,” says Patterson.

Patterson uses a wide range of materials and techniques. He looks for the technique that best suits each work. Flying and travelling are recurring themes in his works, as are stunts and magic tricks. Appearing as someone else fascinates him greatly as a kind of illusion. He also admits that he uses the first man in space Yuri Gagarin, marine explorer Jacques-Yves Cousteau or magician Harry Houdini as his alter egos.

The Museum Gustaf’s exhibition includes a series of photographs of his performative works Manned Flight and Landskip, which have been shown in exhibitions worldwide. These series of works will also receive a continuation next summer in events related to the Serlachius Museums’ exhibition.

Simon Patterson lives and works in London. He graduated from Goldsmiths College School of Art in London in 1989 and held his first solo exhibition the same year in Glasgow, Scotland. Patterson’s works has been exhibited in numerous museums and galleries in Europe, Japan and the United States. In 2014, he participated in the Serlachius Museums’ Pavilion opening exhibition, SuperPop!

The exhibition Head to Toe is in Serlachius Museum Gustaf from 6 February 2020 to 9 January 2022.