The New Jerusalem, the visionary city, imagined in the Book of Revelation as the eternal environment for redeemed humanity, provided the initial inspiration for the current exhibition of four technology-based art installations by artist-in-residence, Michael Takeo Magruder, staged in the British Library’s Entrance Hall gallery.

Magruder’s prizewinning A New Jerusalem is an immersive virtual reality installation which was produced in 2014 as part of De/coding the Apocalypse – a solo exhibition exploring contemporary creative visions inspired by and based on the Book of Revelation. This imagined cityscape was constructed using Google Maps data of present-day Jerusalem combined with the text of Revelation translated into data code and rendered in four-dimensional virtual space. It was this process and experience that proved inspirational for the works in Imaginary Cities. 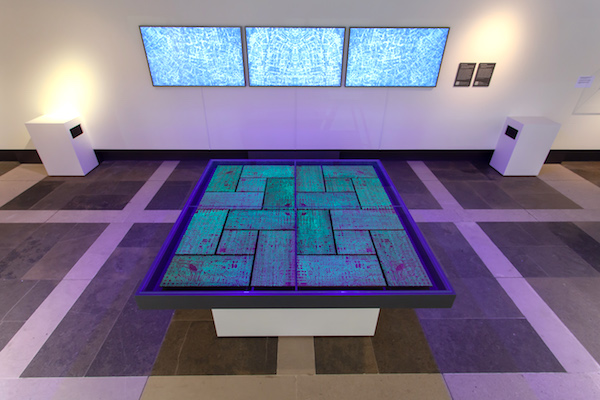 The exhibition has been in development since 2016 when Magruder became artist-in-residence at the British Library, researching digital map archives and the One Million Images from Scanned Books collection. The installations are a creative response to four 19th-century maps of London, Paris, New York and Chicago found in that collection and can be seen in the exhibition alongside the original source maps from printed books contained within the British Library’s archives.

The installations combine digital technologies with traditional fine art processes. The first is a set of four gilded monoprints based on a map of Paris. The use of gold gilding shining through the dark ink of the street design creates an intense beauty which sacralises the patterns of the street plan. The second is a virtual reality cityscape based on a map of New York City with the cityscape newly generated each day to reflect visitor data – page views, interactions and volunteer image tagging – of the historical map on Flickr Commons. The third installation is a triptych of ever-changing landscapes generated by applying algorithms to a source map of London. The final installation is a physical 3-D sculpture created using historical woodworking techniques applied to a map of Chicago.

Magruder translates his source material – which are precious entities in their own right – into either digitally immersive or physically tangible artefacts that re-present their source in alternative forms. These enthrall and convince in and of themselves, while also enhancing our appreciation for the source itself. To do so requires the paying of attention both to the source map and to the properties of the form in which the re-presentation occurs. The creation of these installations is, therefore, a labour of love.

Blending the historical and the contemporary, the informative and the aesthetic, this has been a project which has considered how large digital repositories of historic cultural materials can be used to create new born-digital artworks and real-time experiences in ways which are relevant and exciting to 21st-century audiences. By exploring the British Library’s digital collection of historic urban maps to create provocative fictional cityscapes for the Information Age these artworks not only draw from and feed into the British Library’s digital scholarship and curatorial programmes, but more significantly, engender new ways for members of the general public to discover and access the Library’s important digital collections and research initiatives.