The Royal Academy of Arts is currently hosting a major exhibition of the work of the internationally celebrated South African artist and Honorary Royal Academician, William Kentridge (b. 1955). Working closely with the artist and his studio, this ambitious and immersive exhibition has been specifically curated for the Royal Academy and will encompass the broad repertoire of Kentridge’s forty-year career. It will bring together important works spanning from the 1980s through to the present day, including charcoal drawings, animated films, a mechanical theatre, sculptures, tapestries and performance pieces. William Kentridge will be the most significant exhibition of the artist’s work in the UK to date and promises to reveal an artist at the height of his creative powers.

William Kentridge is known for his distinctive drawings, animated films, performances, and large- scale productions. While at times his work is semi-autobiographical, he also uses history to highlight the inequities, barbarity, and absurdities of the modern world. A particular area of focus is the European colonisation of and the ongoing post-colonial legacy across the African continent. The issues of racial inequality combined with social, political, and economic injustices are not only powerful reminders of how deep scars remain but also act as potent reminders of the substantial progress that still needs to be made. In this regard, memory represents a critical component of Kentridge’s work. For many years Kentridge has also worked closely with a group of creative collaborators including composers, dancers, stage designers, puppeteers, weavers, printmakers, and metalsmiths. This broad range of partners reflects the fundamentally inclusive and collaborative nature of his work.

A selection of Kentridge’s early, rarely-seen drawings from the 1980s and 1990s will be presented, including three triptychs displayed together for the first time and the most significant work from the period, The Conservationist’s Ball, 1985 (Rupert Museum, Stellenbosch). Around 25 large charcoal drawings, made for the creative process of the eleven animated Drawings for Projection, will also be shown. An extensive selection of drawings from the entire series will be displayed together with five of the eleven animated charcoal-drawing films made between 1989 – 2020.
Several further important films, performances and installations will feature in the exhibition. A key installation will be Black Box / Chambre Noire, 2005 (Louisiana Museum of Modern Art, Humlebaek), a mechanical theatre piece including puppets and projections, which interrogates the harrowing story of the massacre of the Herero people in Namibia, now considered the first genocide of the twentieth century. 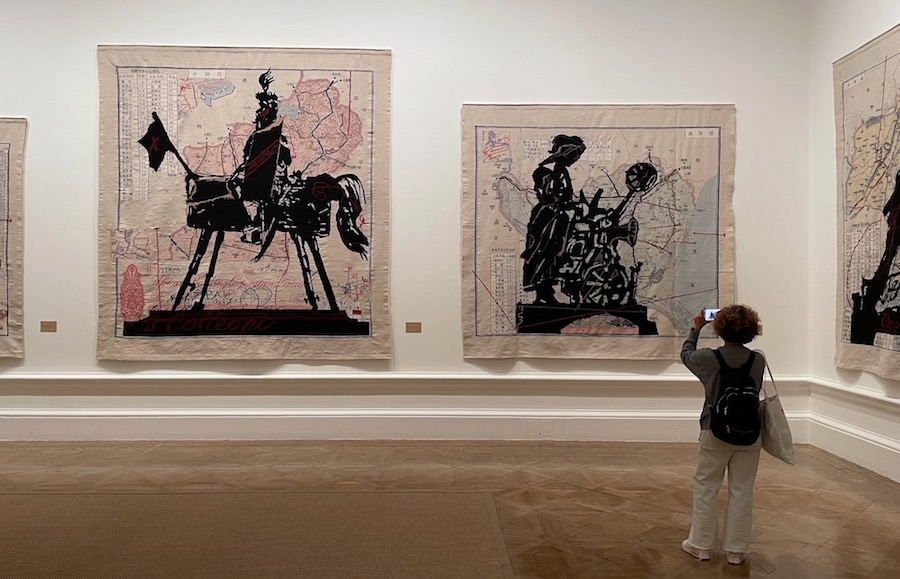 Ubu Tells the Truth, 1997, is a sharply critical animated film referencing the play Ubu Roi (1986) by French symbolist writer Alfred Jarry, which reveals the brutality of the apartheid system in South Africa. Alongside the film, Kentridge will create a large site-specific wall drawing to complement the film. Notes Towards a Model Opera, 2015, is a three-screen projection which reflects on modern Chinese history and Chairman Mao’s Cultural Revolution. Two of Kentridge’s films will have their first UK presentations in the exhibition; the short, animated film, De como não fui ministro d’estado, 2012 and Sibyl, 2019. The latter is a reinterpretation of the Greek myth of the Cumaean Sibyl who prophesises the future of individuals by writing them on oak leaves; but these are blown around by the wind, creating complete confusion for those who come to discover their fate. This work will be shown in an immersive setting with performance stage props in the space.

Amongst the most recent works, made in 2021 – 2022, will be a sequence of large-scale tapestries, created especially for the Royal Academy galleries and made in the Stephens Tapestry Studio in Diepsloot, Johannesburg. There will also be a group of large flower drawings, as well as a selection of Kentridge’s distinctive tree drawings. Many of these include rubrics, recalling a tradition that dates back to medieval manuscripts to emphasise certain words within a text. Conjunctions of words are gathered by Kentridge and used in his drawings in an apparently random manner, setting up juxtapositions which simultaneously hover on the edge of meaning and elude analysis.

William Kentridge will follow in the RA’s tradition of celebrating its Royal Academicians, continuing a strand of programming that has showcased some of the most important living artists including Anish Kapoor, Ai Weiwei, Antony Gormley, and the forthcoming exhibition of Marina Abramović.

William Kentridge Hon RA (born Johannesburg, South Africa, 1955) is among the most prominent contemporary artists today. He works in and across mediums of drawing, writing, film, performance, music, theatre and collaborative practices, to create works of art that are grounded in politics, science, literature and history, whilst maintaining a space for contradiction and uncertainty.

Kentridge’s work has been seen in museums, galleries and theatres around the world since the 1990s, including the Museum of Modern Art in New York, the Albertina Museum in Vienna, Musée du Louvre in Paris, Louisiana Museum in Copenhagen, the Reina Sofia Museum in Madrid, and the Kunstmuseum in Basel. His work can be found in the collections of art museums and institutions across the globe. Opera productions include Mozart’s The Magic Flute, Shostakovich’s The Nose, and Alban Berg’s operas Lulu and Wozzeck, and have been seen at opera houses including the Metropolitan Opera in New York, La Scala in Milan, English National Opera in London, Opera de Lyon, Amsterdam Opera, the Sydney Opera House and the Salzburg Festival.

In 2016 Kentridge founded the Centre for the Less Good Idea in Johannesburg: a space for responsive thinking and making through experimental, collaborative and cross-disciplinary arts
practices. The Centre hosts an ongoing programme of workshops, public performances and mentorship activities. He is the recipient of honorary doctorates from several universities including Yale and the University of London. Prizes include the Kyoto Prize (2010), the Princesa de Asturias Award (2017) and the Praemium Imperiale Prize (2019). In 2015 he was elected as an Honorary Royal Academician of the Royal Academy of Arts.