The artist’s studio is a timeless, complex space. A place where artists go to work, to think, providing both inspiration and comfort, as well as an actual physical place to go to create and experiment.

This vast exhibition, laid out over a dozen rooms of varying sizes, examines the different facets of the ever-fascinating artist’s studio. Captured by the artists themselves and by others seeking to represent the particular magic of the artist’s studio, a vast array of work is on display here and not to miss for anyone who has an interest in the creative process.

The artist’s own territory, where everything is fair game. 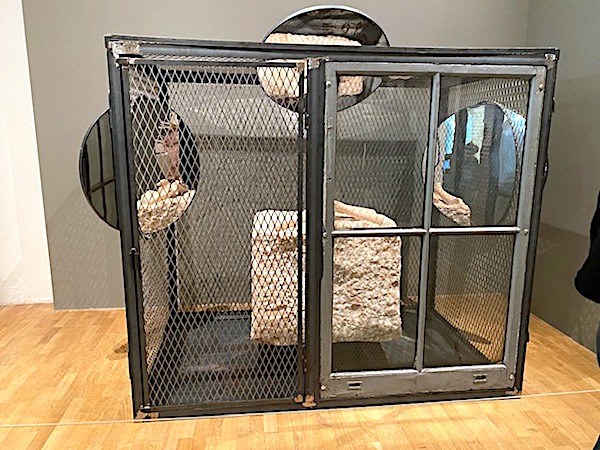 Kicking off the exhibition, as it were, is Louise Bourgeois with Cell IX, which somehow feels fitting to introduce the idea of the studio space and creation. In a large caged sculpture, two hands gently cup another hand on a solitary rock as three overhanging mirrors reflect them. Reminiscent of Michelangelo’s Creation of Adam, this sculpture evokes the act of creation and reminds us of the collaboration that occurs in the studio, but also the self-reflection and exposure that occurs within this space. Other initial standout pieces in the room were two simple blue paintings by Lisa Brice. Helen especially encapsulates the feeling of the studio space. A female figure leans against a crucifix-like easel looking out through blue slitted eyes. One feels put on the spot gazing at this painting, almost trapped by her keen gaze, reminding us that we are in her space and that she is there to watch us and lay us bare. The choice of tracing paper as support for the blue oil and pastel adds to this effect. We feel as though we are both an intrusion and object of suspicious interest, like a predator in whose cage we have become trapped.

Continuing along, the reflection shifts to understanding the performative aspect of the studio space. After all, one cannot disassociate the meaning of being an artist from all the expectations that that word entails. In photographs of familiar faces such as Lucian Freud, Francis Bacon, and Jackson Pollock, we see the performance of artistry and how the studio is a vital part of artistic identity. Lucian Freud Landing on Studio Floor by Bruce Bernard reminds us of this performative side when the artist is captured in his playground, especially when there are outside observers such as photographers. Gleaning insight into the artist at work in a natural manner perhaps cannot be achieved by any intruder. However, the portrait by Denise Colomb of Alberto Giacometti in His Studio, shot from a vantage point behind him as he sketches his subject, comes close. 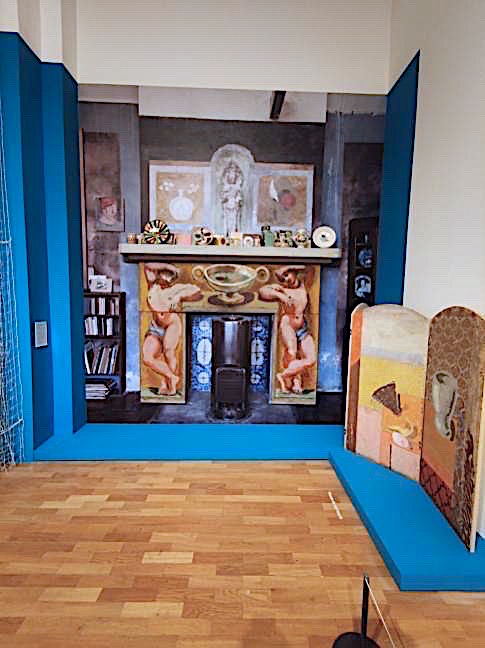 This playful, performative facet of what being an artist inhabiting a workspace is, is perhaps best evoked in a large triptych photograph by Rodney Graham, The Gifted Amateur, Nov 10th, 1962. Graham poses in a perfectly decked out retro bungalow, pouring paint onto a canvas in his pyjamas. This brightly coloured work toys with the idea of what makes art, art, and the realization that perhaps anyone can be an artist if they can look the part, like the man in the photograph.

The exhibition continues on a second floor, with a focus on the studio as its own entity. As I reached the landing and entered the first room, I was immediately struck by what I thought was a Lucian Freud painting that I hadn’t seen before. Upon closer examination, I realised that it was actually a large scale photograph of rags on Freud’s studio floor, titled The Remnants (Freud) by Darren Almond. I found it fascinating how a pile of seemingly innocuous objects could somehow hold the essence of Freud’s paintings, almost as if they had absorbed something of him simply by being in the studio space. The studio here becomes its own living breathing thing, secretly absorbing what is poured into and onto it by the artist. After all, this is not surprising for a room that holds so many secrets. This secretive side of the studio is not to be neglected and is best demonstrated through the arresting portraits by Auerbach, Freud and Bacon on the same floor. These subjects are often in exposed unclothed poses, made comfortable by the intimate aura created in the studio space.

Although a safe space in many ways, the studio can also become a trap for the artist. One Year Performance, 1980-1 by Tehching Hsieh evokes the suffocating element of the studio. He examines through a series of videos where he punches the same time clock on the hour, every day for a year, the notion of the entrapment of the studio space, at odds with the studio being a space of creative expression. The studio is a living, breathing entity, a thing with which the artist has a sometimes fraught relationship as he becomes entangled in his own inability to create.

As the exhibition gently comes to a close, we arrive at my favourite room of the exhibition. The title of the room is “Eating the Studio.” This room perfectly captures the irony of the studio being revered as a mystical, sacred space by those unused to working in one. Fundamentally, for each artist, the studio is a work/live space, accumulating human mess as it goes, which can then itself reveal new ideas for artwork. The relationship an artist has with this space is complex, but fundamentally it is the artist’s own territory, where everything is fair game. The painting Yolk by Helen Frankenthaler captures this playfulness in the bright colours and choice of everyday subject in the egg yolk, which we imagine might be spilt over somewhere in her studio space. Thus creating a trail of lived-in mess. In this space, she and every artist spend so much time in, as it simultaneously serves as inspiration for her art.