The new Abstract Expressionism show that just opened in the main galleries of the Royal Academy at Burlington House, is an absolutely splendid affair. If you can only see one exhibition during a day out in London, see this one, and leave Tate Modern on the other side of the Thames to its own populist devices. The range and quality of the loans are astonishing. 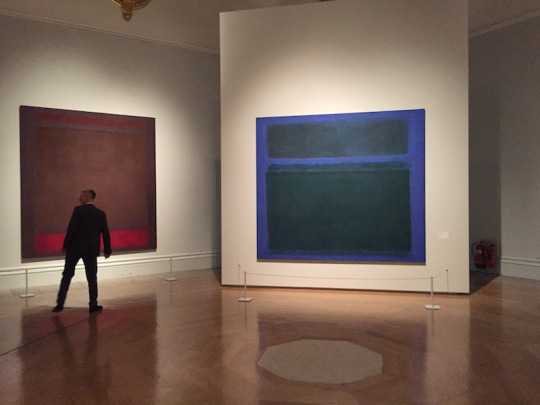 It establishes without a doubt, if any effort to accomplish this is still needed, that that Abstract Expressionist movement in America was a game-changer. It completely altered the cultural landscape. Up till its appearance, the Modern Movement in art had been comfortably Euro-centric. This, despite the various catastrophes of the first half of the 20th century – World War I, the Russian Revolution (catastrophic in that it led to the suppression of a flourishing avant-garde in Russia), the rise of the Nazi regime in Germany, the Spanish Civil War, and the immense disruption of World War II. The only challenge to the artistic hegemony of Europe during the years before 1945 came, not from the United States, which, despite the occasional presence of certain leading European avant-gardists in New York – Marcel Duchamp being a case in point – was regarded by most European intellectuals as being culturally on the margin, but from Latin America, notably from Mexico and, to a somewhat lesser extent from South American nations such as Brazil and Argentina. In these Latin American contexts, new art responded to situations that were specifically non-European, in particular to the fascination of Pre-Columbian cultures, and to the revolutionary political impulses that were the legacy of Bolivar and other ‘liberators’ of the early 19th century. In Latin America, art spoke, from the beginning of is engagement with the Modern Movement in the 1920s, with a political voice. More effectively than it ever did in Russia, where experimental art was soon enough suppressed, or the practitioners chose exile elsewhere. 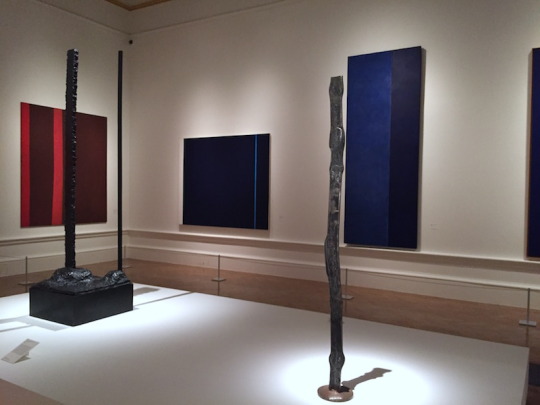 The show at the R.A. is exhilarating, in the sense that it gives one of a nation and a culture suddenly finding a voice and speaking out – very often in works that are extremely ambitious in scale. The ‘wow’ factor in the R.A. show comes not only from the sheer size of many of the works but from their swaggering self-confidence: the fact that, in each case, one seems to meet with an individual speaking, unfettered, from the depths of his or her own psyche. What else can one do, but stand back, take a good look, and say ‘Bravo!’? It’s only a little later certain doubts, not necessarily catastrophic, begin to creep in. At a time when there is a big push to give more recognition to women artists, the show does its best to include them in. There’s a whopping four-panel work by Joan Mitchell, Salut Tom, but it’s dated very late in the story of Abstract Expressionism – 1979, a long time after the birth of Pop Art. There are several works by Lee Krasner, Pollock’s wife. The biggest – again very big – is called The Eye is the First Circle, and looks just like the work of her more famous hubby. The date is 1960. Pollock’s own amazing trajectory was cut short by a car crash in 1956. There’s one work by Ukranian-born Janet Sobel (1894-1968), who had a brief mid-life career, overshadowed by both Pollock and Krasner, that didn’t start till she was 43. She is thought by some to have made drip paintings before Pollock did. 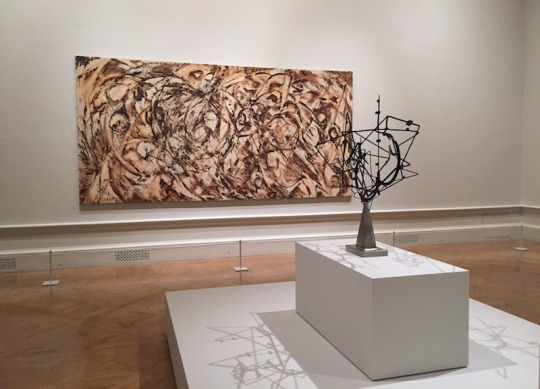 The really interesting thing, if you look at the part of the catalogue text that deals with the early dealers in and collectors of Abstract Expressionist art, is the huge influence of women in this sphere of activity. Peggy Guggenheim and Betty Parsons played a major role in keeping Pollock and other major Abstract Expressionist artists afloat financially, and many of the pioneering buyers of this radically new kind of art were female collectors. Not just Guggenheim herself, who was a major patron, in addition to being a dealer. Buy that macho guy’s balls, take them home and hang them on your wall.

There is also a small photography section in the show. It is made up, in turn, of very small images, seemingly inspired by a desire to make things that look a little bit like Abstract Expressionist paintings by editing what the photographer saw in the external world. The most interesting of this handful of photos, all of them in black and white, is directly documentary, not a simulacrum of art made in a different medium. Made by Hans Namuth, it shows Pollock as a blur of energy, painting a picture, using a canvas laid on the floor. Big-size photography doesn’t seem to have made a place for itself in contemporary art until artist-photographers were inspired to go big by commercial images on billboards. The really big silence – something mentioned only very peripherally in the catalogue – is the part that Abstract Expressionism played in the Cold War. Progressive critics in America were by instinct partisans of the Modern Movement whose centre had, up till then, been placed geographically in Paris. They initially expected that this situation would continue as before, once the conflict ended. In America itself, meanwhile, there were forces at work, connected with what we now call McCarthyism, who were determined to ensure that the USA would not become the home of a new visual arts avant-garde.

A close associate of McCarthy, Congressman George A. Dondero, summed it up in an interview he gave to Emily Genauer, then critic for the New York World-Telegram:

“Modern art is Communistic because it is distorted and ugly because it does not glorify our beautiful country, our cheerful and smiling people, and our material progress. Art which does not glorify our beautiful country in plain simple terms that everyone can understand breeds dissatisfaction. It is therefore opposed to out government, and those who create and promote it are our enemies.”

In fact, there were, on the contrary, influential people in America who saw the shift in artistic ideas and values that were taking place in American art as a potentially valuable weapon in the struggle against the Soviet Union and its ambitions in post-war Europe. This no matter what Senator McCarthy and his allies in Congress thought about it. The full extent of their support emerged only recently. It was channeled through the Congress for Cultural Freedom, set up with CIA funding in 1950. The visual arts became a favorite child of the Congress for Cultural Freedom and its savvy and cultivated CIA backers. The Congress organised a number of major touring shows. The one with the most impact was The New American Painting, which visited every big European city in 1958-9.

The CIA had some very particular and special museum connections. Nelson Rockefeller, President of the Museum of Modern Art in New York, was a major backer of the new art movement – because he thought of Abstract Expressionism as being, as he said, “free enterprise painting”. William Paley, founding father of the CIA, was on the members’ board of the Museum’s International Programme. In 1949, Tom Braden, who had been the first chief of the CIA’s International Organisations Division, was executive secretary of MoMA. Connections as strong as these were bound to prevail in the end.

Added to this, the American popular press had become increasingly interested in a kind of art that seemed to be performed as much as it was painted. This linked easily to the new mass-market celebrity culture that slightly later found a different embodiment in Andy Warhol’s Marilyns and Jackies. Pollock can even, in this context, be seen as the great granddad of the Kardashians.

A turning point was the visit paid to Jackson Pollock by a freelance photographer called Arnold Newman, employed for the job by Life magazine. Pollock was then living at Springs, a remote village on Long Island. Newman spent a day with the artist, who willingly posed for pictures, both in and around Springs and in the barn he used as the studio. In the studio, he put a sheet of canvas on the floor and began to create a painting, “giving a performance,” as one description has it, “as the rough, rugged all-American genius of his ambitions.”

As a result, a two-and-a-half-page spread appeared in Life in August 1949, headed with the provocative question “Is this the greatest painter in the United States?” ‘Jack the Dripper’, as Time magazine, Life’s sister periodical, dubbed Pollock at around this time, here combined two apparently antithetic roles, that of a shaman, and that of all-American ‘good ole boy’. To the great convenience of his supporters, the one thing he didn’t go in for was social or political commentary.

Abstract Expressionism, particularly in the form in which Pollock practiced it, represented not only the triumph of American art but also the final phase of a kind of solipsism inherited from the Romantic Movement of the late 18th and early 19th century. The artist was present in the artwork as the hero of a drama that revolved entirely around himself, just as the narrative in Byron’s Childe Harold revolves entirely about the personality of the poet. Nothing counted but the stormy movements on his own individual sensibility represented directly in paint.

In this sense the movement can be regarded as a dead end – it was art that made no comments about society, which was exactly the reason that the CIA found it so useful. Comments about society have returned full force in the contemporary art we have now. Abstraction Expressionism’s statement, in complete contrast to this, was that the individual was supreme. The CIA glossed this, by implying that here was visible proof that America was the only society is which individuality could be expressed absolutely uncensored, in its fullest, most liberated form. The exhibition at the Royal Academy still delivers this message full force. It’s up to you whether you believe it or not, concerning America now, in the era of trumpery Trump.