Anish Kapoor is a magician, says Lord Cholmondeley in his introduction to this exhibition. His ancestral seat, Houghton Hall is presenting the largest ever exhibition of outdoor sculptures by Kapoor, including stone pieces he has been making for 25 years but never shown in the UK. Quite a coup for Cholmondeley who it seems has pulled off some magic of his own.

Overall the exhibition features 21 sculptures as well as a selection of working drawings from Kapoor’s ground-breaking practice that has spanned the past 40 years. This series of works challenges the classical architecture of the house and the idyllic beauty of the grounds while being in continuous dialogue and engagement with Houghton’s history.

Apart from the stone sculptures which are the main focus here, there is a simply stunning “Sky Mirror” from 2018 on the long West lawn in front of the house which is described as “bringing the heavens literally down to earth” by Mario Codognato, the curator. For once, it is not hyperbole. Norfolk is famous for its “big skies”, and the day I was there, the clouds were reflected in the concave mirror so beautifully you felt you were being pulled into a portal to another world. I’ve seen so many of his sky mirrors, but the setting in these glorious English gardens is spectacular.

Charles Bridgman who designed the gardens in the 18th century was a proponent of the garden as idealized views of nature, every hedge, every tree, every plant, every pond is carefully planned to look as ‘natural’ as possible. Bridgman and Kapoor are an ideal combination, as both are skilled at controlling and re-presenting nature. As Codognato says, the contrast and the dialogue “between natural and artificial, between chance and order, are the leitmotiv in the architecture of the grandest country houses and gardens in the early 18th century, and a key question in Kapoor’s work”. 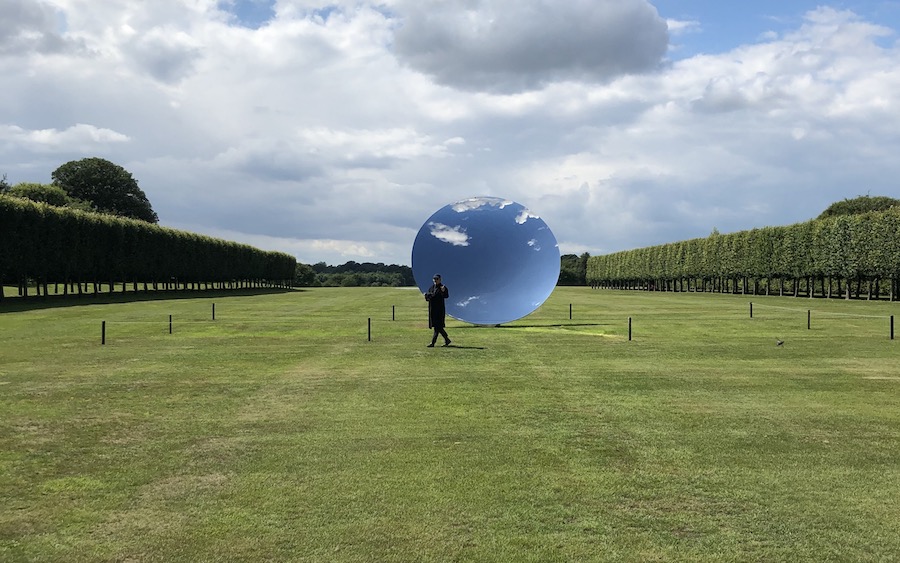 The underlying aesthetic ideas for the garden design of the period drew on philosophy, literature, painting and sculpture. Gardens were seen, as ‘educational’ and no English country-house garden would be complete without the well-placed historical or mythical statues, usually semi-naked. Mankind was re-presented not only by taming nature itself but also by the representation of human form within it. By placing Kapoor’s work in this setting, Houghton Hall is continuing an age-old tradition. As in 18th-century garden sculpture, Kapoor’s sculptures also reflect his interest in the human form, but the difference is that Kapoor is interested in the interior of it rather than the exterior.

Gardens are designed so that you are steered around them, and every view you ‘happen’ to come across in the garden was meticulously designed to be seen that way by Bridgman. Seeing Kapoor’s work at the end of a long corridor of immaculately trimmed box hedges was thrilling. Turning a corner and catching sight of one of his marble pieces was as delightful for me as I’m sure it was for those Georgians seeing Aphrodite lurking in the bush.
There are the usual Kapoor concerns with voids and emptiness, but the overriding impression for me with these sculptures is their human scale and inexplicable sensuality. The androgynous shapes echo the human body; curvaceous and fleshy, their orifices and cavities interact with the natural vein of the marble.

They have (particularly when highly polished) a fetishistic quality about them, which is particularly evident in the lip-like “Mollis” the liver-like (!) “Liver” and “Grace” which just reminded me of a uvula! It’s hard not to play “guess the body part” with these works! These pieces are carved from a marble so flesh-like you can’t help but touch it to see if it gives. They are disappointedly cold to the touch.

The works here were done on-site at the actual quarries the marble came from, and the blocks were left as found, just the interior is worked on. As with any sculpture, the artist must choose his marble carefully. The wrong vein, the slightest fault, can ruin a piece. Within the marble itself are the folds, pock-marks and even tiny fossils, which give the sculptures a rich, rough texture.

The stone sculptures that worked best for me were the ones in the gardens. I loved the un-fleshy “Untitled” (2018), a huge four-ton block of Marble, raw on one side and extremely highly polished on the other, looked spectacular within the settings of formal hedges, reflected (along with us) in its surface.

When it comes to the inevitable rainy day, we can find some of Kapoor’s works in the Stone Hall. These halls were designed to bridge the outdoor and indoor spaces of these homes. A preoccupation of Kapoor’s. This room was designed by William Kent – Britain’s first interior designer. We are so used to seeing Kapoor’s work in minimalist spaces, and it is refreshing to see them in Kent’s ‘maximalist’ aesthetic.

In the same way, Kapoor’s work changes how we perceive the garden; he also makes us re-examine the interior architecture. This time he has replaced the ancient roman busts that Kent placed there, by a series of eight concave mirrors of various colours on marble plinths normally reserved for historical busts. The Georgians loved a convex mirror, a must-have accessory in the 18th century. They were highly functional too and were used for their light magnifying qualities in dimly lit areas. Kapoor’s concave “mirrors of infinity” in the Stone hall, serve the opposite purpose and absorbs the light into the void. The reflections and shots of vivid colour into an otherwise monochrome room are wonderfully jarring.

This is a fantastic show and has all the elements I love: An English garden, a Palladian house and conceptual art – a perfect combination.