I can’t see an Anish Kapoor exhibition at the moment. I can’t talk about Anish Kapoor at the moment. Not without the first thing on my mind being that infamous black paint copyright purchase. It paints him as a devil, Mammon. A capitalist artist. A rich artist. An artist in league with those evil corporations eager to own our genetic makeup, patent our DNA and reduce us to our monetary value, We are living in a shadow cast by the blackest black that ever was. By his capitalist gesture.

The grand scale of objects in this exhibition does nothing to dispel the knee-jerk reaction to think about excess money. The pink onyx egg shapes carved into an oblong coffin are of the size I associate with Egyptian sarcophaguses as a child. When I grew up, I was disappointed, although only initially, with how diminished they now appeared. However, these pieces are the right size of oversize objects to pack a punch. Monumental and pink. It’s a bold choice of colour, salmon pink stone. But that’s Kapoor, a bold choice of colour combined with the correct shape for emotional and liminal resonance.

There are more sculptures that stand stolid and solid, showing off their rockiness. ‘Rectangle within a rectangle’, 2018 which is a statement in and of granite. But the pink onyx, that’s an unusual choice. I keep coming back to stare at its bath-soap texture. This is a piece I love. It reminds me of a salmon-pink marble worktop that my boyfriend got out of a job he did on a multimillionaire’s house in Hampstead. I marvelled at that marble.

Kapoor is, like Arte Povera artists, keen to reveal and exploit materials for qualities they already possess. However, this is not so much old sheep wool as in work by Janis Kounellis. These materials are rich, like the purple banned to non-royals by Queen Elizabeth I. Tyrian purple was expensive to produce. Nine thousand molluscs were needed to create just one gram. This is the kind of material I associate with Kapoor, although purple is not his colour, not yet. I’m not the first one to use the phrase Arte Ricci as a counterpoint to Arte Povera, but the phrase keeps coming to mind as I walk around these expressive, material-aware sculptures.

Another Kapoor statements in granite here are formed of a dark polished variety that reminds me of kitchen worktops including that veneer that fails so dismally to evoke the authentic igneous rock. I’m starting to think this is deliberate if unconscious, how Kapoor’s theatricality is leading me to believe about the haves and have-nots. Perhaps it’s another talent he has, this side-effect of his work. Doesn’t matter that it’s not intentional. Critics lost that naive belief in authorial intent a long time ago, so maybe he should be praised for this commentary on art and finance of our time. Alternatively, perhaps it does matter.

His graphic talent is clear, obvious, bright. He selects potent shapes. The silhouettes, the sheer colours, the precipices and the lakes of powder have made me marvel. The mountains and deserts, the rocks with no greenery. The world of red and black. He hasn’t lost his touch, his power to evoke through form. Red, not the beloved vermilion but a deeper blood red, shy of maroon, perhaps it could be called claret or crimson, it’s hard to pinpoint the colours of red, one shift warmer or cooler or darker and they’re so emotionally different, that dark red is dripping off the large, mostly untitled paintings, from top left to bottom middle, slashed with black and warm yellow. Kapoor’s dripping black, dripping red paintings suggest bloated and dripping sexual and reproductive organs. I note the horns of the moon and think of the moon’s representation as a male war god. A male witch, associated with the cycle of the moon, blood and war? The press release language reinforces this reading with the phrases ineffable dark voids’, ‘the most hidden fantasies of our origin and being’, ‘space we might intuit an as yet unknown known.’ 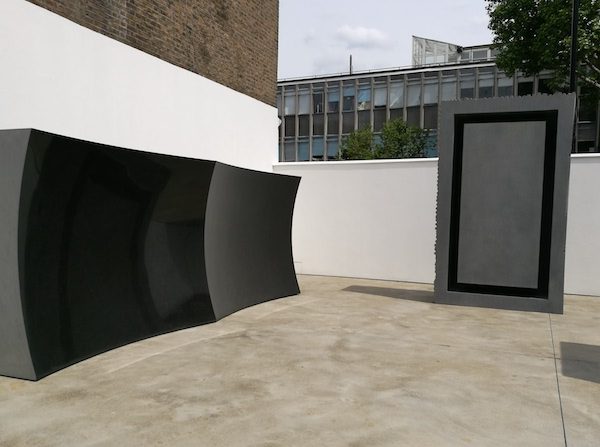 An unfortunate phrase that, ‘unknown known’. It brings to mind the infamous speech of United States Secretary of Defence, Donald Rumsfeld. Is Kapoor naïve? That speech became a joke, like a poor undergraduate essay (mine). We’re here in the moment when the battle is hotted up, and men, women, trans-people, politicians, religious followers, protestors and journalists, bloggers and facebookers are fighting over abortion rights.

The battle for the high moral ground wages on earth while imperialist nations have headed for the literal high ground of the moon. Since 1969 we have been able to imagine a human astronaut standing on the rock in the sky, symbol of our months, of our seasons, of tide, menstruation, the cycle of fertility, looking down at us giving birth, dying, having periods, as the seas shift below.

It is controversial that a man should present work about the womb. Apparently. However, it’s a trope we’ve been seeing. Damian Hirst’s giant uteruses at the entrance to Qatar hospital have been more gracefully received. Gavin Turk’s latest multi-artist project is not womb-centric, but the egg is only one step removed. Are all the Sensation generation of male artists are about to run down the corridor to the maternity ward shouting, ‘Wait for me! I can do this in my style. Let me show you! I can do motherhood! I can do woman! I can do childbirth!’?

I am confused by contemporary opinions on identity and authenticity in art. Humans are creatures of the mind, creating our constructs. We are actively combatting racism and sexism in art, rewriting language every day, aiming to empower the excluded, struggling for inclusion. Perhaps Kapoor should be able to do work on menstruation. He says in interview, why shouldn’t a man do work on reproduction? However, in doing so, he is appropriating the visual language of feminist resistance while taking advantage of his male privilege and his established artistic and social status, probably because it’s trendy.

It’s a shame that men actually can’t do childbirth, yet, though I live in hope. However, what they can do is a large-scale sculpture that evokes the art of ancient civilisation and the eternal mystery of procreation without the fear of being ridiculed for ‘talking about themselves’. I’m very aware of this as my recent article on Tracey Emin’s ‘A Fortnight of Tears’ generated intense criticism of her self-focused art, including her abortion. Kapoor’s large scale oil paintings of bloody black gushings recall Emin’s large scale acrylic paintings in that exhibition. When I put their work side by side, I think that Emin’s female experience of missed-motherhood informs her work and endows it with a primaeval power that draws me inside.

It’s not a competition of two artists, but the comparison helps me interrogate what I feel about these paintings and where they sit in contrast to other work on feminist art. Because I’m looking for something, I can’t see. Maybe there’s a reason I can’t see it. I stand right in front of Kapoor’s paintings of splashing bloody wombs and one penis, reminiscent in its profile of a sex education diagram. Also, I keep thinking; I can’t stop thinking about, I can’t get over the Vantablack.