The Antony Gormley solo exhibition at the Royal Academy of Arts opens on 21 September. It’s a solo show rather than a retrospective but covers work from the 1970s to the present day. The exhibition fills all thirteen rooms of the Royal Academy’s Main Galleries bringing together both existing and specially conceived new works. There is a room of sketchbooks and drawings, sculptures, some early works and what is referred to as ‘experiential environments’. It begins outside with a sculpture of a tiny, vulnerable baby made from iron (1999) lying on the floor of the Annenberg courtyard already playing with our senses of proportion and space.

The show is all about space. The way the viewer navigates the sculptures is central to the exhibition.

Gormley is known for his use of the human body, mainly the life-size casts of his own body formed by covering himself in wet plaster producing a case that is then cast in iron or fibreglass. These anatomically correct casts have famously been installed in unexpected environments such as on the beach in Crosby, Merseyside (1997), the top of buildings along London’s South Bank (2007) and in locations around Madison Square, New York City (2010). A similar series Lost Horizon (2008) dominates one of the exhibition’s central spaces with figures fixed to the ceiling, jutting out from the walls and placed around the floor. 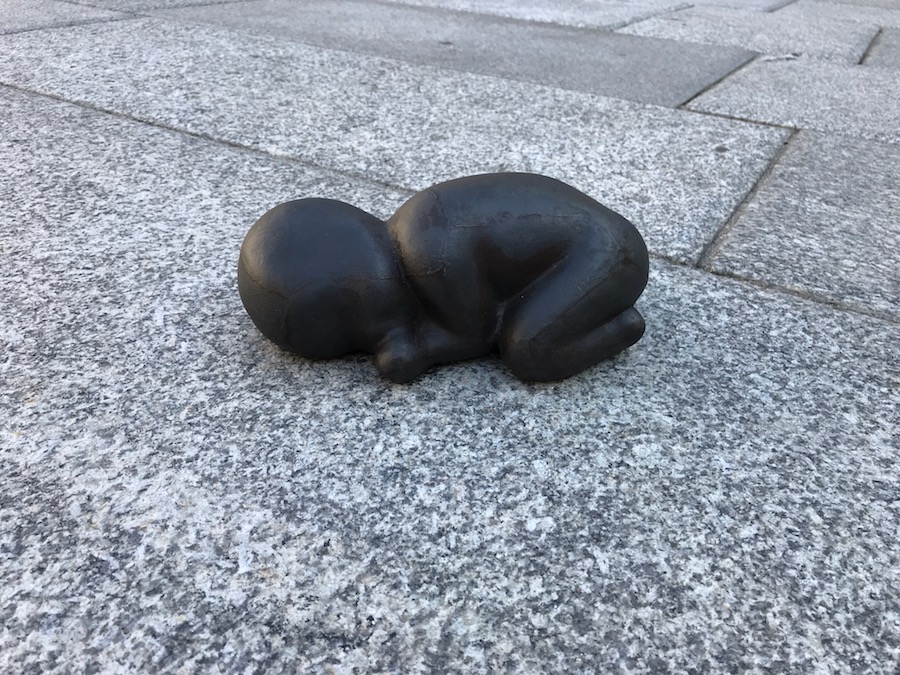 The show is all about space. Not cosmic space but physical space. The way the viewer navigates the sculptures is central to the exhibition. In Lost Horizon, the visitors merge with the floor-standing sculptures similarly with Slabworks (2019), the first room of the show, but here the sculptures are geometric, cubist forms that reveal themselves as human on a closer look.

A room of drawings and works on paper is interesting to see Gormley’s working process but little more. A room of early works exploring everyday items such as bowls, bread, trees references both Arte Provera and Richard Long. 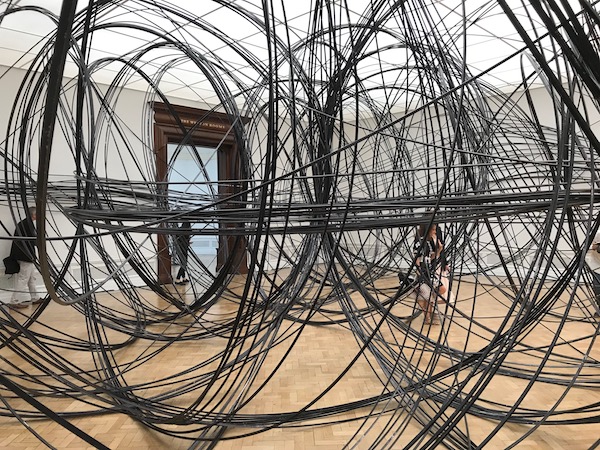 Clearing VII (2019) is a room filled with aluminium tubing that is coiled and was allowed to expand until restricted by the floor, walls and ceiling. The viewer can clamber through the coils, stepping over, dipping and ducking over the metal. Not accessible to all by any means but by standing in the doorway just looking up, around and through the metal the dynamism of the work shines through. However, it is only by navigating the sidewalls of the room that you can reach Gallery 4 and see the single life-size body form of Subject II (2019) made from tightly packed vertical and horizontal steel bars. Cave (2019), an architectural, hollow sculpture of a body in the foetal position that fills Room 11, has the same accessibility issues. Only the able-bodied and brave will venture inside the narrow, dark passages to experience the full intentions of the artist. Otherwise, the viewer walks around the outside marvelling at the technique while spotting glimpses of the room’s architectural features between the metal forms. I had no idea it was the shape of a body without reading the exhibition booklet. 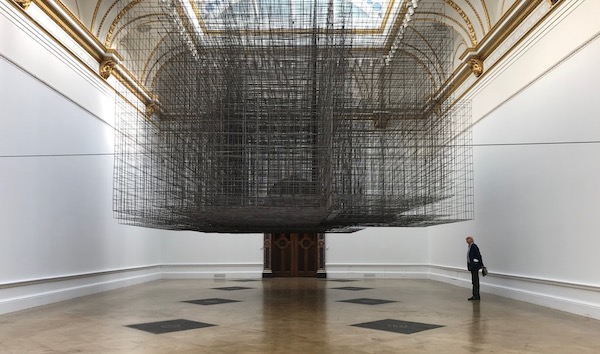 Matrix III (2019) is a suspended room-size cage made from 98% recycled industrial steel forming a vast cloud of steel mesh fills the largest room. It plays with our perception of space and is an engineering feat and should prove to be a crowd-pleaser but is too clinical and austere.

Another site-specific work is Host (2019) which is a room with a clay and seawater floor. The viewer stands at the doorway and sees the room’s architectural features reflected in the water while breathing in the smell. The emptiness of the space contrasts with all the other site-specific installations but falls short of the power of Richard Wilson’s 20:50 (1987), the oil-filled room which was recently on show at the Hayward Gallery.