There can be no doubt that Art-Exit: 1939, at the 12 Star Gallery in Europe House, Smith Square, is a highly political exhibition. Though it is subtitled ‘A Very Different Europe’ it is also about the way things are right now, and it is no accident that it is on show in this location – the London headquarters of the European Community that Britain is about to leave.

Those who came here stayed. There can be no doubt that they made an enormous difference to the art scene – ELS

Most of the artworks in Art Exit 1939 – not quite all – come from the collection of the Ben Uri Gallery, and most of this majority, in turn, are the work of Jewish artists forced to flee the Nazi Holocaust and take refuge in Britain. Almost invariably, those who came here stayed. There can be no doubt that they made an enormous difference to the art scene here in Britain, from the 1940s onwards. If, for example, one looks at Jonathan Jones’ recent book on British art, from Hogarth to the present, one finds that his real heroes, in British art from – say – the 1960s onwards, are, more often than not, Jewish. The great four, for him, are Bacon, Freud, Auerbach and Kossoff. Three of these are Jewish. Kossoff was born here of Jewish parents. Freud and Auerbach were immigrants from Germany. Auerbach arrived in Britain in 1939, on a last-minute Kindertransport. Both of his parents died in concentration camps. He, like Lucian Freud, is duly represented in the current show. 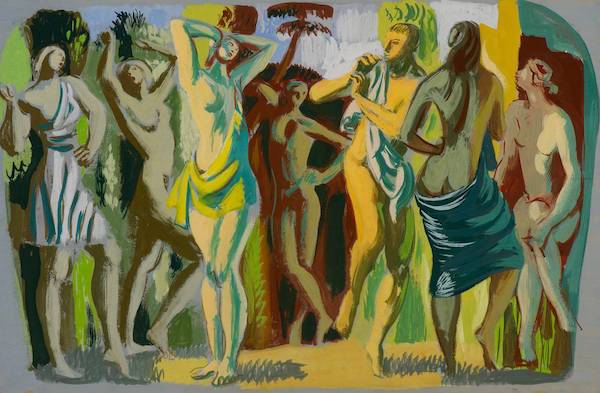 Not all of the artists represented, Jewish or otherwise, came from Germany. As the exhibition handout is at pains to note, the show features artists from “Austria, Czechoslovakia, France, Germany, Hungary, Poland, Romania and Russia.” There are several celebrated names, in addition to the two already mentioned: Marc Chagall, George Grosz, Oskar Kokoschka, Kurt Schwitters, Chaim Soutine. Tellingly, the grander the reputation of the artist, the less likely that he or she settled here permanently.

Nevertheless, what this great influx of mostly Jewish talent did was to give a particular direction to post-World War II British art – usually figurative, rather than being purely abstract, interested in social issues, even when these were being somewhat ignored in the United States, then claiming the international leadership, first with Abstract Expressionism, then with Pop. In particular, there was in Britain a current of figurative Expressionism, inherited from the German art of the 1920s. This has proven to be more durable in the British art being produced right now than some of the other stylistic experiments of the Modern Movement and Post-Modernism.

Not much of the work – in fact almost none – of the work included in the exhibition is directly about the Holocaust, the great catastrophe from which many of the artists included escaped so narrowly. An exception and one of the works that impressed me most is a portrait by an artist named Dora Holzhandler, unknown to me previously. It offers an imaginary likeness of the artist’s grandfather, who perished in Auschwitz, and whom she never in fact met. Painted in 1962, it shows the subject in concentration camp garb, with strutting German guards in the background.

By some ironic accident, Holzhandler’s name has been omitted from the long list of artists included in the show handed out to the press. This seems like an allegory of how easily we forget the details of significant historical events.

It also, in a way, serves as a warning. In the immediately pre-war period, Britain took people in, however tardily and reluctantly, and saved their lives, and with them their talent as artists, as a result. Now the political impulse here is to keep people out, even when we know that this may cost them their lives. The same impulse is manifesting itself even more powerfully in the United States.