The new show, ‘Age of Terror: Art since 9/11’ on the top floor of the London branch of the Imperial War Museum struggles to define the idea of ‘war’ in contemporary circumstances. The IWM was founded in 1917 – that is to say during World War I. Both the actual founders of the institution and the first generation of visitors had a pretty good idea, so they believed, of what ‘war’ actually was: large national forces coming into violent collision with one another, with perhaps catastrophic results for civilian populations that, in one way or another, also suffered from the massive episodes of violence that ensued.

‘Terror is not, in fact, an identifiable opponent, possessed of a solid material reality’ – ELS

Massive conflicts of this kind have filled history books from every age, from the Roman Empire onwards. Basically, during these conflicts, participants, whether willing or unwilling, supposedly knew how the idea of war was to be defined: who was nominally in charge, and which of the opposing sides they were supposed to be on. Before World War I, for example, there were there were the Napoleonic Wars, in which Britain played a leading role. The pattern persisted into the first half of the 20th century. World War I was in due course followed by World War II, which ended in 1945, nearly three-quarters of a century ago. These were violent situations in which one could speak of winners or losers. Essentially, these are what the IWM was founded to deal with. The institution announces: ‘Our website tells the stories of people’s experiences of modern war from World War I to conflicts today.’ It all depends, however, on how you define the word ‘war’. 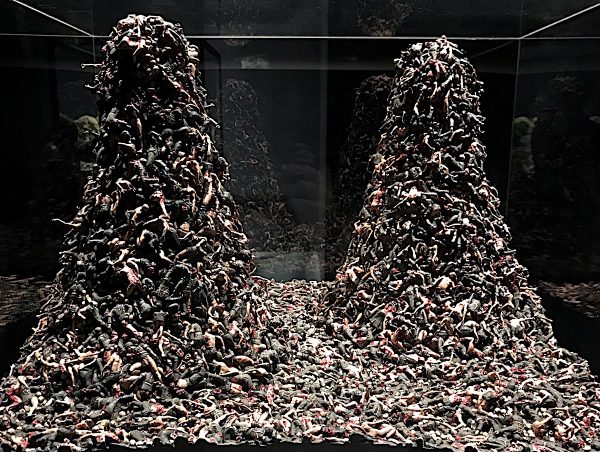 Now, in the 21st century, it has become commonplace to talk about the ‘War on Terror’. But Terror is not, in fact, an identifiable opponent, possessed of a solid material reality. It is not even a coherent group of people, wedded to an idea – people who can be killed, imprisoned or converted by an equally cohesive force, seeking to maintain an orderly society. One not without violence – no society entirely lacks that – but with violence kept at a tolerable level and coming, when it arrives, from immediately recognisable sources. Terror now manifests itself suddenly in different forms, then subsidises, only to re-appear, in patterns that seem, to those who meet and are broken by it, essentially random and irrational. This is the situation the exhibition at the IWM attempts to deal with. Not surprisingly, it does so with rather varying levels of success.

The exhibition begins, with some panache, in the main hall of the building, before you get to the third floor. There you find just the outline of a drone, marked out in white lines on the floor. This is the only reference to the surveillance society. Up on the third floor, you will find a replica, non-functional in white marble, of a surveillance camera – the work of Ai Weiwei. Other fashionable names are present: a large pot by Grayson Perry; two mounds in a glass case, covered with minuscule, wriggling figures in Nazi uniforms – the work of the Chapman Brothers. This latter work is entitled – wait for it! – ‘Nein! Eleven?’ 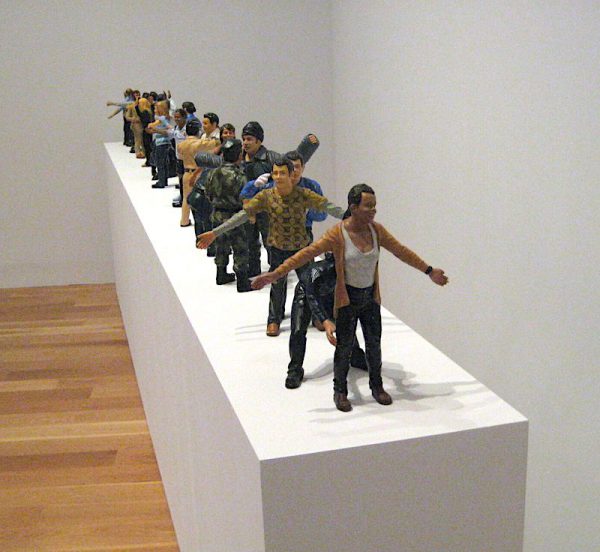 Other images seem more directly relevant: Jitish Kallat offers a parade of doll-sized figures, who turn out to be people being frisked at airport security.

In fact, it is the most directly documentary images that seem to work the best. A huge canvas with vertical black stripes – supposedly what the so-called ‘jumpers’ saw as they fell to their deaths from the Twin Towers – can’t compete with Tony Oursler’s film of the actual event and its aftermath.

The exhibition, in general, suffers from a lack of focus, which is linked to a lack of real imaginative reach. But at this point, a question arises: could you, the spectator here, actually have imagined the terrible events in which the exhibition roots itself, from simple journalistic accounts? The show covers some regions, Syria, Iraq and Afghanistan as well as what happened on that single day in New York. But what really sticks with one is the enormity of that crime, and at the same time its vacuousness, summed up by an installation by Ivan Navarro, which offers two square, brightly neon-lit holes in the floor. You look into them, and they seem to stretch down and down into infinity, just as the Twin Towers once seemed to stretch into the sky.

I looked at those, and thought, that – yes – despite its flaws, this exhibition actually has something to tell me. Rather more than the rather similar show entitled Everything at Once, now on view at that Vinyl Factory, which I recently reviewed here. What that lacks, despite its boastful title, is the genuine frisson of fear. Once doesn’t know exactly where that fear is coming from, but here it creeps up on one all the same.