Audrey Flack found her signature style during the 1960s. Originally an Abstract Expressionist, she moved through New Realism to Photorealism. Her inspiration, though, derives from hyper-baroque works, including those of Carlo Crivelli and Luisa Roldán. Crivelli, she discovered on a visit to the Metropolitan Museum of Art aged fourteen when she saw his Pietà and was ‘transported by its emotion, beauty, and technique.’

In 1981, her Arts Magazine article on Crivelli recognised his originality and impact on contemporary art. She called him a ‘Gothic, Baroque Super-Realist,’ ‘the one who breaks the rules, the eccentric, the maverick, which should be more carefully considered, and not cast aside, because he or she doesn’t fit into the mainstream of a movement.’ Those like Crivelli, she argued, ‘should not be punished for being unique – and yet this has been the case.’ She was thinking of the extent to which Crivelli has been written out of art history, with Giorgio Vasari in particular not writing about him.

Calling for a reassessment of his work and a wider overhaul of art history, Flack has two Crivelli-inspired paintings on display at Ikon Gallery Birmingham. At the same time, the Gallery presents the first exhibition in the UK dedicated to the work of Crivelli. Flack’s two images are Pollock’s Cans (2016), based on the Pietà (1476, Metropolitan Museum, New York), and a recent painting which combines a portrait of her husband with Madonna Della Candeletta (1488-1490, Pinacoteca di Brera, Milan).

In speaking about her Post-Pop Baroque work generally, she has said ‘it’s based on many engravers and woodcut artists who are completely unsung’ but which have an ‘intensity of feeling.’ In a 2021 podcast with Hrag Vartanian, she spoke of there being a need for other kinds of images, for images in the collective unconscious that bring you some sort of peace or healing in the other part of your brain’ and noted that ‘art can do that too.’ In the current moment, she thinks ‘there’s something that art can offer us through imagery and beauty and peace or something for what, for whoever responds to whatever is presented.’ It’s ‘a kind of tolerance’, ‘a slowing down from the hysteria that we’re in, it’s ‘slow art’, ‘internalising and keeping your eye on the fact that ‘we need healing.’ 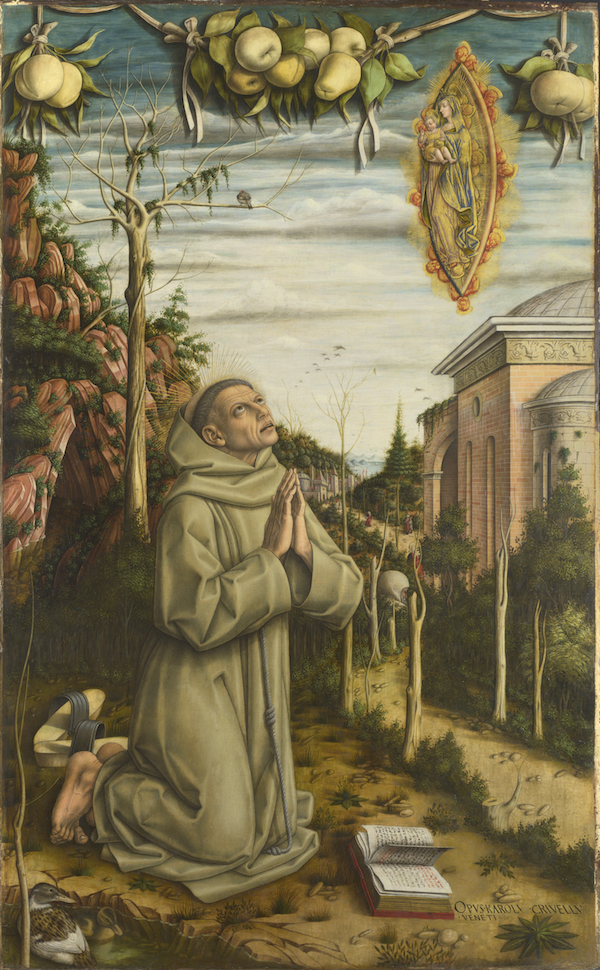 The Shadows on the Sky exhibition brings together a group of works spanning Crivelli’s career comprising altarpieces, small panels that once belonged to larger ensembles, and a stand-alone work intended for private devotion. The exhibition highlights his experimental use of perspective, trompe l’oeil (optical illusion) and sculptural relief to show how his paintings both suggest and undermine his own visual trickery to explore the coexistence of material and spiritual realities.

Unlike icons which function as windows to the divine, Carlo Crivelli uses his technical skills and experimentation to demonstrate that paintings are not windows onto other worlds but part of our object world. As such, Crivelli suggests that a painting is an object only for contemplation. As a result, it cannot replace a heavenly vision such as that which was granted to the Blessed Gabriele and depicted by Crivelli in The Vision of the Blessed Gabriele (c.1489, The National Gallery, London), representing a moment in which the Franciscan monk was confronted by a vision of the Madonna and Child.

Crivelli’s work, therefore, represents a significant conceptual shift in the understanding of both art and revelation, as well as being both technically and creatively innovative. In this Ikon exhibition, we are invited to consider Crivelli’s imagination and skill in creating illusions of illusionism and to reconsider Crivelli’s sophisticated understanding of the relationship between art and what it represents. The originality of his work, techniques and concepts all blend to create the contemporary influence of which Flack wrote. In her work and that of Indiana, we see the continuing ability of the art of faith to be both source and resource for contemporary art. 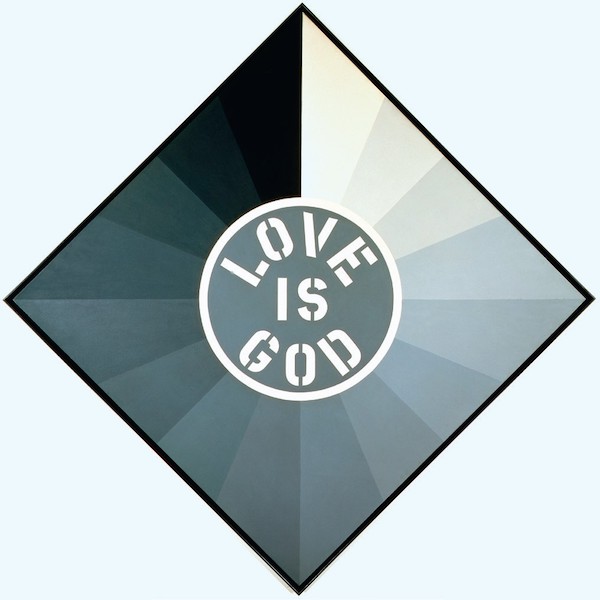 Indiana’s Love has a faith inspiration that also encompasses another earlier work. He described the work’s origins as follows when speaking with Barbarelee Diamonstein: ‘Well, it all started probably a long, long time ago, and it comes, of course, from a spiritual beginning. When I was a child, I was exposed to and involved in the Christian Science church…Most of them have no decoration whatsoever, no stained glass windows, no carvings, no paintings, and, in fact, only one thing appears in a Christian Science church, and that’s a small, very tasteful inscription in gold, usually, over the platform where the readers conduct the service. And that inscription is God Is Love…I had an idea to do a special painting…And that was the reversal of the religious motto. My painting read Love Is God instead…Although the Love Is God canvas bears no relationship to what now has become a logo, it started me thinking about the subject of Love…All these things kind of came together…That is how the LOVE came about.’ Both Love Is God and LOVE (Red Blue Green) (1966–1998) feature in the exhibition. The influence of Christian Science is also to be found in the work of Hilda Carline, Joseph Cornell, Evelyn Dunbar, Barbara Hepworth, Paul Nash, Ben Nicholson and Winifred Nicholson, among others.