The enthusiasm and support for artists exhibiting at IKON is encouraging. ‘The gallery programme features artists from around the world. A variety of media is represented, including sound, film, mixed media, photography, painting, sculpture and installation.’ The tour by curator Melanie Pocock and artist Betsy Bradley was enjoyable. 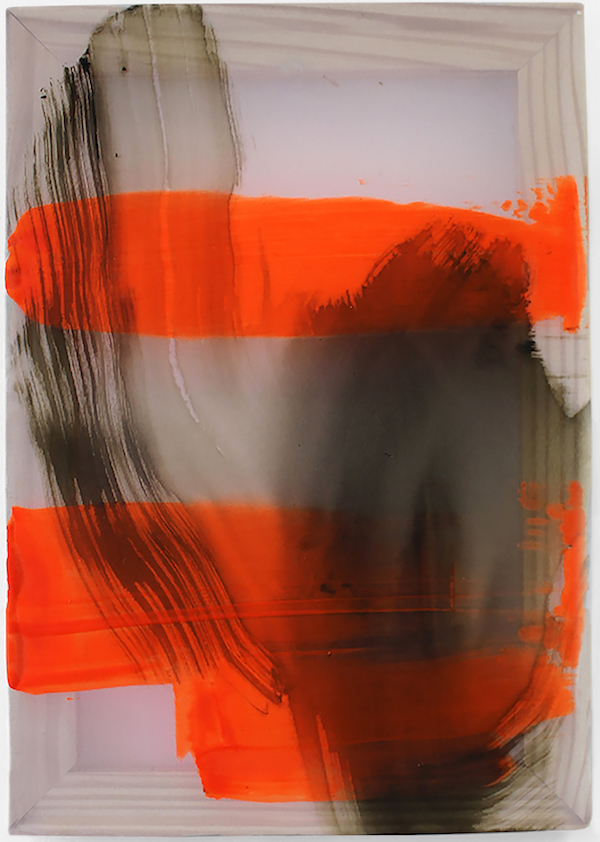 We all began the morning by gathering together downstairs in the gallery space where we were presented with films by artist James T. Hong, I was captivated by these films that presented “two films by Hong in which humans and animals are one and the same adaptable species that are equally capable of good and evil acts in given circumstances.” The Duck of Nature/ The Duck of God and De Anima. De Anima, a two-channel video installation, presented “three points of view: the artist’s, that of the “enemy” virus (Covid – 19) and a dog’s. The second channel shot in India at the historical location where the Buddha gained enlightenment reinterprets the first channel and represents the artist’s search for insight during the pandemic. In both elements, animals provide insight with witty observations about human behaviour.”

“Focusing on ideas of morality, Hong’s work prompts viewers to question their own biases and receive wisdom through confronting and often humorous philosophical narratives. This is his first solo exhibition in Europe.”

I enjoyed both films. In De Anima, the artist followed a dog through the streets, interpreting its thoughts. It was intriguing to watch how the artist had looked upon animals as embodying something that communicated and interacted with society beyond the normal mainstream paradigm of our relationship with animals. This is not something that you see very often, although people are starting to become more aware, I feel since there has been more concern for the environment and as a result, both are becoming interconnected. After being presented with the film and an introduction to his work online by Hong, which was presented by the curator, we were taken upstairs to view the Betsy Bradley exhibition, Chasing Rainbows..

“For her first major solo exhibition, Midlands based artist Betsy Bradley explores painting as a life force that traces “the dance between thought and action.”

The first thing you notice about the exhibition in the gallery is how beautiful and spacious it is. The IKON gallery has a feeling of a chapel inside, with arched windows leading upwards toward a buttress style ceiling. Everything is white and relaxing and perfect for displaying art. The light from the main arch window and the window itself echoes and compliments Betsy Bradley’s painting, Fireworks, a large blue abstract gestural painting created on dust sheet, 2021. Presented on the far wall as you enter the main gallery it seems to communicate with us in terms of dynamic movement and action.

The colours in ‘Betsy Bradley’s artworks are outstanding. The olive green shouts out to me, as does the blues and oranges. Works are painted and presented in various ways; suspended, draped and assembled. She uses an exciting and vivid palette, a combination of primary, secondary and tertiary colours along with pastels and fluorescents. Combined with attractive mixed colours of various hues and tones. In some ways, specific works felt a little like silk painting. The large gestural sweeping brush strokes were in many ways similar to automatic writing and calligraphy. The sweeping calligraphic gestures reminded me in some ways of Franz Kline.

The first room is displayed with a series of abstract works, including one painting that almost acts as another wall or screen: Boogie Wall (2021). Painted with acrylic and spray paint, you start to realise you can see through and beyond the fabric of these artworks. Shadows of people in the room overlap, move and intercept the painting, enhancing the artworks’ sense of depth and transience as if they are integrated with the painting so that the work not only becomes organically evolving within its own environment but also turns itself into a performance. In some ways, it offers a chance to think about art as a kind of phenomenon. 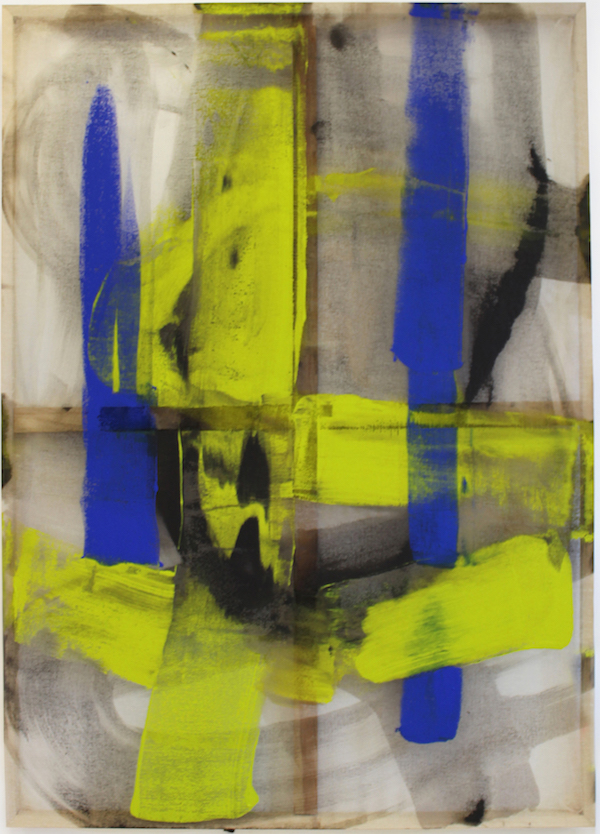 You can see through the fabric as Betsy uses voile, muslin and dust sheets for her paintings rather than traditional canvas and as a result, you notice this play of light and movement. Each artwork has its unique effect due to this diverse and innovative use of materials and interaction with light and the surroundings.

There are no descriptions or writing next to the artwork. You are left alone to immerse yourself in the experience without previous background knowledge. I enjoyed drifting through the artworks as part of a sensory experience. Being interested in art that uses fabric and mixed media, this was an ideal exhibition for me, particularly as I enjoy abstract art, textile art and spiritualism. Many of these works were inspired by the teachings of Buddhism, and there was a meditative and transient aura about the works, allowing us to look beyond the art but also beyond ourselves. It was peaceful and calming.

There was such a sense of calm and light as you walked from room to room. The main room exhibited paintings on the walls and a very large installation in the centre titled, Exhale, 2020, acrylic on voile, found wood, hemp rope. A beautiful ‘waterfall’ of painted voile suspended on a curved wooden rail from the ceiling that cascaded downwards to the floor, pleasing but also intriguing. Based on its title, one can gather their own interpretations. The title, Exhale, allows us to contemplate the idea of the breath, the idea of motion and fluidity and life force. Betsy told me she was in many ways painting with the material itself, often using the soft flowing fabric as an alternative medium to paint.

On the opposite side of the room, an enlarged ‘swing’ that looked like a normal swing but reinterpreted and created on a very large scale, similar to the way Claus Oldenburg created large replicas of everyday objects. It is somewhat dreamlike and reminds us of how dreams can distort the size of objects and places in our memory. The installation titled Above the Clouds, Beneath The Trees, 2021 was suspended from the ceiling. This idea of orientation within the works became apparent and an important part of the art itself. Betsy explained that it was a response to the idea of freedom and being a child once again, emphasising this uplifting experience, the sense of weightlessness and lightness. It moved slightly with the draught, and she described it as a ‘living entity, in the same way her works were ‘breathing’ and ‘alive’ observing a motion within them.

The main room led through to an immersive installation of fabric, Canopy, 2021, beautifully draped from the ceiling. Betsy described it as similar to cloud watching, a floating painted sky. We were looking upwards and viewing the underside of the painting. This translucence provided us with a sense of warmth and inclusion, incorporating her own hand coloured sand surrounding the edges of the gallery space, which reminded me of ocean waves and the shapes left behind as the tide pulled in and out, leaving traces of foam and natural engravIngs. This feeling of transience and movement was a continuous theme within her work. Light was pressing through colour. At times, her work looked solid, and at other times you could see the translucency. The sand was used as if it was paint, a sensual approach to using colour, light and space.

I was drawn to the sense of light and the tactile luminosity and transparency of the works that reminded me of sacred icons and something else that you can’t quite place at first. Everything feels somewhat ephemeral but also ethereal. With the transparency of the canvases and the feeling of weightlessness of the installations, I felt very inspired and elevated by what I felt was an honest, emotional, but also spiritual exhibition. It was in many ways exhibiting a mood and a feeling as a whole rather than just about individual artworks.

Betsy’s use of voile to paint on instead of traditional canvas is intriguing. This was the first time I have ever seen paintings on voile mounted onto stretchers and used in such an innovative way. It was really interesting and the frame became part of the artwork because you could see through the fabric and the paint, therefore, seemed to be floating on the surface and within the material itself. Of course, at certain times, you couldn’t see that it was transparent, but it had an effect of its own whether you were aware of it or not. 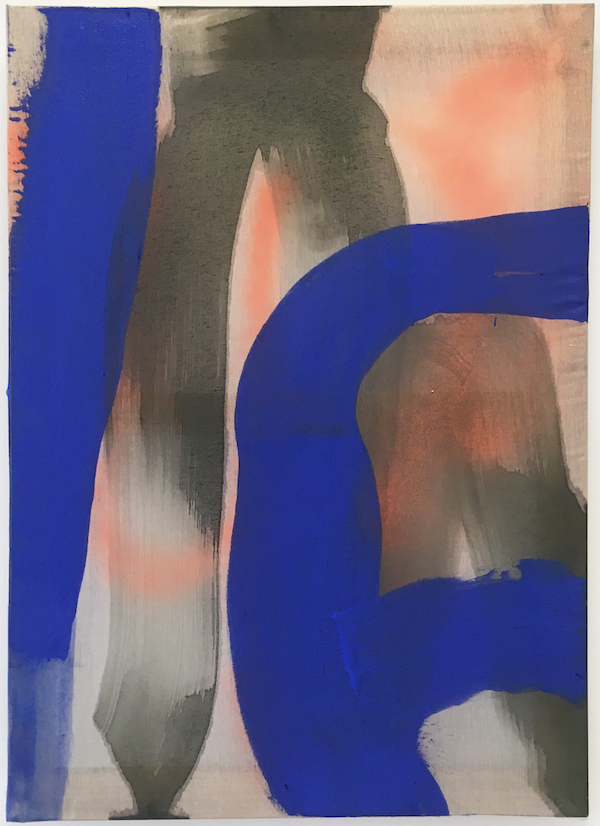 Betsy delivered a talk about her work. One person asked her about the title, and she said that she chose it because “rainbows are an example of intangible phenomena that inspire her and are an analogy of Buddhist teaching on emptiness.” Her works reflected the idea of causes and conditions coming together like water and light, which rise, becoming transient, something we can’t hold onto. One can only experience rainbows in the present moment. They arise and disappear in the same way as our thoughts and energies. Betsy enjoyed the playful fall of light on a surface and how it was in constant motion.

I asked Betsy about her interest in Buddhism, and she said that it had inspired her and many of its spiritual ideas ran through her work. She was intrigued by the unintended patterns in some materials, such as the voile that had a wood grain effect. We all agreed that this was unusual in synthetic material. This idea of natural and artificial had somehow contradicted itself or even blended with the other, natural wood and synthetic fabric. However, both had similar patterns which challenged our preconceptions of what was natural and what wasn’t and instead embraced the natural qualities of both materials.

“Always intuitive, her inspirations come from what she describes as “miraculous everyday phenomena”, such as the incidental colours of a patinated billboard or the intangible hues of light pollution in the night sky. Inspired by Eastern and Western traditions of Wabi-Sabi, Arte Povera and Mono-ha, Bradley celebrates chance as a means of freeing her artistic process and the viewer’s experience:”

Most of Betsy’s works were created at the gallery itself. The large frames and painting were carried out with huge brushes and large spontaneous and gestural movements. I enjoyed the way she approached her art with passion and without premeditation. She enjoyed the unpredictability of the creative process. Many of her works had given over to bodily movement and impulsive gestures, allowing the painting to unfold in the body’s movement by letting go.

Betsy said that her working process embraced the idea of working on more than one piece simultaneously. This idea of one painting leading to the other was refreshing and challenged the notion of works being created in isolated states. Still, instead, everything was fluid and linking together through energies and motion. Orientation was also crucial in her work. Viewing the works, one was aware of the variety of angles the work inhabited. You would find yourself looking upwards and through and downwards in a niche section of the gallery, an intriguing sculpture titled See Saw. She was alluding to the idea of a playground. It was made from found wood that already had the orange colour and black paint. Playing around with painted unintended curtains, Betsy used this as a folded cloth and the sculpture made itself. I enjoyed this piece for its total spontaneity and immediacy, a found piece of wood, a collaboration of random found objects that suddenly became a happening, a playful and exciting piece of sculpture.

Bradley is playing with the idea that things may not be as they seem. In the same way, rainbows are transient and arrive and disappear. So do go and see this innovative and vibrant exhibition.