Bloomberg New Contemporaries flies its Georgian nest for Block 336, an edgier artist-run space in Brixton.  We took a closer look at the work of six emerging artists who stand out from the crowd.

For the best part of 70 years, New Contemporaries has been arguably the most prestigious British programme to support emerging artists. The list of former selectees is awash with mega-watt names from David Hockney and Antony Gormley to Peter Doig and Anish Kapoor, so inclusion in this annual exhibition is still amongst the greatest honours that can be bestowed upon a new artist in this country.

Since the 1960s the BNC’s exhibition was held on and off at the ICA in St James, just a stone’s throw from Buckingham Palace. Such a grand and historic setting offered a sharp contrast with the new and challenging work on display, giving a sense of gravitas to pieces by artists mainly fresh out of art school. This year however, the show has packed up for a space that perhaps has a more natural fit: Block 336 in Brixton. The move to a basement in south London is both less convenient and less glamorous – the gallery space is accessed from the ground floor of what looks like a council planning office – which probably amps up the cool factor considerably, and will hopefully attract a new south-of-the-river audience. 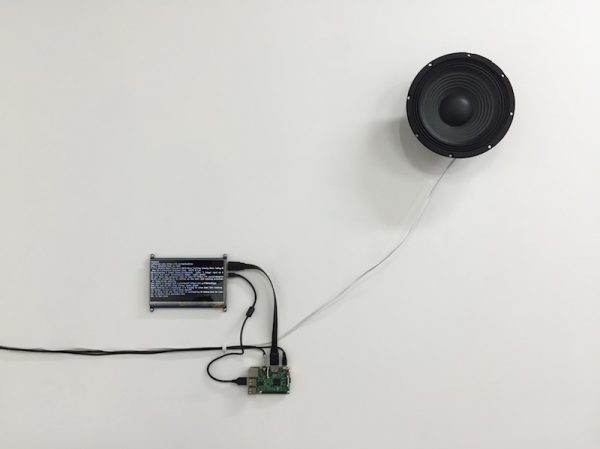 The artists chosen this year represent a range of media from more conventional painting to digital art. Although technologies such as video and electronics are often perceived as being cutting edge and “now” but really the opposite is true. Artists have been using these technologies for as long as they’ve been around, and despite being frequently pushed by both public and commercial galleries the art often fails to leave even a shred of the impact that more traditional creative methods do.

Nevertheless, Jake Elwes, a graduate of the Slade who specialises in technological sculpture, makes an attempt here at digi-art that is very successful. “Digital Whispers” consists of a custom javascript programme hooked up to a rudimental screen and speaker that distortedly reads out seemingly randomised tweets. Standing in the work’s presence for a few minutes and trying to make sense of the speaker’s babble quickly reveals Elwes’ piece as a metaphor for what we are all doing on Twitter most of the time – consuming endless incoherent nonsense. 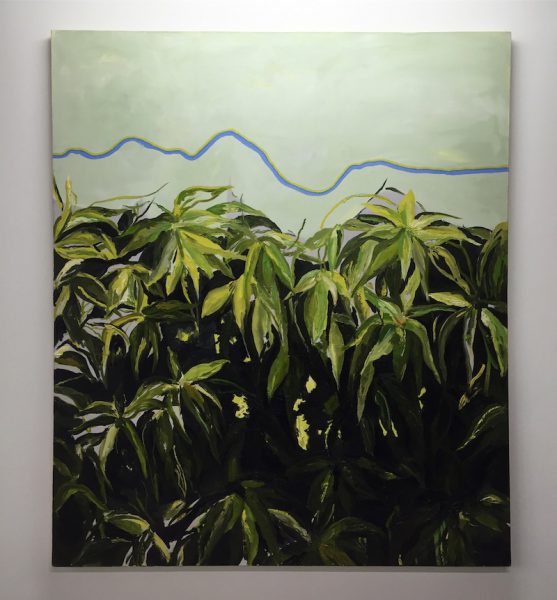 Ultimately though it is the works in more traditional media that stand out this year. Michaela Yearwood-Dan is a painter through and through. A second-generation black woman and alumnus of the Fine Art Painting course at Brighton University, Yearwood-Dan’s unashamedly painterly style uses a deliciously rich and bright colour palette that references the stereotypical view of the West Indies and “exotic” persons who come from them. She challenges these notions by positioning that same palette with scenes from the realities of her urban, grayscale life. In “Springs” luscious green foliage appears to grow from the bottom of the painting, while above it an assuming blue line snakes across the canvas. At first glance that line reinforces the idea of a moist and plentiful jungle, but on more detailed inspection can be identified as an aerial view of the Thames. The artist’s origins may lie where that foliage grows, however what sits at the forefront of her immediate reality is not exoticism but sprawling, metropolitan London and that twisting, dirty grey river. 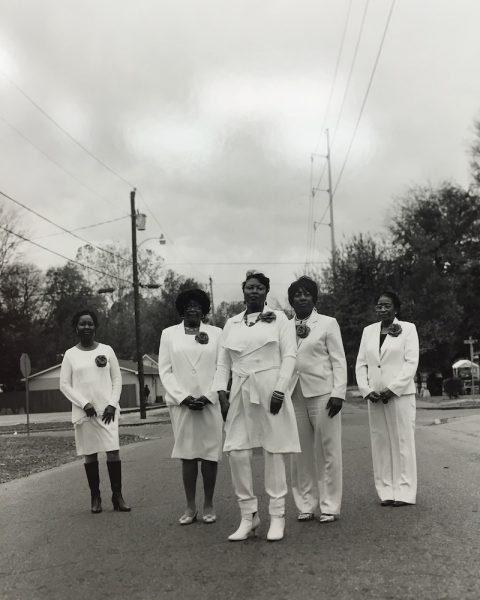 Representing photography with a handmade silver gelatin print, Melissa Magnuson’s “Greenville, Mississippi” is a visually stunning image of five middle aged African-American woman dressed entirely in white standing on a road in America’s deep south. Magnuson’s work seeks to research and explore the stories, half-truths, and memories of our world through an examining of landscape, identity, and power. Her work is always topical, peeling back the layers of socio-political and economic experiences to find a meeting place between the stories of the communities she works with and her own journey as an artist. It’s a process of understanding and collaboration we should all be adopting. 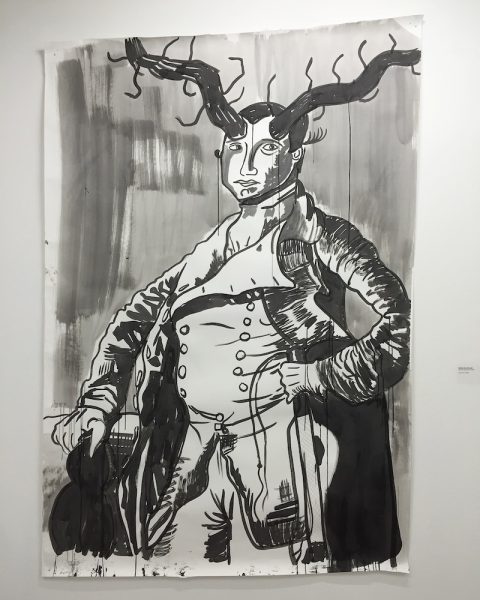 One of the most striking images in the exhibition is a large scale Indian ink painting on paper by Nathan Roy Newton, a recent graduate of the MA course at the University of Lincoln. Entitled “Horned Aristocrat” the commanding work depicts an angular-jawed man in historical dress with large black horns that protrude from his forehead. The piece references ink’s historical use for engravings and etchings that were often commissioned by the societal elite to depict themselves. Newton borrows the gravity and sobriety of the stylings and proportions of old master painting, whimsically subverting them with a quick and inexpensive technique. The resultant work was something that the collector in me immediately wanted to buy. Sublime. 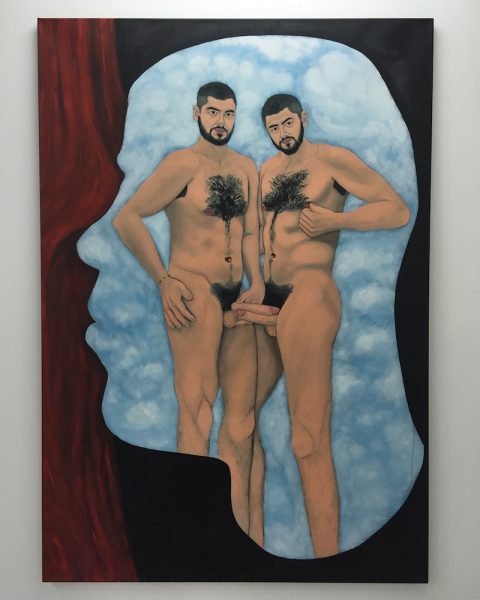 Homoeroticism of sorts makes an appearance in the work of Glen Pudvine, whose self-portrait “Parking the Bus” depicts two naked men, both of them the artist himself, holding their aroused genitalia together. They stand in-front of a blue sky silhouetted male head, somewhat reminiscent of Magritte, which itself is flanked by what appears to be a red velvet curtain. Pudvine, currently on the Fine Art masters at the Royal Academy, often paints self-portraits, which he suggests allow him to paint what he feels instead of what he sees. His work is preposterous and pumped with masculine confidence, but a strong technique and sense of humour carry it off well. 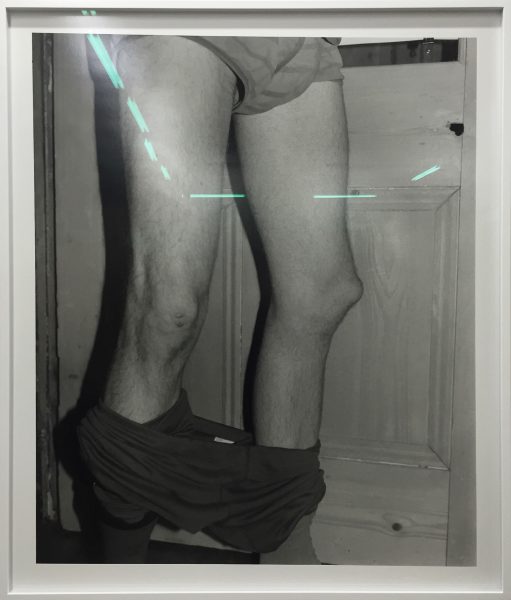 Next to Parking the Bus sits another self-portrait with readings of the homoerotic. Silver gelatin photograph “My favourite thing” shows off Martin Sekera’s bare legs, his pyjamas sitting crumpled around his ankles. A pair of well-worn grey underpants cover his modesty, though they hang slightly loose around his genitals, suggestive of forthcoming sexuality. The artist confesses that he is exploring his own sexuality and believes attraction drives curiosity. In My favourite thing the male body is a desired object waiting to be uncovered, it is both owned by the artist and desired by him. Though visually far more subtle than Pudvine’s painting, Sekera’s restrained photographs create a sexual energy that buzzes through the gallery space.

Bloomberg New Contemporaries 2017 is flowing with talent, and there is much else to see besides the works highlighted above. While the journey to this modish new space is now all the more laborious for those not south of the river, it is a journey certainly worth taking.