When the Royal Academy was founded in 1768, one of its key aims was to establish an annual exhibition open to all artists ‘of merit’ (as long, one might add, that they were white, male and mostly middle class). Held every year since the Summer Exhibition is the world’s oldest submission exhibition with works selected and hung by Academicians. Originally all work was figurative. Paintings were hung from dado to cornice, abutted and tipped towards the viewer and arranged symmetrically. History painting dominated, along with vanity portraits by artists of the day. Celebrity painters such as Joshua Reynolds got the best spaces, whilst the work of the lesser-known was hung almost at ceiling height. It was, also, coincidentally a period when Britain’s involvement with the slave trade was at its height.

The exhibition starts with a bang – SH

Since then, the exhibition has been a marker in the establishment’s social calendar, along with events such as Henley and Wimbledon. A favourite of ladies who lunch and those up for the day from the shires. For years it was the zenith for Sunday painters who’d religiously send in their cat paintings and flower arrangements. But, in the topsy turvy world of Covid, this year’s exhibition had to be delayed. This may not signify very much, other than that we’ve been in the midst of a pandemic, but with this shift, there’s been a further breaking of old moulds. The exhibition starts with a bang, mirroring the changes within contemporary society and the role played by those from diverse ethnic backgrounds.

This year’s show has been coordinated by Yinka Shonibare RA, who has stamped it with his mark, the explorations pursued in his own work into colonialism and post-colonialism, race, class and cultural identity. Marginalised voices have been restored, and many artists are showing here for the first time. There’s a strong visceral feel to the show, which includes quilting, knitting and sculpture made from non-art materials, as well as more traditional painting, and the parameters have been expanded to include sound works. There’s a sense of things finding their rightful place, of the marginalised finally being included and brought into the fold. 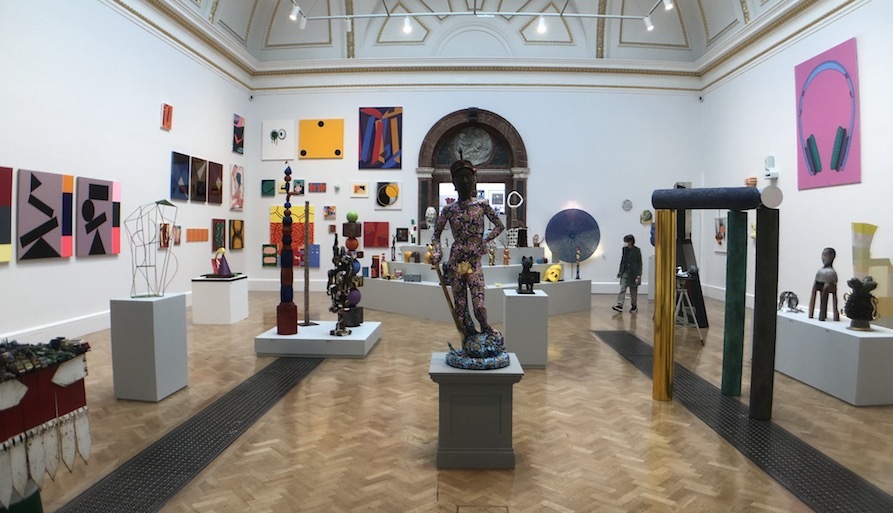 This year’s theme, ‘Reclaiming Magic’, not only celebrates the joy of making art but also its transformative potential, marginalised practices and ritual powers. The journey begins with the work of Bill Traylor, an African American artist born into slavery in 1854, who didn’t start making art until he was 85. Self-taught, his work inspired the idea of looking beyond the conventional boundaries of western art history. Shonibare has invited a number of international black artists to exhibit, including Michael Armitage and Betye Saar. Ellen Gallagher’s Elephantine, a map of Africa, has an elephant’s head embedded in the colours of the Belgium flag, while Kudzania Chuira’s single-channel film, We live in Silence (Chapters 1-7), is a cross between The Last Supper and a Bacchanalian orgy with militaristic overtones. One of the most disquieting works is an offset print by the black American artist Faith Ringgold, The United States of Attica. A red and green map of the United States, it is dedicated to the men who died in 1971 at the Attica prison for demonstrating against deplorable conditions. Written across each state are descriptions of various unspeakable acts – witch hunts and lynchings – that took place. At the bottom of the work is a direct appeal to viewers to update the poster. 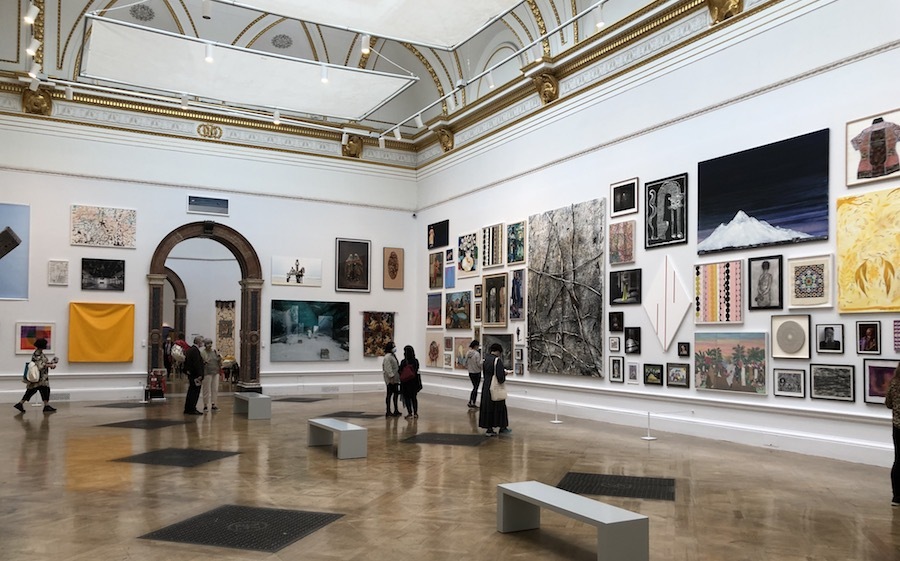 This year’s curators include Humphrey Ocean and Bob and Roberta Smith, Vanessa Jackson and Eva Rothchild, and the energy remains high octane throughout with a shiny lipstick red painting by Gary Hume and a vast red and white floor-seated pineapple by Rose Wylie that has all the wacky playfulness of the outsider artist. There’s a great work by Frank Bowling made from what can only be called rubbish and strong paintings by British academicians such as Basil Beattie, Tony Bevan and Mali Morris, with some lovely little figures by David Remfry. But it is the energy of those artists who would have never got a look in during Joshua Reynold’s day, who’d have been serving the drinks to their bewigged ‘masters’, that gives this summer exhibition its freshness and vitality. Finally, it is they who get to go to Varnishing Day and the RA dinner – it’s almost grounds for optimism.

Sue Hubbard is a freelance art critic, award-winning poet and novelist. Her latest novel, Rainsongs, is published by Duckworth and her fourth poetry collection Swimming to Albania is out from Salmon Press this autumn.