Entering the new British Baroque show (as one does) from Tate Britain’s central upstairs space, currently, home to a multitude of group photographs of pupils in London primary schools is to enter a different world. Different socially, different aesthetically. Above all, different, in the attitudes, the event expresses concerning what visual art is about.

The more closely you look, the more resonant the exhibition becomes – ELS

The show is a survey of what happened to art in Britain, from the Restoration that brought Charles II to the throne in 1660 to the death of Queen Anne, the last Stuart sovereign, in 1714. This period embraces the Acts of Union, which in 1707 brought England and Scotland together as a single state.

As one looks around the galleries devoted to the exhibition, certain elements are striking. It is very much a show about portraits – images of the great and good. Though there are quite several portraits of Charles II (not so many likenesses of his successors), dominant are likenesses of women. Almost invariably, very well-dressed women, with all their clothes on. Nudes are in short supply, though they feature in some allegorical compositions. In fact, male nudes – representations of the almost-nude crucified Christ – are more vividly present than female ones. There is a complete absence of female artists. Women were the subjects of art, not the makers of it. 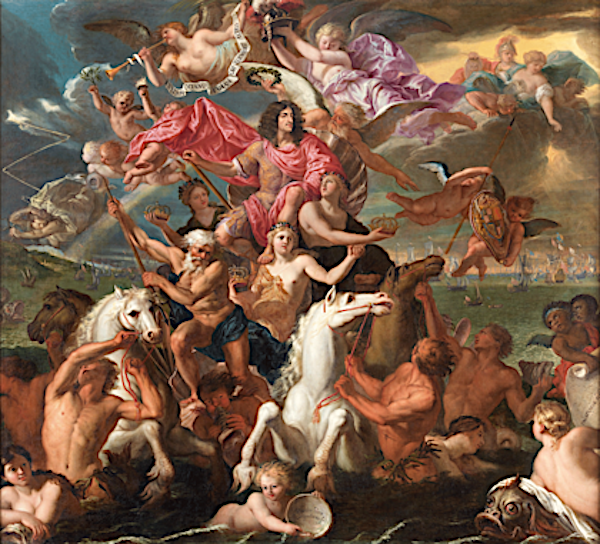 Reading the catalogue, however, makes it clear that aristocratic women were often important as patrons. Artists at this period did what patrons told them to do. This was particularly the case when it came to making representations of the human figure. Portraits were almost always commissions. Still life paintings perhaps not. Most, though not quite all, of the prominent painters at work in Britain during this period were of foreign birth. Some were Italian. Others came from the Netherlands. Sir Godfrey Kneller (1646-1723), the leading portrait painter of the period, was born Gottfried Kniller is Lübeck, then part of the Holy Roman Empire. He studied in Leiden, then under Rembrandt and Ferdinand Bol in Amsterdam, then worked in Italy, in the studio of Carlo Maratta, before coming to London in 1676. Itinerant careers of this sort were not uncommon in the European art world of the time.

In 17th and early 18th century Britain, however, the leading architects – Wren, Hawksmoor, Vanbrugh – were all British born, though Vanbrugh’s grandfather was a Flemish merchant. It is the creations of these architects – St Paul’s Cathedral, Blenheim Palace – that now tend to define our vision of what the creative Britain of this epoch was like. The Tate exhibition, obviously, can’t include these and other huge creations, but it does its best to memorialise them.

Basically, this epoch – just a little more than half-a-century – was a period of catch-up, following the disruption of the Civil War. There were natural disasters, such as the Great Fire of London, which gutted the medieval City of London in 1666. There were also continual European wars, as Britain and its allies competed with the France of Louis XIV. In these conflicts, the British were surprisingly successful. One thinks of the successive victories of the Duke of Marlborough – Blenheim (1704), Ramillies (1706), Oudenarde (1708) and Malplaquet (1709).

To some extent, the British Baroque show reflects this growing mood of national triumphalism. The exuberant allegory The Sea Triumph of Charles II (c. 1674) by Antonio Verrio reflects the first phase of this. The exhibition is less emphatic, necessarily, in revealing the domestic upheavals of the time. Nevertheless, it does its best to do this. The rebellious Duke of Monmouth, Charles II’s bastard, who tried to overthrow James II, appears in a portrait from his teenage years in the guise of St John the Baptist. Barbara Villiers, Duchess of Cleveland, Charles’ official mistress, is portrayed as the Virgin, holding another of the king’s illegitimate offspring in her arms in the role of the infant Christ.

The more closely you look, the more resonant the exhibition becomes. When you come out, into the central space once again, with its rollicking kids in school uniform, admiring and/or ignoring their class photos clothing the walls, you tend to wonder if self-congratulatory democracy in the visual arts is, in fact, such a good thing. It seems unlikely to offer any very resonant message to posterity from a Britain now on the way out from Europe rather than one, as in the British Baroque show, from an increasingly self-confident nation which in those distant days was on the way in.