Late, as often can be the case with our timetable, we arrived at Bridge Point Rye creative arts centre at a deserted exhibition. Everyone had been shipped off in minibus, or on eco-electric bikes or had somehow gone to view the highlight of the exhibition, the eight-metre-tall temporary installation at Rye Harbour nature reserve, Joseph Williams’s bamboo tent.

The installation felt genuinely inclusive and diverse and educational – JCM

My first encounter with the work of the Climate Art residencies was the work of Mo Langmuir and Alistair Debling. First, Mo Langmuir’s work. As an artist with a professional background in biological science, her practice here foregrounded process in a manner acquired from a science museum. A jar of seaweed photo developer (on loan from fellow artist Alistair Debling) was made more interesting with explanatory text; a brew made from local plants such as sea kale foraged from Rye Harbour with washing soda, vitamin C and phenols was used to develop, giving a natural and unpredictable stain to industrially produced black and white film negatives. Other artist materials displayed included a cloud stencil from Sarah Desmarais produced from mulberry paper soaked in fermented persimmon juice then sealed with smoke to waterproof the stencil for printing on textiles. These were just two of the bio-samples sourced locally from local artists. The installation felt genuinely inclusive and diverse and educational. The images were soft and reflected the exhibits that might be encountered in a traditional (Victorian?) cabinet of curiosities. The red weather balloon displayed brightly at the entrance of her ‘section’ was not simply there for visual impact. It had mapped the three ‘SSSis’ with a camera, capturing samples from animal, vegetable and mineral sources. Her exhibit was quirky and playful and I found it transparent, rich and educational, meaning was not obscured. It was pulled out and presented. This was helpful. In its slightly remote (not too remote!) It helps to have exhibits that have a lot of value, art that has a lot to offer. I could have spent longer learning and thinking about the objects and meditating on the processes, acquiring new facts and marvelling over the simplicity of experimentation with natural materials. It was energising to me as an artist who likes to play with materials. Langmuir claims her practice is empowering and I found this to be borne out in this exhibit. 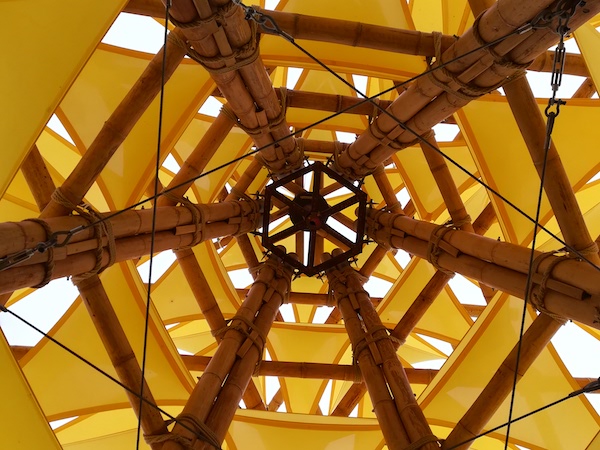 Sadly, Alistair Debling’s characteristically ambitious film installation was hampered by the playback of which made it hard to take in. It’s so difficult to get this right in an exhibition space. Unfortunately, it felt overloud and bounced about in a way that made it unpleasant to listen. It was a shame as visually it was stunning, with the cleverly appointed screens at ninety degrees, the drone footage was impressive, as drone footage often is, and the landscape indeed lent itself to this. There was much to listen to in the soundtrack with the multiple perspectives of the contributors. Debling is known for his research-based enquiry of ecology, queer nightlife in multiple forms of time-based media, but I didn’t feel compelled to sit and listen because of the difficulties. Hopefully, that will be addressed and made more comfortable as the exhibition goes on as there must be a wealth of fascinating information gathered.

I sat and watched the film about the construction of Joseph Williams’s standout piece of bamboo architecture. And one by one, the event attendees began to drift in, excited and chattering from their adventure to see the structure. What was it like? I asked those who were returning. ‘Wonderful, you must see it,’ was the general opinion. ‘I do sailing,’ one woman told me, ‘and it is amazing how it was put together, how it was constructed with simple techniques.’ The use of the string, of the ropes, she said, reminded her of knots for rigging. The use of tension to hold the structure in place was sensitive to the needs of the environment.

From the reports of the visitors, I knew I had to see ‘The Beacon’, but rain hampered this part of my venture. A few days later, I found the window I needed to see the structure. We went down the walkway and saw it shining at the end like a sun. The yellow cloth reflected the light, shimmered in the sky. It was more beautiful than it had appeared in the film about its construction, and that had been a compelling film. The structure, it said, was, in a sense, a metaphorical lighthouse, and indeed it was. Its colour was taken from a local plant, the yellow-horned poppy, whose flowers only last for a day or so before being blown off by the estuary wind. It was envisaged that the structure would be used for activities. When we arrived, a group of students were eating their lunch there and we wandered on the seafront watching the cormorants and wader birds. Grey skies blew along the horizons and we saw the light shine on East Hill. Surely no artistic building could stand up to this beautiful environment? But like the temples I have seen in Thailand and Mauritius with gold shining domes in the jungles and mountains, the vibrant yellow structure shone and it was pretty glorious. I stepped inside. Was the building squeaking? Was that the ropes shouting like ships at sea. No. It was a flock of sandpipers whizzing overhead. Plovers? Sandpipers? My knowledge of birds let me down. But as the birds circled the tent above us. Returning and returning, I enjoyed the natural audio more for my special experience of being inside the golden structure.