Cornelia Parker’s inaugural survey show in London spans a 35-year period, from the 1980s through to 2022. This multi-sensory, multi-media exhibition features close to 100 works including sculpture, photography, film, installation, drawing and embroidery, and confirms how ahead of the zeitgeist Parker was when starting to create immersive exhibitions where the process of creating the art is just as important as the end result, and negative spaces are often more potent than positive spaces (in particular with ‘Cold Dark Matter: An Exploded View’, 1991).

Parker created two new works specifically for this solo exhibition at Tate Britain; ‘Flag’, 2022, and ‘Island’, 2022, an installation in the form of a greenhouse. The greenhouse is marked with paint made from chalk from the White Cliffs of Dover, and the floor covered with tiles reclaimed from Westminster Palace, in a comment on the polarised politics of the UK which led to Brexit, coupled with the British government’s unsympathetic attitude towards migrants reaching Dover across the British Channel. With ‘Island’, Parker has cleverly visualised the old adage that ‘People in glass houses shouldn’t throw stones’. 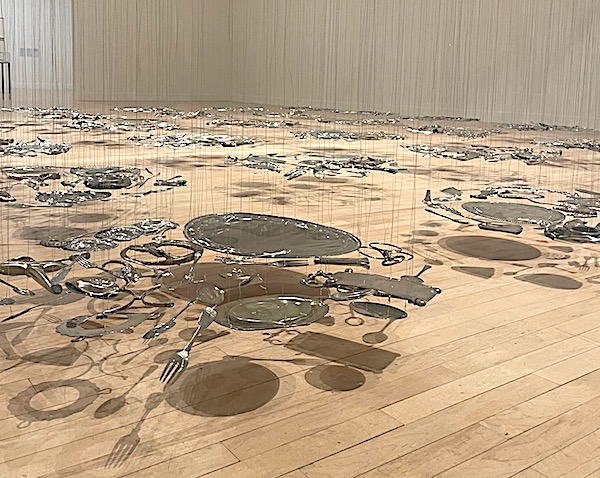 This is a rare opportunity to see some of Parker’s ‘greatest hits, as the exhibition opens with a room dedicated to ‘Thirty Pieces of Silver’, her 1988-9 installation featuring flattened silverware suspended just above the floor from fine wires, while the 3rd room is the pièce de resistance – the captivating ‘Cold Dark Matter: An Exploded View’, 1991, which freezes in time the moment of her garden shed which was blown up by the British Army in a controlled explosion, and is now part of contemporary art historical legend.

‘Cold Dark Matter: An Exploded View’ can be viewed from 100’s of different angles, and the shadows of the objects that move spectrally across the walls of the gallery, are just as intriguing as the objects themselves.

Parker’s installations are unique reconfigurations and explorations of some of the most ordinary objects that form part of our day-to-day lives, objects which we often overlook. Both sculptural and conceptual, her multi-layered artworks combine historical, literary, biblical, mythological and pop culture references with intriguing narratives. For example ‘Thirty Pieces of Silver’ was created from silver objects collected by the artist at markets, car boot sales and auctions, which she flattened with a steamroller in a nod to the cartoon ‘deaths’ of Tom & Jerry and Roadrunner, characters in her favourite childhood animations.  The flattening of the silverware was also a subconscious reference to the demolition of her East London home to pave the way for the M11, whilst the title ‘Thirty Pieces of Silver’ title is derived from the amount of money Judas received in return for his betrayal of Jesus, as written in ‘The Bible’.

Parker also flattened old brass musical instruments to create her installation ‘Perpetual Canon’, 2004, to create a ‘mute marching band’ by suspending the one-dimensional objects in a circle from the ceiling of the gallery, erasing the chance of the instruments making sound, and replacing it with a visual performance of shadows on the gallery’s walls.

‘Thirty Pieces of Silver’, ‘Cold Dark Matter: An Exploded View’ and ‘Perpetual Canon’ all show the highly tuned photographer’s eye that Parker has for the power of light and shade, and the interplay between positive and negative spaces. Parker’s unique installations are so captivating, because they  demonstrate her realisation that focussing on negative spaces and what is left unsaid can be the most effective way of communicating. She deconstructs some of the most benign and everyday objects to subvert our notion of abstraction.

Parker says: “If I could somehow plumb their depths, tap into their inner essence, I might find an unknown place, which by its very nature is abstract…both representational and abstract at the same time.”

For me, the most moving installation at Tate Modern is ‘War Room’, 2015. When Parker was invited to create an artwork about the First World War, she visited the poppy factory in Richmond, where artificial poppies have been made since 1922, and are sold to raise funds for war veterans, ex-military personnel and their families. She noticed the perforations – negative spaces where the poppies had been punched out of the material used to make the poppies – and saw this as a metaphor for the millions of lives lost during World War 1. ‘War Room’ is a tent-shaped structure within a room, with material punctured with around 300,000 poppy-shaped holes suspended from the structure. Parker based the Marquee-shaped ‘War Room’ on the tent that Henry VIII had made for a peace summit in 1520 with the French King, François d’Angoulême, which became known as the ‘Field of the Cloth of Gold’.

Parker cites her influences as including Claes Oldenburg’s ‘Proposed Monuments’ series, Kurt Schwitters ‘Mertzbau’, Christo and Jeanne-Claude’s ‘Running Fence’, Gaudi’s architectural models and Richard Long’s walks. Yet hers is a distinctly unique and multi-layered artistic practice and not derivative of any artist or movement in particular.

Parker’s work can be subversively political and at the same time deeply community-orientated.  For example, ‘American Gothic’, her October 2016 film of Donald Trump supporters during a pre-election pro-Trump rally outside New York City’s Trump Tower on Halloween is deliciously satirical, for the subjects have no idea that they are being made to look like deranged clowns on camera, and Parker subtly unveils the playground politics of the American alt-right.

While at the other end of the spectrum is Parker’s epic artwork ‘Magna Carta’, 2015, which demonstrates her continued eagerness to engage with contemporary topics dominating the news cycle, and invite different generations of the community to comment. Parker invited more than 250 people to stitch words onto ‘Magna Carta (An Embroidery)’, including Baroness Doreen Lawrence and Edward Snowden, who stitched the word ‘Liberty’.

This is a timely and captivating retrospective of a deeply intelligent artist who absorbs the world around her, and feeds her observations into an artistic oeuvre which is at once a comment on our society and a boundary-breaking exploration of abstraction.

Words and photos by Lee Sharrock

Cornelia Parker is at Tate Britain until 16th October 2022