‘Here, as in Heaven’ is the title of Ndidi Emefiele’s current exhibition, a body of work representing the artist’s philosophical attempt to understand the tragic death of her sister.

These paintings represent a significant shift from the playful conjuring with the complexity of contemporary experience and female identity that characterised her earlier work. They are works that carry the vestiges of pain from loss of relationship with her sister as they seek to question life, the afterlife, the passage of time, and being. Like so many artists before her, Emefiele is engaging with the intangible mysteries of existence in ways that explore the possibility of the beyond.

Richard Pousette-Dart, examples of whose work can be seen at Pace Palo Alto, once noted that ‘Within or about every living work of art, or thing of beauty, or fragment of life, there is some strange inner kernel which cannot be reached with explanations, examinations, or definitions… It is this living particle which makes art mystical, unknown, real and experienceable’. With that notion in mind, his work can be understood as ‘forwarding something fundamental about the mystical nature of the universe: its openness, its expansiveness, and its unknowability’. Emefiele’s new work also reaches that strange inner kernel which makes the unknown experienceable. 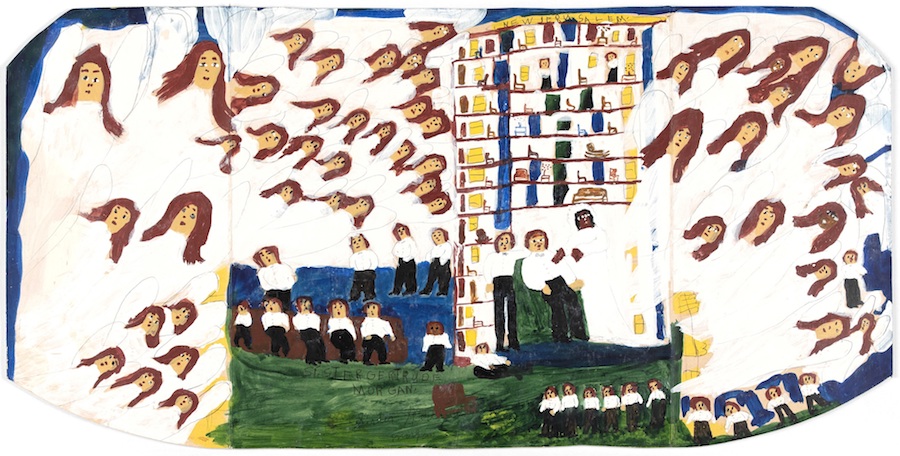 Belief in an afterlife beyond this world was fundamental to the art of Sister Gertrude Morgan, whose work features in its first major gallery exhibition in a European context at The Gallery of Everything. Following a series of divine revelations in 1957, Morgan began to paint pictures of the New Jerusalem on the outside of her Everlasting Gospel Mission in New Orleans. Painting onto any surface she could find – paper fans, scraps of card, serving trays, window blinds – she depicted a utopian vision of a world in which people of all races live in harmony. The New Jerusalem resembled New Orleans – angels alongside skyscrapers full of people of all races – with Morgan’s marriage to Jesus symbolising her fusing of the everyday alongside the divine. Painted patterns formed by crowds of repeated angels or tower block dwellers and their rooms visualise the unity experienced in heaven. 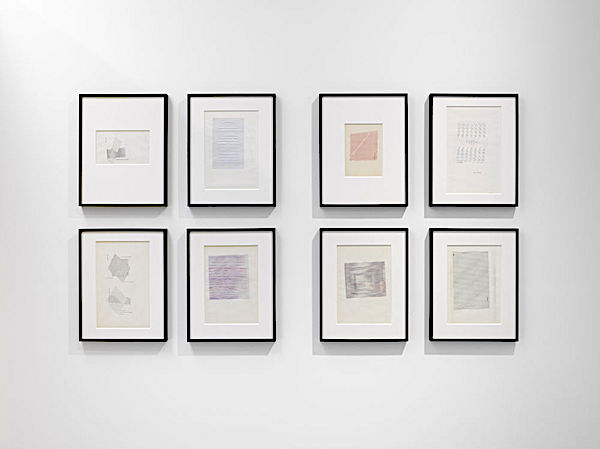 The linguistic mysticism and the synthesis of influences – ‘ a wider ecumenism’ – that characterised the work of the artist, beatnik and monk Dom Sylvester Houédard leads in a similar direction to that of Morgan. Known primarily as a leading theorist and international practitioner of concrete poetry dsh, as he was known, also created ‘cosmic patches (attempts at repairing the universe)’ which collaged the visible matter of words and detritus collected from newspapers and his travels – feathers, leaves, sand, dust and invisible ‘antimatter’ – sandwiched between two sheets of transparent plastic. This practice of weaving and transforming matter into spiritual, bodily experience demonstrated a confluence between the spiritual, the intellectual, the guttural and the sexual and can be viewed at GalleriesNow in an online version of a recent Lisson Gallery exhibition: Dom Sylvester Houédard: tantric poetries.

The meticulously constructed textual compositions of dsh range from mathematically and geometrically rigorous compositions of lines and letters to freeform, staccato word poems. These ‘typestracts’ use language to celebrate patterns. Similarly, Pousette-Dart’s energized interplay of patterns of light and colour explore the transcendental and symbolic possibilities of abstract art. 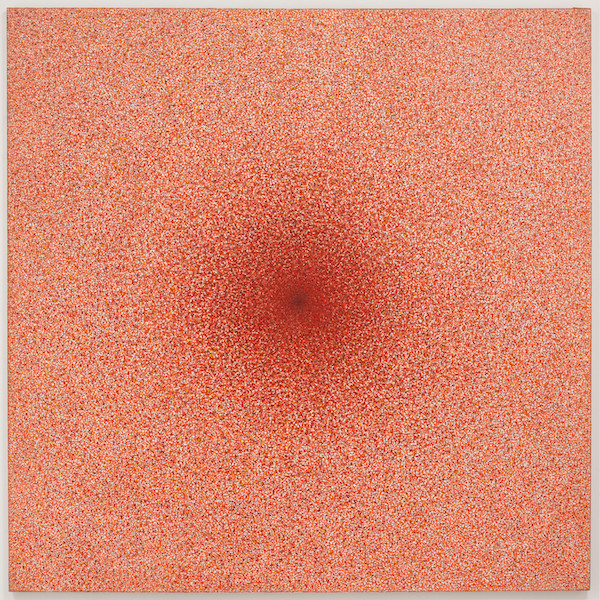 The quilters of Gee’s Bend (see top photo) are known for vividly patterned and multi-layered textiles whose compositional language varies from minimalist constructions to intricately pieced geometries. These combine the interplay between symbols and asymmetry referring to histories of African textiles while also evoking the formal qualities of Modernist painting. Their inventive improvisations suggest jazz riffs through unpredictable sequences of patterns, bold colours, and numerous approaches to form rather than rigid grids. Their quiltmaking is often done to haunting gospel harmonies and ecstatic, spontaneous prayers amidst the ongoing rhythms of stitching with the ‘call and response’ element of gospel worship also being intrinsic to the target-like push and pull among elements of their designs.

The most intuitive and inspired element to their pattern making is found in the way that strict symmetries and colour harmonies are subverted by deviations that depart from rigidity and introduce variety. In the religious context of their making, this is known as being led by the Spirit. Emefiele’s use of collage also disrupts her surfaces in similar ways adding further depths of meaning and resonance within her work. Like the Gee’s Bend quilters, Morgan would have understood her artistic practice as having similar Spirit-led inspiration, particularly in terms of the messages she received regarding the focus of her art in its different phases.

The residents of Gee’s Bend are almost all descendants of slaves who worked on the original Pettway plantation—many bear the slave-owners name to this day. Initially, they created out of necessity and a staunch belief that nothing should go to waste. When the nights grew cold, the women would stitch together scraps of fabric to insulate their children’s beds. A common practice was for the quilt makers to publicly ‘air out’ their quilts every spring. During the Civil Rights Movement, the community gained national recognition when they established the Freedom Quilting Bee collaborative and distributed their quilts across the country. This came about through the inspiration of The Rev. Francis X. Walter, an Episcopal priest working in the area to document civil rights abuses when he saw the airing of the quilts.

Folk art collector William Arnett then acquired hundreds of quilts in the 1990s, and in 2002, seventy were featured in the exhibition, The Quilts of Gee’s Bend. Earlier that same year quilts by Rosie Lee Tompkins, from the collection of Eli Leon, featured in the Whitney Biennial. Tompkins, like the Gee’s Bend quilters, was directly inspired by religious ideas and described her process as meditative. 2002 was the year that these quilt makers gained recognition as significant artists. Now Alison Jacques Gallery is presenting the first solo exhibition in Europe devoted to three generations of women artists living in Gee’s Bend.

Loretta Pettway Bennett says, she ‘came to realize that my mother, her mother, my aunts, and all the others from Gee’s Bend had sewn the foundation, and all I had to do now was thread my own needle and a piece of quilt.’ This aspect of the practice of the Gee’s Bend quilters reveals the importance of communality and continuity with the quilts signifying both a collective past and a hope for the future.

The continuity of relationship expressed in the handing on of tradition and design at Gee’s Bend is also the focus of Emefiele’s paintings responding to the loss of her sister. Hers are paintings which suggest that although her sister may have left this earthly life as a physical presence, she remains even if no longer in a tangible form. Continuity of relationship is what Morgan reveals in paintings depicting her marriage to Christ that eternally fuse the human and divine. While for Pousette-Dart and dsh there is a cosmic patterning of which we are part and which sweeps us up in an eternal dance. 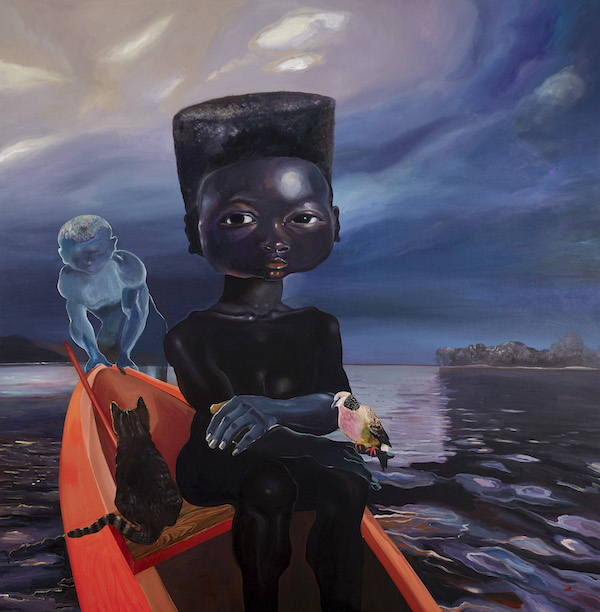 Sail Me Down Deep River, 2020 by Ndidi Emefiele

Emefiele depicts the dead using a translucent blue and pictures herself, hands turning blue, beginning a journey down the deep river. Art and religion have been vessels in which many have, through the centuries, navigated the depths of that river. While it is possible to navigate using one vessel alone, the combining of both is what these exhibitions and artists seem to advocate.

For much of human history, our most significant life events have been understood, explored and celebrated through religious frames of reference. The visual arts have created the images that have opened up that exploration and enabled our life journeys, here and beyond. The interplay between art and faith may have been underground and undervalued through much of the modern period but, as these exhibitions demonstrate, continued, and continued to enable our response to all that life entails and offers. Here are artists and exhibitions exploring the experience of being here as in heaven and looking for a world that is open to more expansive and kindlier patterns than that of our current experience.

The Everlasting Gospel Mission of Sister Gertrude Morgan, The Gallery of Everything, London, until 19 December

Ndidi Emefiele: Here as in Heaven, Rosenfeld, London, until 16 January

Read More by this journalist