Everything Damien Hirst does is controversial, from the initial shock of the new – the sensation of the YBAs – through his use of assistants, his choice of materials, the ethics of his use of animals, the plagiarism claims, the claims and counterclaims of ‘bad art,’ through to the commercialism of his overall operation. Controversy has been good for the artist. He has surfed the tide of publicity that surrounded the YBAs in ways that enabled him to stay on board, making money and gaining reputation, while producing works that sold despite dealing primarily with the taboo of death.

Death is at the heart of his work and practice

Death is at the heart of his work and practice. That has been clear from the outset, both through the works themselves and Hirst’s statements about them. Like the works or loathe them, it’s hard to deny that he’s not been transparent about his intentions and motivations. His fascination with morgues and mortuaries has been clear from the beginning and has shaped much of his work. He also wears his sources on his sleeve – particularly Francis Bacon. When it comes to the formaldehyde sculptures, none of this detracts from the power of the works. They are among the strongest and most enduring – despite preservation issues with some – of the many and varied series he has made.

His preserved animals – cows, doves, fish, pigs, sheep, and more – have been bisected, flayed, sliced into cross-sections, and combined in tableaux with knives, chain mail, meat hooks, and umbrellas. Their initial impact was made with The Physical Impossibility of Death in the Mind of Someone Living which presents the power and vigour of a tiger shark stilled and suspended. Hirst ‘wanted a shark that’s big enough to eat you and in a large enough amount of liquid so that you could imagine you were in there with it.’ Here, we encounter that same inability to comprehend the reality of death in one that brings death to many other creatures in Death Denied. Hirst is an artist for whom titles are not an afterthought but are, rather, central to the concept. With Death Denied, the shark itself has no concept of death – meaning death is denied, though real – and the method of preservation and display, while based on the reality of death, preserves the shark as an inert yet threatening presence beyond its normal timespan after death, giving it a life beyond death. 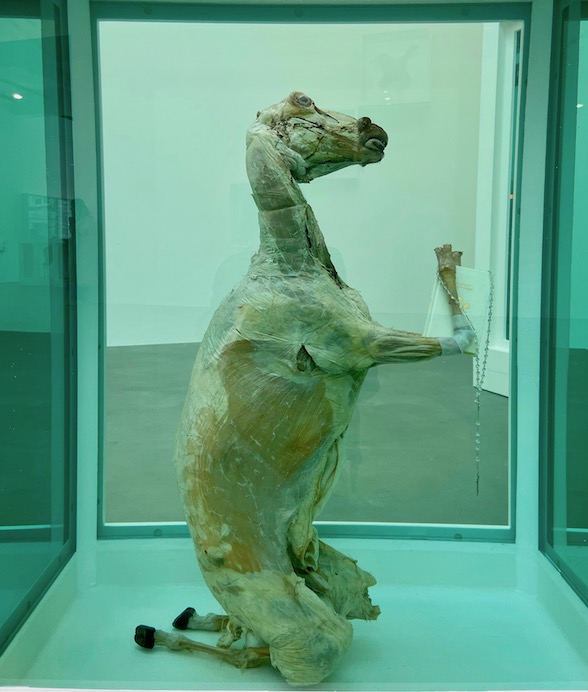 Damien Hirst, Our Father Who Art In Heaven

God Alone Knows, Our Father Who Art In Heaven, and The Incomplete Truth have been grouped to form a crucifixion tableau with the dove of the Spirit above the central crucified sheep while a shorn sheep clutching a rosary and the Book of Common Prayer between its hooves kneels in the place of the grieving Mary or John at the foot of the cross. Exhibited separately, these are works that have sometimes been called profane and which can be understood in relation to themes other than the strictly religious. God Alone Knows, which references Rembrandt and Soutine’s images of flayed oxen, can be viewed as a statement about the reality that by eating meat we continually sacrifice animals in order that we might live. Incidentally, Hirst’s unexpected challenge to our carnivorous practices can also be seen here in Shut Up and Eat Your Fucking Dinner, a vitrine that reveals the gruesome nature of butchery. Grouped together, as is the case here, these works exhibit a greatly increased sense of the hope that Christians see in the violent sacrificial death of God. Hirst once said, to Sean O’Hagan, the afterlife is a ‘phenomenal idea’. However, for me, it is the poignancy of expression on these crucified creatures that reminds of the once-for-all nature of Christ’s sacrifice, the sense that our violent actions and intentions are shown to be self-defeating – a literal dead-end – because by scapegoating and crucifying the Son of God there is nowhere else that our violent natures can possibly take us.

The Gallery notes that Hirst’s ‘titles and components suggest, these arrangements combine strikingly unexpected variations on religious iconography’ to create ‘a meditation on life and death, fact and faith.’ In an insightful review from 2008 explaining his changed opinion of Hirst’s works, Observer critic Peter Conrad suggested that like ‘Francis Bacon transforming Golgotha into an abattoir, Hirst is a religious artist for a godless age.’ Hirst explores the question of how and why we live and create when we live without the hope of eternity, of life beyond death. If death is all there is ultimately, why bother? He’s said that his work reformulates the basic worldview questions Paul Gauguin posed – Where do we come from? What are we? Where are we going? His work overall, and his Pharmacy works in particular, answer those questions in terms of viewing art as religion, over and against both science and religions as alternative belief systems.

The formaldehyde sculptures, however, are primarily about the visceral encounter with the reality of death as seen in creatures cut down yet preserved in the prime and vitality of their prior existence. The questions they pose are the oldest and most fundamental of all. They continue to resonate and echo in these spaces, these halls, and our lives.