David Hockney is, for a variety of reasons, a British National Treasure. Why? It is stunningly evident in the special exhibition of paintings done last year, which explores, sequentially, the arrival of spring unfurling over three months in his four-acre garden in rural France. What has emerged in this heartfelt series is an absorbing and interesting pattern of visual meditations on, as the title has it, the arrival of spring (Normandy 2020). Hockney has also been enthused by the iPad. Engineers from Apple refined digital brushes for the artist, and he also discovered new layers of colour and a wider spectrum of digital colour, particularly in the greens, which intrigued and delighted him, encouraging experiment.

We are given an enhanced understanding of Hockney’s professional practice – MV.

In the exhibition, a major benefit is the sense of scale, 3 metres by 3.5 metres. Otherwise, these images developed on an iPad are not particularly beguiling in these physical manifestations; in fact, in terms of his work, they are relatively flat, developed as they are from his iPad drawings. So far, technology attracts in terms of its ease in certain ways: no unpacking of manifold brushes and paints. But the final effect can be curiously deadening. Compared to much else of Hockney’s oeuvre, the actual physical reality of the iPad paintings is peculiarly anticlimactic. One of my own tests for the validity of an original work of art is how it reproduces. Here the reproductions in the catalogue are of more interest and more captivating than the paintings on the wall. Within these pages, we can follow with ease Hockney’s delighted scrutiny of the progress of the season of natural rebirth. Our appreciation is amplified by the inclusion of the artist’s illuminating conversation with the show’s curator, Edith Devaney. 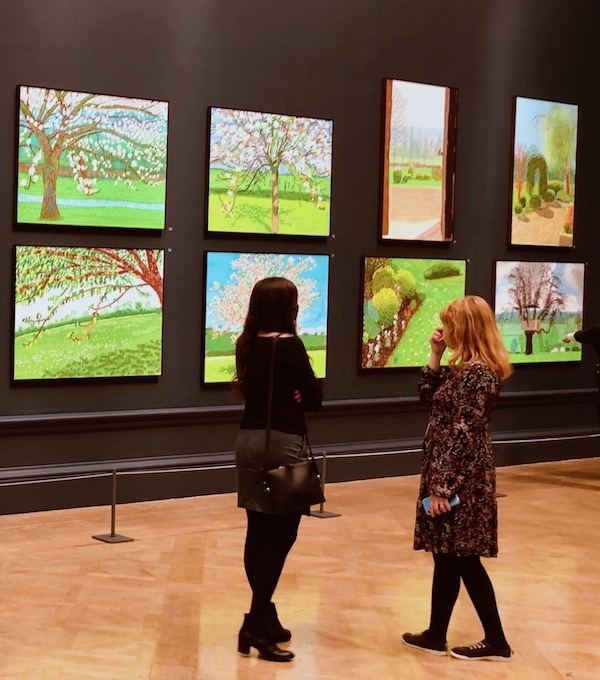 David Hockney, The Arrival of Spring

With the combination of exhibition and publication, we are given an enhanced understanding of Hockney’s professional practice. He is intensely observant and shares that, for he sees both the particular and the general; here, there is a generality in the exploration of finding a pattern in a multitude of views. He is endlessly curious. He is appreciative. He continually investigates and experiments, as here with the use of the iPad. He communicates something – a substantial something – of the delight and enjoyment he himself feels when he looks at the world around him.

The title The Arrival of Spring says it, as does the title of his new book Spring Cannot be Cancelled (Thames and Hudson £25). Martin Gayford has already collaborated with David Hockney in further elucidating the artist’s fascinating original and heartfelt ideas, notions, observations about the art of painting. Now in this latest book, Hockney’s amanuensis provides the framework and armature for Hockney’s discussion of his own painting. As with the current exhibition and its accompanying catalogue, this too indicates something of Hockney’s understandable appeal. Hockney is always not only of the moment but looking forward. His motto, as he says, is Love Life; he insists on renewal, not only because of his delight in seasonal observation but his appreciation of the cycles of change and growth. In these trying times, Hockney, in recharging his own art in such persuasive ways, conveys somehow a belief in the power of hope and the inevitability of recovery. 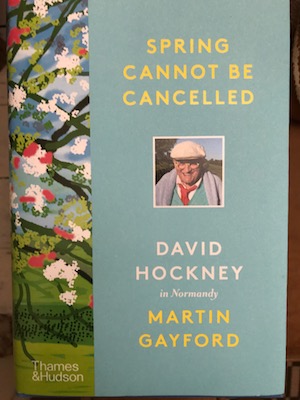