Structure tends to call to mind notions of order, stability and efficiency. It should perhaps come as no surprise that the artists featured in this exhibition most often pit structure against chaos and the ephemeral. One has the feeling that rather than having arrived at a definition, one leaves with more questions crowding around the notion of structure and the structures presented.

Outside the gallery stands a steel sculpture, Molecular Monolith, by Samuel Zealey. Its modular form recalls an atomic molecular model or even a child’s toy. However rather than the tiny scale this alludes to – for instance something that might be manipulated by the fingers – the sculpture is large and cumbersome. Made of industrial steel its physicality is far from playful. Are we presented with a final form, or has just one out of many possibilities been articulated here? The object carries with it the suggestion of growth rather than a definitive structure, a development which is potentially unbalanced.

Looking at the curator of this exhibition’s painting it becomes apparent how central the idea of structure is to his working process. Alexander Hinks makes paintings that mesh geometric gridded planes with viscous swirling pools of paint, to vertiginous effect. One is presented with a moment of flux, suggestive of both creation and destruction. Curiously, for all their contemporary abstract language, they also summon to my mind the work of John Martin. An ambivalence seems to preside as to whether the pooling paint shares an affinity with a history of gestural and process painting, or is working towards an atmospheric and illusory effect of vast space.

The latter is emphasised in a project where Hinks has handed over a digital print of his painting to the virtual reality designer Oli Lane. This is an interesting approach to collaboration and authorial control in itself. The resulting work, presented in an upper room of the gallery, shows a virtual rendering of that room with the painting presented flat on the wall. In a ‘through the looking glass’ moment one enters the dizzying vortex of the painting. Rendered in three dimensions the glacial swirls of once-liquid paint are given a secondary temporal aspect through the viewer’s animation, while the shelving planes of checkerboards, that have attempted to challenge the two-dimensionality of the canvas, surround and loom over the viewer. 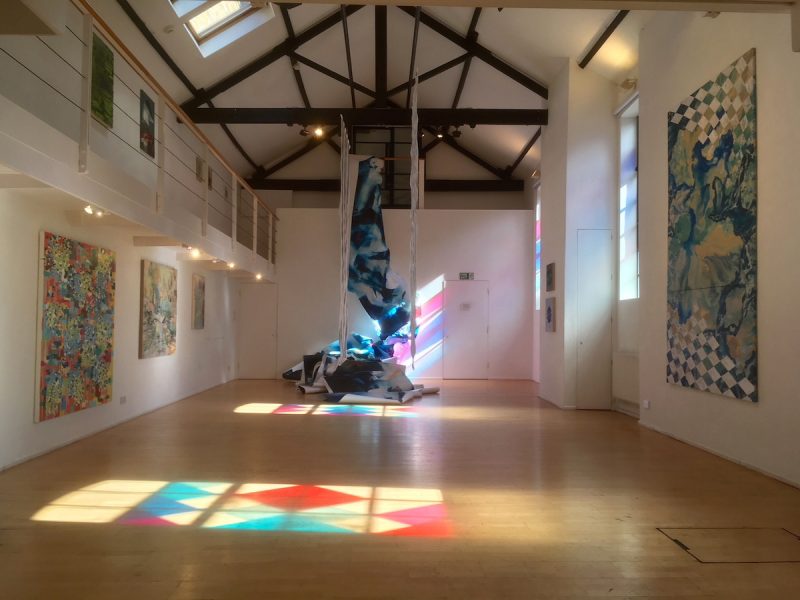 The body, or its absence, is also summoned in the largest work in the gallery by Victoria Fornieles. A length of photographic paper cascades and tumbles waterfall-like from the balcony to finally lay crumpled on the floor. The areas of printed image one can see seem barely fixed or focused. Liquid comes to mind again as photographic chemicals seem to swirl like amniotic fluid around parts of the bodies of boxers engaged in some kind of writhing. The crumpled paper also portrays structure with immediacy as the result of physical activity and flux.

The space of the gallery is directly addressed by Fiona Grady. On entering one is struck the patterns of coloured light falling across the room, the comparison to stained glass is obvious, however, any notion of a metaphysical structure seems quickly dismissed. The work seems to elegantly draw attention, with minimal means, to what is already present but often overlooked: the light that falls, without which no structure can be perceived. Grady has covered panes in the window with delicately coloured gels, the rectangles and triangles reflecting and dividing the frames of the panes of glass. This work seems to be all about taking what is given in order to perceive the structures that already exist. As the sun moves, the rectangles of light slowly reveal and render strange the gallery and its contents. There is a structure imposed but of the most ephemeral and temporal nature. At night the coloured light draws attention to the window from without, challenging us to see the ordinary rendered just uncanny enough to take note and look again.

What is given is addressed again in the installation Temporal Cut by Andrea V Wright. The artist’s intervention consists of right-angled rods spanning wall and floor, these have generated shadow lines which are fixed as painted and taped lines. These moments crowd one corner of the gallery crossing one another and stretch up to the ceiling. Rectangles of fabric hang over some of the rods. Material planes of colours yet to find a place, rendered malleable and interchangeable. This construction seems to challenge the solidity of the space it depends upon, emphasising the temporal and improvised. The making and encounter with the artwork are contingent, so structure is not absolute and remains in many ways undefined.

Colour is perhaps one of the hardest qualities to define. Christina Augustesen presents three stunningly luminous light boxes. Rectangles of colour are filtered through sheets of coloured glass, all the colours slowly shift, switched by some systematic operation the rules of which remain hidden. A perfect corollary perhaps to the inexplicable quality, effect and vibration of colour and light itself. The shifting colour relationships suggest a quite different relativistic approach when one compares them to the definitive relationships implicit in the colour-field paintings they would seem to quote.

Centrally placed in the gallery are two large sheets made by Rita Parniczky hung facing each other. The filaments of their delicate woven structure sparkle in the light from the window. The fibres seem pulled apart so that one is drawn into a close inspection of their weft and weave to discover many discordances and changes of direction. The threads remind one of electronic information highways and circulatory systems as much as of old-fashioned handicraft.

Structure continuously appears not only as the reassuringly solid building block but also as an engine. The idea recurs that this engine – be it nature’s growth as in the painting Labyrinth by Juliette Losq – could be some possibly malign and viral mechanism and is both constructive and destructive.

The paintings of Katie Pratt take their starting point in a kind of chaos, some of which still remains evident on the final canvas. However, small acts of ordering ensue: teasing clues, patterns and repetitions are highlighted. None of this activity seems to aim at an overarching strategy, rather it manages to remain allusive, tentative and at times playful.

The idea that a work of art can be structured according to rules far from a viewers ken is most evident perhaps in Luke Dowd’s contribution. Four sheets of paper collate items culled from diverse languages: gestural marks, charts, representational drawing and photography, into a kind of hermetic collage. The titles, Breakfast, Lunch, Dinner and Dinner 2, suggests a diaristic approach, a record of a day we can only partially share with the author and piece together through the fragments he presents. The inclusion of a colour chart perhaps suggesting the moment of authorial choice is handed over to the viewer.

Pen Dalton’s painting, Mothership, seems to introduce us to the work of the artist’s studio: the upper section suggesting the formation of some brightly coloured hard-edged construction, whilst the lower section consists of muddied swipes of colour reminiscent of the choices made on the artist’s palette.

The simple presentation of constructive modular units is also evident in the elegant print, Untitled (Ply/Gloss/Reversal), by Matt Calderwood. Here standardised units are stacked, their geometric precision is challenged by an intimation of temporal disorder: the units have an irregular patina as if touched by some natural corrosive process. Amongst the other cooler works in the exhibition Kasper Pincis presents prints where the constructive units are typewritten letters arranged to form pattern, they repeat towards a decorative end, divorced and seemingly at odds with their usual linguistic sense. One structure is derailed, made a nonsense of and set off to serve another purpose.

Maybe you will find a definition of structure in this exhibition. Most likely your sense of how we structure our world will be challenged and enriched.