This is the time of year when London’s grandee galleries – official and commercial – are so busy presenting us with blockbuster shows that lesser lights tend to get squeezed out, at least where publicity is concerned. Here are a couple of exhibitions on a somewhat lesser scale that it would be a pity to miss. One, at Huxley-Parlour in Swallow Street, offers the work of the American artist Donald Sultan, one of the stars of the return to painting (as opposed to other forms of artistic expression) that took place in American art in the 1980s. Julian Schnabel, who had his first New York solo at Mary Boone in 1979, is another member of the same generation. Schnabel, to declining acclaim, still exhibits as a painter but has swerved off track and is now perhaps better known as a film-maker. Sultan has continued to paint.

His show here in London offers just seventeen works but spans the whole of his career. The earliest work on view dates from 1977, and the most recent from April of this year. As the excellent catalogue for the show points out, some of his earlier paintings, which rejected the Minimalism fashionable at the time, resonate with the feeling of gloom that followed the failure of America’s catastrophic military intervention in Vietnam. The paintings that greet you as you come into the gallery reflect this mood. They are dark works, made in the mid-1980s. One features the devastation caused by a forest fire. Another is an image of railway lines, going nowhere.

The mood lightens considerably when you go downstairs. There you are greeted by a large, very decorative painting called Fifteen Oranges, which shows you exactly that: fifteen simplified bright orange fruit, dangling on a white background amid equally simplified leaves. The oranges have no stems. They float, decoratively detached. In this sense, they are not materially present.

It is, of course, easy to say that, without the example of Matisse, this composition would never have come into existence. Yet, while it is obviously a child of Matisse, it isn’t an imitation. It shows that it is still possible to make a shamelessly decorative painting and get away with it. This decorative flair asserts itself even when Sultan eschews colour, as he does in a couple of drawings of gigantic Black Lemons, in charcoal on paper. Their energetic forms, lacking interior detail, jostle against the edges of the surface on which they have been placed, and impatiently overlap its boundaries. They proclaim an old artistic truth – ‘less is more’ – but do so in a thoroughly contemporary way. 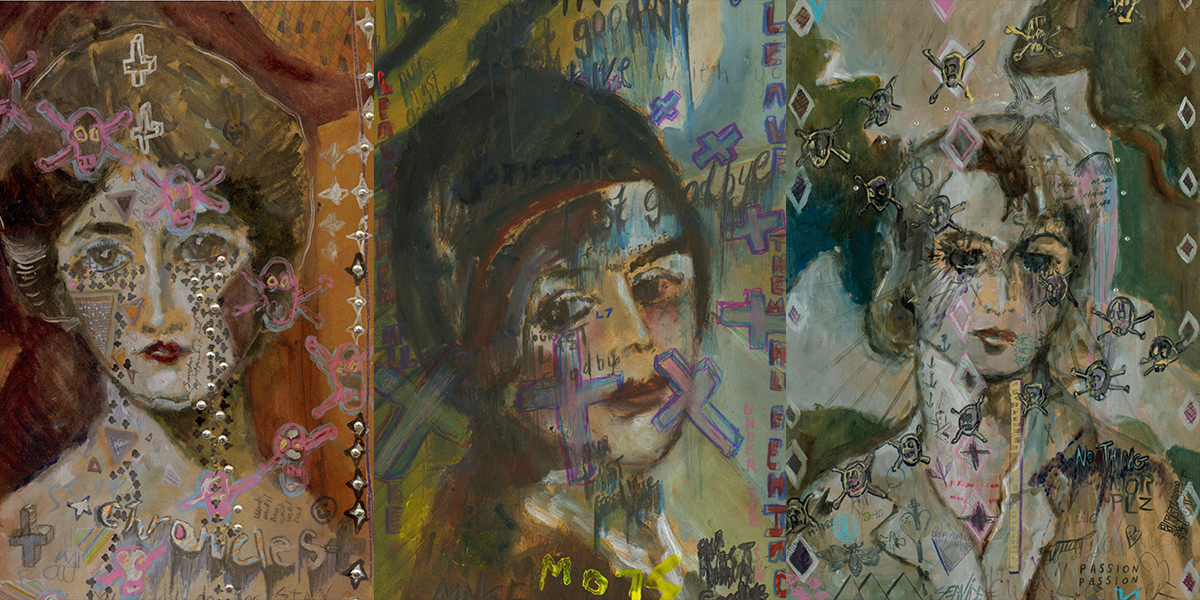 At Charlie Smith London in Shoreditch, there is a show of work by Sam Jackson, a British artist whom the gallery has long represented. None of the paintings are large. The majority are very small – no larger than the pages of a quarto book. All of the works represent glamorised young women, represented head-and-shoulders. They somehow echo the glamour photographs of the 1920s and 1930s, without being in any sense photographic. The images are often scribbled over with graffiti, usually but not always forming words. The exhibition is called Chronicles, and in a brief catalogue note the artist offers the following: “If what was once real is now imagined, how do I remember an autobiography of stories unresolved?”

In a catalogue essay his fellow artist Graham Crowley has this to say:
“Ultimately, these paintings are lamentations for the passing of youth, the ineluctable passing of time and the attendant weight of that anxiety. A way perhaps, of assuaging the creeping and unpleasant suspicion that our best years may be behind us? The familiar consistently rendered unfamiliar by the sheer density of life?”

This note of melancholy, differently expressed, also echoes in some parts of the Donald Sultan show and is acknowledged by its title Dark Objects. It doesn’t escape one’s notice that both of these exhibitions present the work of male artists. Maybe if the artists were female, the note would be more cheerful.