What is this ‘other world’ Alexander Hinks is drawn to and asks that we be drawn into?

His current exhibition at ‘The Cello Factory’ spans some four years of art-making. The paintings introduce themselves as unabashedly interested in transcendence, possibly unfashionable given an increasingly materialistic contemporary background.

On entering the gallery, one could be struck initially by the dominant blue colouration. This is a colour he chooses for its synthetic nature: it has corollaries in nature, and these are sea and sky, both of which carry a sense of vastness. He chooses them, he says, for their illusory nature, since sea or sky are not blue, only appear so. The blue colour is, he feels, synthetic. Likewise, it is important that the paint surface seems untouched by the human hand: is organised according to process and pattern thus remaining a phenomena or stimulus.

The sense of expansive space is not limited to the use of colour: it is evident in the desire to expand the bounds of the painted rectangle physically, whether by stacking paintings one upon another or fracturing them into rectangles processioning across the gallery walls. Arcing curves sweep away off the canvas, little rectangles carrying off moments of chaos out over the wall, alluding to a space which could unfurl into various infinities. 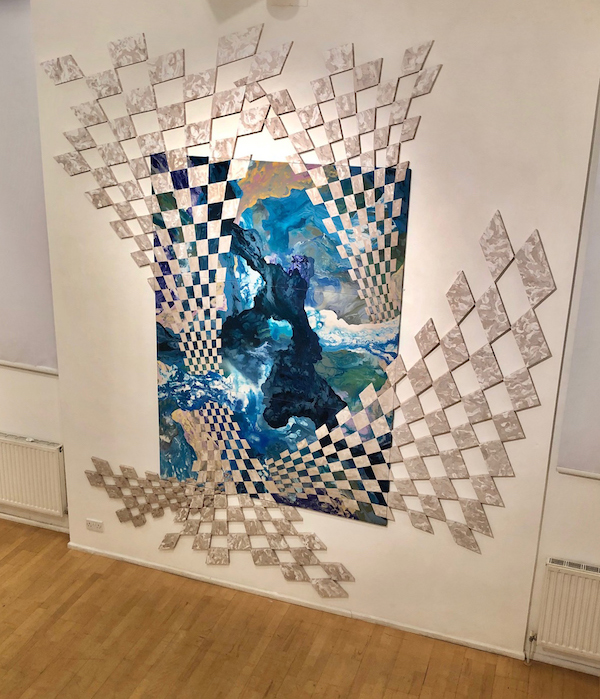 Two works are presented which suggest an expansion of these themes into three dimensional and virtual digital space. In the main gallery strings of jute are stretched taut from floor to ceiling uncoiling loosely onto the floor. Striations intersect and form shifting screens as one moves around. These repeated sculptural units have been placed to partially obscure one of the largest paintings and seem to echo the patterning of the painting.

In one corner of an upper room, a number of untreated bamboo poles have been strung up so that they jut dramatically out into the space of the room. The sole illumination comes from a projected image, where it seems a camera tracks through the space of a painting as reimagined in ‘Virtual Reality’. The image appears to fold into the corner of the room, while the shadows cast by the poles seem to become independent. Here the contrast between illusory space and physicality seems at its most heightened.

An interest in technological transformation is again evident in two small digital prints. The originals have been miniaturised, resulting in an increasingly even and crisp impersonal surface.

The desire to free or extend the painted rectangle can also be seen in the use of languages which may appear to sit uneasily together. This is not the art of synthesis, rather the clash of opposites. His avowed aim is to destabilise the viewer. The highly tense colouration and rhythmic grids suggest psychedelia and reference pulp sci-fi as much as a faithful satellite view of our planet’s beleaguered terrain. Nonetheless, the imposed grids which drift in and out of focus could also be mapping the beauty of far off gaseous galaxies. The aqueous flow of colour seems to seek no resolution as it disappears through imagined chasms only to well up from some other vortex then to dissolve into white light or clog into an earthy richness.

These uneasy clashes, though carefully performed, speak of the all too human desire for both order and escape.