2019 is the 80th anniversary of the beginning of World War II, which not only led to almost countless millions of deaths but waves of refugees seeking sanctuary where they could, beginning in the mid-1930s. Brave New Visions, this special exhibition at Sotheby’s George Street galleries curated by Sue Grayson Ford, is a tell and show of the ways in which Britain’s insular art world was expanded and transformed by newcomers, celebrating and commemorating the cultural richness the mid-20th century forced migration brought to this country.

As both catalysts and innovators, the British art world was transformed

In the law of unintended consequences, Hitler’s gifts to the London art world ranks as among the more unexpected. Hounded by increasing restrictions, censorship, attacks on property and livelihoods, and in fear for their very lives, artists, art historians, collectors, gallerists and publishers found sanctuary and new lives in Britain. Unable to work, as their efforts were considered decadent, censored, forbidden, and even destroyed, persecuted because many were Jews, or did not subscribe to societal norms scores if not hundreds of remarkable, talented and energetic of the most creative people managed to escape, mostly to London. Leaving all they had before, they forged new lives, learning a new language and a new culture. In the process, as both catalysts and innovators, the British art world was transformed, its effects still felt today.

Those arrivals from the continental art world who came to Britain, to an alien culture suspicious in many ways of cultural innovation, brought, perforce, fresh eyes. The arrival from the mid-1930s, through the war and in the immediate post-war period of those forced to flee from Nazi Germany, Austria and the neighbouring countries to the east profoundly affected British culture. For the art world, you did not have to prove your qualifications, as – say – doctors and teachers did: you could just act if given the talent, energy and access to people who would help you both as clients and with perhaps financial backing.

The publishing companies of Thames & Hudson, Phaidon, the galleries Gimpel Fils, Annely Juda Fine Art, the millions and millions of copies sold worldwide of E H Gombrich’s The Story of Art, careers of artists from Gillian Ayres to Francis Bacon, Oskar Kokoschka and Kurt Schwitters are just a handful of the legacies and ramifications as a result of the incomers. 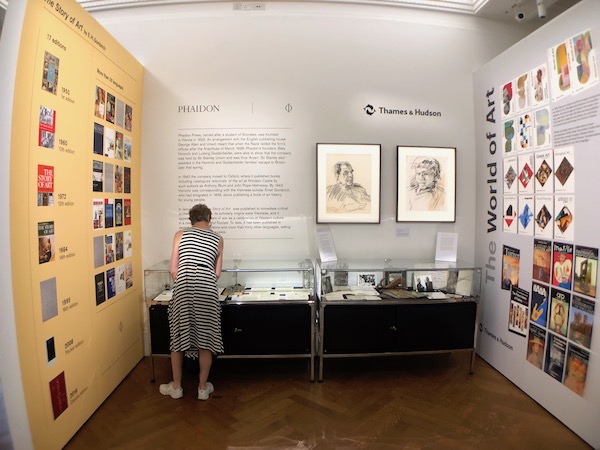 It is not too fanciful to suggest that the natives, from academics to artists, were energised by the arrivals of such a variety of new outlooks into what had become in many ways increasingly insular communities.

To suggest what happened from the 1930s through the early post-war period, one spacious exhibition space is filled with a compilation of some 40 works of art, from sculptures by Barbara Hepworth, Eduardo Paolozzi and Anthony Caro to paintings by Frank Auerbach, Gillian Ayres and L S Lowry to works on paper by Kandinsky, George Grosz, David Hockney, Henry Moore, and Lucian Freud and many others. What is on the walls is amplified by a display of catalogues, letters, books and other ephemera to tell a marvellous story.

It is a cliché, but nevertheless accurate, that visually speaking Britain has for much of its history been a bit buttoned-up visually. Victorians were often obsessed with telling moral stories and even the Pre-Raphaelites were burdened by their theories of what art ought to be. There were remarkable moments, of course, predicated by individuals – say – the irrepressibility of Turner, however much of his time a true original, and he only achieved an international reputation in the post-war period when taken up by British art historians and galleries. It is worth remembering that it took modern Britain a long time to make Turner top of the artistic pantheon: a famous even infamous Royal Academician. It was not until 1974 that the RA gave any English artist a retrospective occupying the piano nobile at Burlington House, and that was Turner, leading onto an equally successful showing of his rival, Constable. And much of Turner’s bequest of his own work to the nation only finally achieved a permanent home when Tate Britain’s Sir James Stirling designed the Clore Gallery which opened in 1987.

It is in fact only in the post-war period that much British art has had an international showing and reputation, and much of that is due to the opening out of visual horizons by the influx of the members of the forced immigrants who came some 80+ years ago: gifted, hard-working, even obsessed, who brought wide-open eyes sharpened perhaps by adversity as well as a high degree of skill in their chosen professions. No longer able to practice their callings on the continent, their imagination, and insight was brought to bear on the culture of their new home, even if that home was chosen for reasons of survival above all.

Thus the roll call of British artists who were first significantly shown in the galleries founded by refugees and immigrants, and are represented here to reveal the richness that was first revealed by the new galleries: Henry Moore to Gillian Ayres, Francis Bacon, Barbara Hepworth, Ben Nicholson, Alan Davie, Antony Caro, William Turnbull, among others.

Of course, some artists were themselves migrants, and they too were first shown in the new wave of post-war galleries: Frank Auerbach and Lucian Freud who came as children in the 1930s. Freud came with his family, but the Berliner Frank Auerbach came alone aged 7, his parents murdered in a concentration camp. 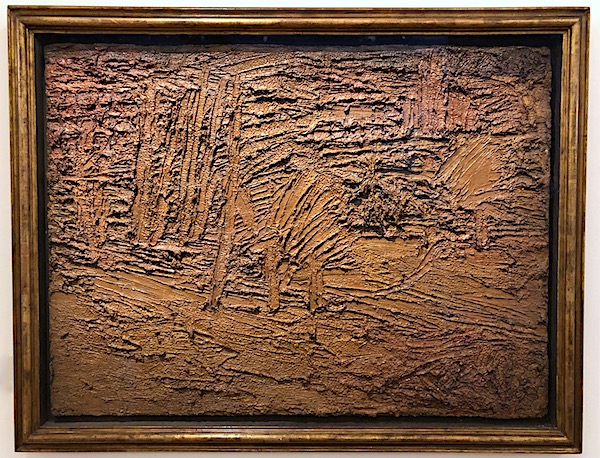 The Austrian artist Oskar Kokoschka’s (1996-1980) pencil portraits of Thomas Neurath, b 1940, the son of the founder of Thames & Hudson, Walter Neurath, is a visible sign of the connections within the influx of new Britons. Thames & Hudson’s invention of the inexpensive brilliant World of Art series, texts wrapped around illustrations, must have done more to vividly introduce world visual culture to readers – and students – everywhere. The most sardonic and memorable newspaper cartoonist, Vicky (1913-1966) who memorialised the politics of his age was the Berliner Victor Weisz, who fled Germany in 1935; witty, savage, truthful, the sorrows of the world must have been impossible to handle, and he committed suicide in his early fifties. Here on view is a 1941 dramatically heroic cartoon published in the News Chronicle praising the heroism of the Russians in the Siege of Leningrad.

Even more, the galleries brought new aspects of 20th-century art to Britain: the avant-garde Russians at Annely Juda, as well as their long connection to Christo; expressionism in many guises at Marlborough and at Fischer Fine Art; a passion for folk art at Crane Kalman. At galleries no longer extant, Erica Brausen at the Hanover showed Francis Bacon. The gaze was expansive bringing the avant-garde from across the Channel and recognising the avant-garde in Britain.

And something was set alight, set in motion. It is a commonplace now to suggest that London is now an international capital of world art, intellectually and financially, from its auction houses to its museums, commercial galleries, publishing houses, and communities of artists. We owe much of that to those whose stories are shown in this fascinating anthology. 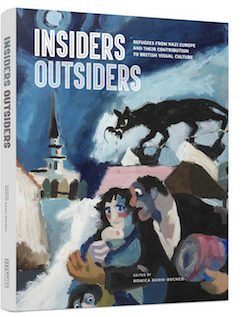 This lavishly illustrated book is an important epitaph to the contribution that immigrant artists made to British Modernism. “At a time when the issue of immigration is much debated, the book serves as a reminder of the significance of cultural cross-fertilization and of the deep, long-lasting and wide-ranging contribution that refugees make to British life.”

“The volume is an essential contribution to understanding the enrichment these refugees – whether passing through or settling – brought to Britain as their influence and legacy continues to reverberate in the twenty-first century.” – Marina Vaizey, The Burlington Magazine