I found this exhibition thought-provoking. It challenges the way we view the world and what we are being taught to believe. It encourages you to think about the possibilities of changing the limitations and constrictions imposed upon us, through a contrived system of power and incivility that has been spoon-fed to us throughout our lives. When you see this exhibition, you realise what is missing from society, that many of us crave, not to be part of – a prescribed set of rules in order to reach success and being perpetually overpowered by a system governed by ‘certain people’ we don’t know. If you have wanted to break away, this exhibition will help you.

A sensory experience, the exhibition is full of colour, texture and digital harmonies

A sensory experience, the exhibition is full of colour, texture and digital harmonies with the thought-provoking subject matter. It will draw you into different worlds, exploring the prospect of a better world through the animation and artwork of female and non-binary artists. All the artists allow us to question our current belief systems, the rules and the way we have been taught to assess and understand the world. There is a lovely feeling of hope in this exhibition. I felt for the first time in a very long time as if austerity and greyness were being peeled away, reminding me of something that we all once had but has somehow vanished from society. It takes you back and forwards to a better place, challenging our so-called fixed system of beliefs that has been drummed into us and which can have a forceful effect on our sense of reality.

FACT – You Feel Me – Photo ©-Rob-Battersby

“Artist Phoebe Collings – James explores poetics and the “emotional detritus of violence through the mediums of ceramics, video and sound”. Much of her work explores how and why we experience violence. Who are the perpetrators and how does it make us feel? She brings together three works that suggest familiar symbols and rituals. OkoKok is a collection of fragile plaster ruins that evoke the image of a hood or spectre or possibly even a symbol of the KKK. These sculptures have become fragile and destroyed with time. There is a sombre and vulnerable and a distinct feeling of disregard for these pieces. Her work’ Detritus of Devotional Memoribillia’, is a series of ceramic scrolls of creatures, limbs, dates and codes. There was a ritualistic and beautiful sensory sacredness to these ceramic tiles. Her film, Mother tongue, Mother Master, a video of ringing bells on net stretched across the artists face becomes a form of ceremonial accompaniment to the three lives as a whole, “allowing us to retrace time, allowing us to reflect on the subconscious implications behind objects, actions, heirlooms and cultures.”

Violence is addressed again in the installation video game, Red Dead Redemption (which has been widely shared on YouTube). The installation Suffragette by Megan Broadmeadow draws attention to the Suffragette, Emmeline Pankhurst, within the video game who is brutally attacked and murdered by the cowboy in the game. Megan explores immersive and our complex relationships to objects, investigating how objects and environments affect our subconscious. The film draws attention to accountability and how video games and their actions seem to support the system and the law. However, not for long. The cowboy in the video game will be taken to trial in real life as part of this art installation. We question whether the video game should be viewed as a real crime or a game? Should people who create these abuse systems on games be held accountable? It’s an interesting question. “what would happen if we took this case to trial in real life and is it our responsibility to do so? Watching the film on YouTube will offer you insight into just how violent, and abusive video games have become. The box is there with the installation for you to cast your vote.

As you walk further on, you will come to Rebecca Allen’s Film, ‘The Observer’ You will discover that this alien world is like no other you have ever seen. It’s a tranquil, calm world that you experience and then it becomes apparent how the alien creatures interact with each other. This is a. non-violent world that questions our systems of belief that dictate how we make our decisions such as rules in education, law, politics and technology. This virtual world follows new rules of behaviour. ‘The Observer is a moving painting built using Emergence, a computer system that Allen developed in the late 1990s able to generate artificial life a virtual world of digital landscapes.” The creatures interact with each other and the environment making decisions based upon her rules. This is a perfect digital landscape challenging violence and mainstream technology worlds. 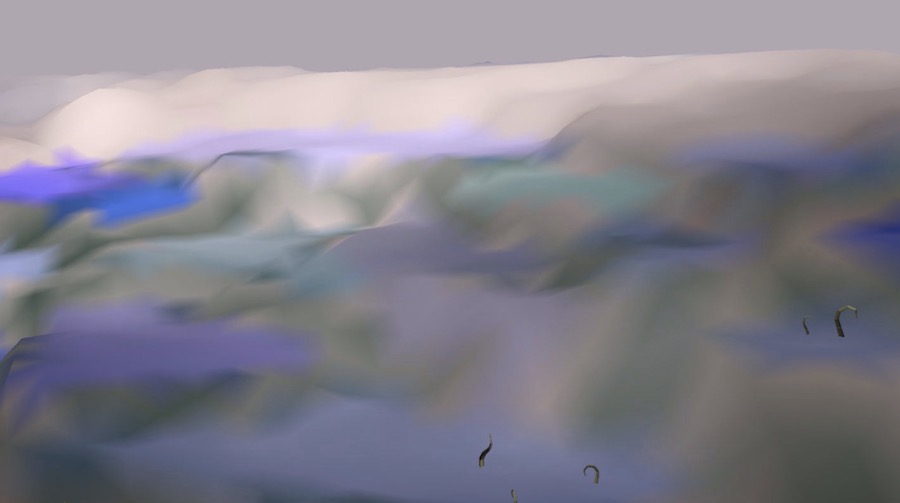 I really enjoyed watching the digital landscape in this film. It was so calming and beautiful and somewhat haunting. We are led through a vast distance of clouds and land, beautiful serene pink and blue softness. There is a sense of suspense. The alien creature tentacles emerge from the ground and they’re friendly! They appear to be harmless creatures. This does make you question the way we have been taught to perceive the idea of aliens and the unknown. They are playing. There is no violence. You would be alarmed, but not terrified of these creatures if you were there. Known for her research in the field of digital art starting in the 1970s, Rebecca Allen began to compose works for computer imaging including still graphics, animation, television logos, music videos, video games, large-scale performance work, artificial life systems, and interactive installations. She is a pioneer in the field of computer art, with her work addressing the humanising of technology.

The exhibition continues. In the work of Brandon Covington Sam – Sumana. A multimedia artist and producer. Their work interrogates matters related to currency, transience, narrative structure and system metabolism. We are asked the question of who owns our stories and experiences. Who decides how our lives are portrayed to the rest of society? And if we aren’t in control of our own narratives, what does it mean for our own humanity? This is a fundamental question. Only you yourself own your story. The installation Life is… Grand II: Anatomy of Apology (2019) invites us to consider these questions within the context of Mesha Mesh’s e-book, Jus’ wanna Leave This Ni**a. The story centres around a character called Lyric who is struggling in her marriage to an abusive womaniser.

This is written to touch women who have experienced domestic violence, to recognise an alternative path to a story that often has an all too familiar ending. Covington Sam – Sumana believes that some of the most daring interventions happen in the world of literary fiction, where female and non-binary writers spin narratives depicting themselves thriving, loving and engineering their own freedoms in the face of adversity. On the wall next to the installation, there are four framed statements containing suggestions for how to effectively apologise. The artwork states that apologies are one of our most wonderful social technologies and Covington Sam – Sumana portrays this apology as a holistic ritual, one of healing and one that will open up new doors for healing and learning.

To continue, walk upstairs to Gallery 2. Anna Bunting-Branch, inspired by fan fiction, explores feminist visions and revisions of history. She remixes theoretical texts, science-fiction stories and archival material to create new narratives. Her work The Linguists (2017) invites us to consider why language is created, how it is shared and understood. It’s an interesting question of how language does, in many ways, exclude women. The film suggests how female bodies are linked to language sexually and how if another language for women were used, it would change the way people interact with one another. The artist experiments with a language called Laadan that identifies with women In her film The Linguists. We want to speak, but we can’t. The linguists say: “we will help you”.

This incredible animation film conveys this idea very well with its feminist and multicultural angle of language. Walk further to her next installation Warm Worlds and Otherwise (2018 – 19), a collaboration with Aliyah Hussain. Inspired by a book of short stories by James Tiptree, it transports us to an alternative universe coming to life through painting, digital animation and virtual reality. The work draws inspiration from a wide range of fictional and non-fictional sources. This project engages painting, digital animation and virtual reality to explore ideas of world-building, embodied perception and technologies of representation Central to the project is META, an experimental 360-degree animation. As the viewer is transported between environments – from an unknown planet to a restaurant orbiting in space and beyond – we inhabit the bodies of different human and non-human characters in the narrative.

Turn around on your seat and experience the entire virtual scene that surrounds you. This is a wonderful Virtual Reality experience Inspired by feminism and science fiction exploring the worlds we create to understand the unique perspectives of other conscious beings. Overall, this is a fascinating exhibition involving multimedia art. Not to be missed!

Artists: Rebecca Allen, Megan Broadmeadow, Anna Bunting-Branch, Phoebe Collings-James, Brandon Covington Sam – Sumana, Aliyah Hussain and Salma Noor. … you feel me_ invites you to an alternative world, a place without division and a space where we can heal. … Presented by Curator in Residence, Helen Starr.