If there is one image that Bacon made his own above any other, it is the mouth contorted in a scream or grimace. It is not Munch’s shrill scream of terror. Bacon’s mouth is cavernous, the lips curled in a snarl to reveal rows of potentially castrating teeth. Sometimes it is a gaping black hole, at other times a fleshy orifice. It is always sexual and often animalistic and dangerous.

“Birth, Copulation and Death. That’s all the facts when you come down to brass tacks. Birth, copulation and death.” T.S. Eliot  Sweeney Agonistes

In this exhibition at the Royal Academy, brilliantly curated by the art historian Michael Peppiatt, the first image the viewer encounters is Bacon’s monochromatic head I painted in 1948 in oil and tempera on board. Thin white perspectival lines suggest an enclosed space. A dock? A prison? A figure dominates, its thick white neck poking from a torn garment. The top of its head is missing. Its face seems to have been torn off and is hanging, flapping almost, like a ripped mask, the mouth open to reveal an array of teeth. But these are not human teeth – there is a huge, bared incisor on display – and yet the shape of the figure is human. The pink lips appear smeared with froth or saliva. It’s a terrifying, ambiguous image. Who or what is this? Man or beast? 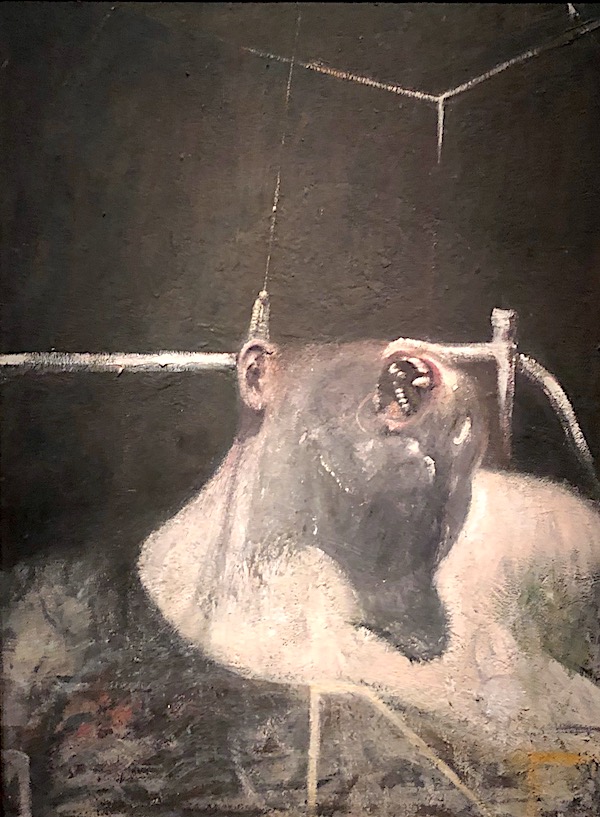 Born in 1909 to English parents in Dublin, the second of five children, Francis Bacon not only suffered asthma as a child but was beaten and abused by his sadistic, racehorse trainer father for whom he came to have inappropriate feelings. He also lived through some of the most turbulent events in history. The Irish Easter Rising. The First World War with its millions of dead in the mud of the trenches. The rise of Fascism and subsequent death camps. These were the backdrop that turned this one-time interior designer into a prophet of existential doom. As a young man, Hitler and Mussolini barked their speeches into microphones, their mouths contorted with hatred. While in 1925, the film director Sergei Eisenstein made an iconic film, the Battleship Potemkin, about the Russian Revolution where, in one of the most famous cinematographic scenes of all time, a screaming nanny, the glass of her Penz-Nez shattered into her bleeding eye emits, what Bacon described, as ‘a human cry’ from the black cavern of her mouth. The mouth, fringed with teeth, returns again in numerous other images throughout this exhibition – in the centre of a ghostly hybrid/human owl in Fragment of a Crucifixion, 1950, and the contorted and distorted figure of a ‘Fury,’ 1944 arched in an orgasmic scream gushing red roses from its throat, or in the studies of caged Baboons and Chimpanzees rattling their cages. 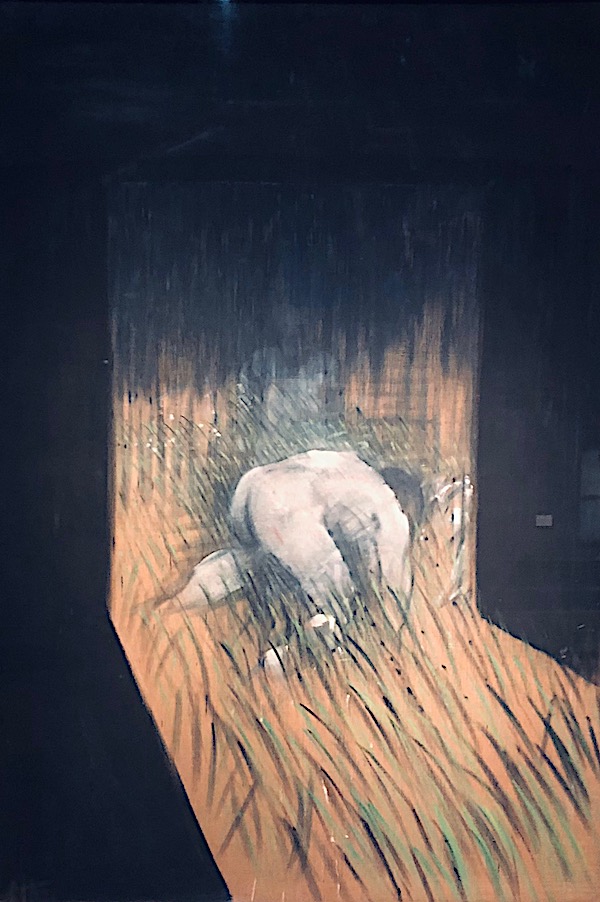 As a young gay man in London, when homosexuality was illegal, Bacon, conditioned to the sexual masochism instilled by his brutal father, explored the gay haunts of Soho. Rough sex was to his taste. Bodies were disposable. Muscles, flesh and available orifices were all that mattered. After leaving Ireland, he’d spent time in Paris and seen the meat markets and abattoirs, also discovering the visceral, fleshy paintings of Soutine. Like the French philosopher and theoretician Georges Bataille, Bacon came to explore the duality within man’s nature between the ‘irrational’ sacred and the ‘rational’ profane, that dichotomy of terror and awe within the human psyche. For Bataille, the ‘scared’ encapsulated ‘inner experience’ that disrupted order and incited both disgust and veneration. Nowhere is this more clearly demonstrated than in Bacon’s 1960 painting Pope and Chimpanzee, where the gesticulating animal morphs into a pontiff with an ape-like face. Here, the normally subsumed animal nature of man hidden beneath the niceties of a red clerical gown is made visible. Bacon had been fascinated by seeing wild animals hunting since visiting, in 1951, his mother and sisters who had moved to South Africa. He haunted the streets of Soho like a predictor, the low-life drinking dens, the gambling salons, the queer pubs. Man Kneeling in Grass, 1952, a nude male, buttocks raised in an inviting sodomistic pose, takes on the quality of prey camouflaged by the zebra patterns of the savannah scrub and recalls William Blake’s mad and defeated Nebuchadnezzar crawling naked on his hands and knees, his wild beard dragging along the ground.

Myth played a central role in Bacon’s iconography. He incorporated echoes of the art and literature of the ancient world into his allusive imagery, such as his Triptych Inspired by the Oresteia of Aeschylus, 1981 with its blood-soaked reverberations, and the Second Version of Triptych, 1944. He once admitted that ‘The Furies’ often visited him. These vengeful goddesses seemed to function as harbingers of guilt, malevolence and destruction in his godless world. But Bacon never really explained his use of imagery and, like the great Egyptian art he so admired, held precise meanings close with the enigma of the sphinx.

Movement was another thing that fascinated him. Dogs, men having sex and the stark image of a Paralytic Child Walking on all Fours, 1961 were taken from Human and Animal Locomotion, the photographic studies made by Eadweard Muybridge in the 19th century. In Bacon’s hands, Muybridge’s wrestlers become men copulating, underlining Bacon’s penchant for violent sex. By the 1960s, his preoccupation with the body in motion had led to increasing distortions in the figures that he painted, including his few female studies of Henrietta Moraes. Among the most disturbing is the portrait of his lover George Dyer Crouching – he died of an overdose on the toilet two days before the opening of Bacon’s triumphant and career-making retrospective at the Grand Palais – standing on what looks like a diving board, enclosed in some strange circular pit like an animal waiting to be fed.

Towards the end of his life, Bacon became fascinated – like his hero Picasso had been – with the bullfight. In his late 1987 Triptych, he shows the wounded and bandaged legs of a nude matador, the wounds raw as sexual orifices, the bull’s horns a final brutal phallic symbol. The bull was to be the subject of his final painting. Unusually painted in monochrome, with dust added from the studio floor, the animal seems to be dissolving into the dark, merging with the void behind the white walls as it, finally, loses its power.

Beyond the date palm

and ribbon of hot sand,

the electric zip of blue sea

and strip of burning highway

where cars black as ants

flow liquid in the heat,

colour from the concrete boulevard,

and a patch of back-street dirt

in its own shadow,

chasing its own tail.

Flea ridden, the stink of gutter

clotted in its fetid fur.

It is, behind its black snout,

behind its helmet of bone

and knowledge of the human,

returning to what is

to what is dangerous.

Swimming to Albania, her fourth poetry collection is available from: www.salmonpoetry.com