Frida Kahlo’s life is so interwoven with her art that there is little separation. Her biography is well-known, and so is her image. The brightly dressed artist in traditional Mexican clothes with her prominent monobrow. The pain and suffering she endured first through childhood polio and subsequently through a tram crash are well documented. The time she spent bedridden, the numerous operations she underwent, the orthopaedic corsets she had to wear, her turbulent marriage to muralist Diego Rivera, her friendship with Leon Trotsky. The Oscar-winning 2002 film Frida in which Selma Hayek played the title character with sympathy and credibility aided her fame. As a result, she has achieved what can only be described as cult status. The public is drawn to her colourful personality and vulnerability, an exotic creature with a troubled life who has become a feminist symbol. Kahlo’s paintings, often self-portraits, either depict her in bed or staring out at the viewer with her distinctive monobrow and severe expression. 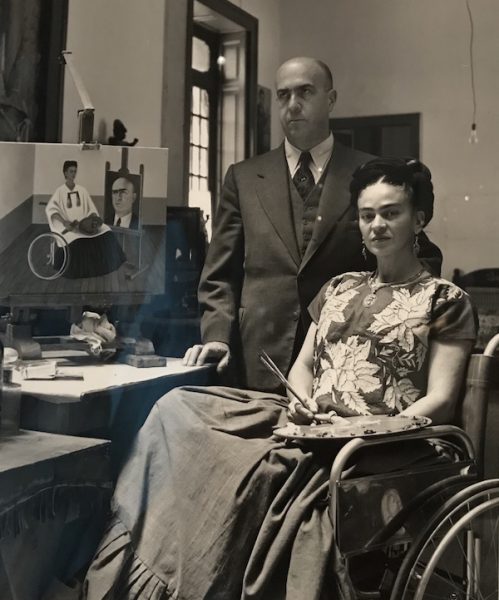 After Frida Kahlo died in 1954, her husband Diego Rivera shut her belongings in a bathroom at their Mexico City home known as The Blue House, now a museum. Rivera demanded that the room stay locked until 15 years after his death. However, the room was only eventually opened in 2004. 6,000 photographs, 22,000 documents and 300 of Kahlo’s personal items including medicines, orthopaedic devices, clothing, jewellery and accessories were found. 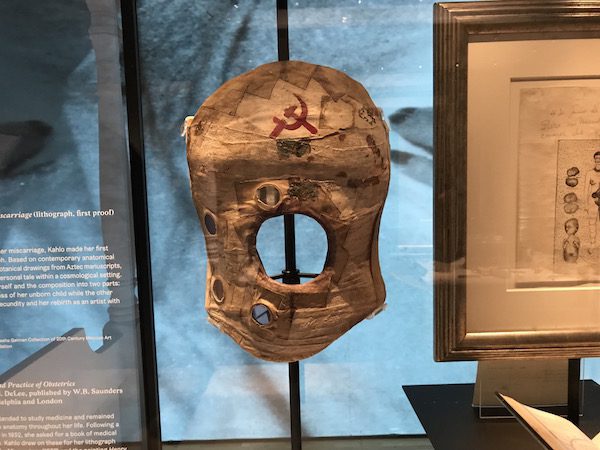 Over 200 of these objects are now on display at the V&A. Frida Kahlo: Making Her Self Up is the first exhibition outside of Mexico to display her clothes and intimate possessions. There is something quite ghoulish about the display. Yes, Kahlo was an artist who used her life and suffering as inspiration for her work – painting her miscarriage, her broken heart, her declining body but here we are being offered unparalleled insight into Kahlo’s life. Kahlo the fashion icon, celebrity and cult figure is on show here.

On Display are the makeup from her favourite lipstick, the red nail varnish and the eyebrow pencil she used to emphasise that signature monobrow, her prosthetic leg, stacked shoes, medicine bottles, spine braces and costumes. She has fascinated the public for decades and the exhibition will ensure that this fascination continues allowing them to devour every aspect of her life. Kahlo as the rock star artist. 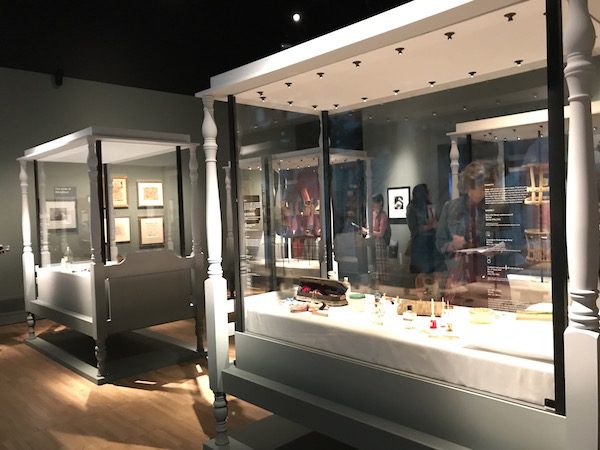 Through photographs, we follow Kahlo from her early years tracing her background, born to a German photographer father and a Mexican mother of Spanish and Indian descent, through her contraction of polio aged just six and later tram accident to her communist associations, meeting Diego Rivera and their stormy relationship. There is video footage adding to the rounded picture of her life including life set around the artistic hub at the couple’s home, The Blue House. 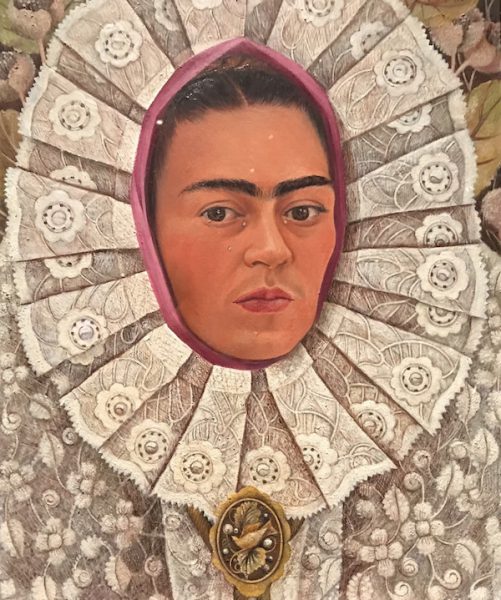 As a teenager, Kahlo had dressed in unconventional ways to express her individuality and to disguise her damaged leg. During her 20s she embraced traditional Mexican dress that she then wore for the rest of her life. There are showcases filled with mannequins wearing her colourful indigenous outfits. For the first time, these are exhibited alongside self-portraits and photographs of Kahlo wearing these outfits. One example is the replandor, a lace headdress worn by the women of the Isthmus of Tehuantepec in Oaxaca, southern Mexico paired with a self-portrait of Kahlo wearing it. Kahlo notably identified with the culture and clothing of these women with their richly embroidered blouses, floor-length skirts and woven shawls. The paintings take second place to her belongings, reduced to a sideshow. It is all about Frida and her admirers can’t get enough of her. However, this combining of life, art and style is what the V&A does best.