“Can there be a more hypnotic colour than black?” is a question that impulsively arises when we encounter a work by Gabriel J. Shuldiner, who has been unceasingly employing this achromatic colour in his unconventional paintings for the past decade and a half. Indeed, the evocative paintings of Shuldiner can be read as relief sculptures, where surface and space are in arresting dialogue. In many instances, the flatness of the painting’s surface has been entirely disrupted and reformulated through chaotic forms that emphatically protrude and recede. In other instances, the quadrilateral frame has been thoroughly contravened through formlessness. Often, both frame and surface have been rendered shapeless, as if to implode the inadequate lexical term “black” and majestically transcend its semantic value through ever-changing achromatic phenomena revealed upon iridescent, cambered bodies mounted on walls. 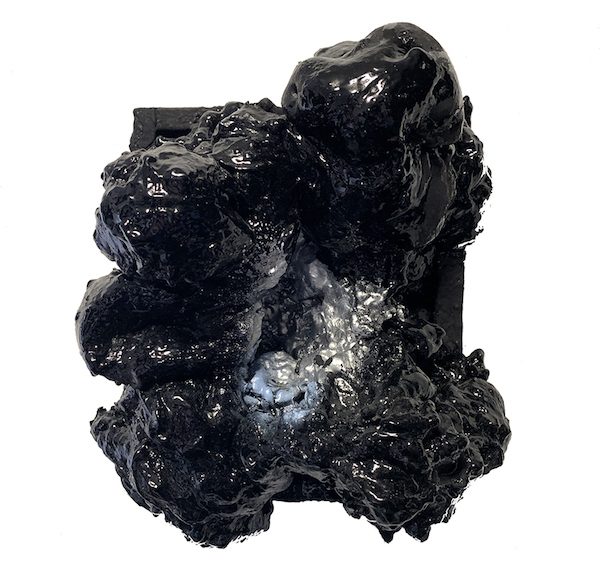 As the spectator confronts a given work by Shuldiner and attempts to perceive the degree of its inherent blackness versus its optically reformulated colouration due to illumination, reflection, shade and shadow, the gleaming surfaces frequently convey the impression of innumerable values of black, grey, silver and white that alter ceaselessly with the viewer’s shift of vantage point and due to profuse reflectivity. Occasional bursts of neon colour, hue, tint, tone or shade furthermore startle the observer and conjure up the epistemology of darkness, pure luminosity, chromatics, colour perception and physiological optics.[1]

In the recent solo exhibition enigmatically titled “Translucent Saturation” held at David Richard Gallery in New York, three medium-scale and thirty-seven small-scale works were presented with an overall formalistic coherence determined by Shuldiner’s nonpareil handling of black. Apart from half a dozen small paintings that were rectangular, somewhat flat and matt, the exhibition revealed nonrepresentation’s extraordinary possibilities for painting’s disorganized or fluctuating surface to interact with physical space and light, often giving way to dramatic resonance despite the highly intimate scale of the work. The amorphous forms that constitute “Grimex” (2019) bring to mind “Action Painting”, the term coined by Harold Rosenberg in 1952, except now Shuldiner has taken it to the level of “Action Relief”.[2] Though the armature of this three-dimensional “Action Sculpture” is a wooden frame, the medium of painting here incorporates masses of protrusive concrete and a surfeit of other materials that culminate in cavernous spaces. Here the exceedingly lustrous surfaces reflect light, though the infinitesimal shades and shadows virtually dissolve with the inherent blackness of the surface. Gestural applications of pale blue and silver within the open cavern heighten the baroque, sparkling tenebrosity, while “Grimex” inventively expands the definitions of “bravura” and “impasto” through the physical reality of protruding and receding concretions that are as painterly as they are sculptural. 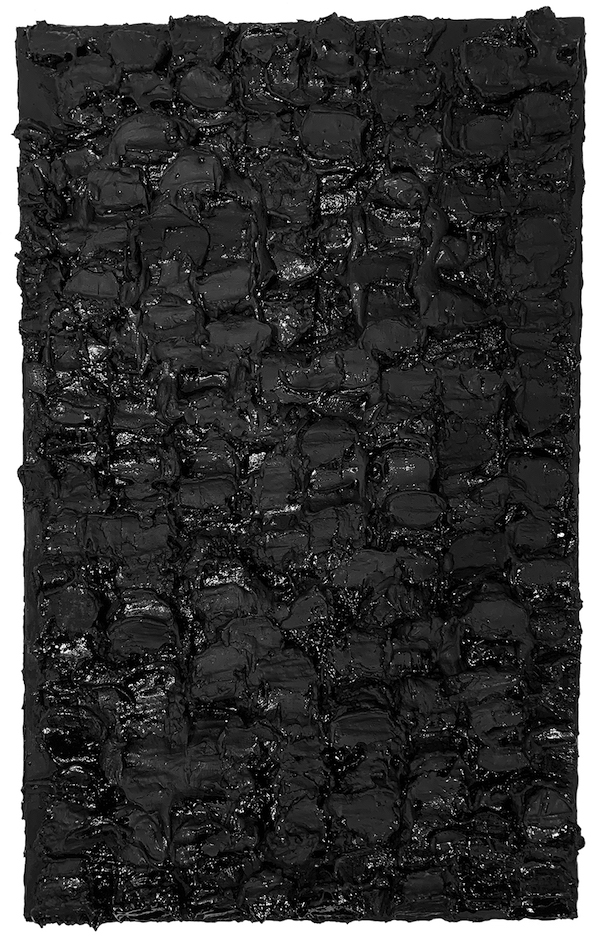 The shimmer upon Shuldiner’s paintings is reminiscent of the purely black, scintillating surfaces of Pierre Soulages. Bewilderingly titled “bUsr3cUcrV..3n_butterfly” (2020), this rectangular, vertical painting encapsulates the nebulous motifs that recur within the majority of the works on view, although here indefinite geometric forms have been somewhat systematically tabulated, rhythmically amplifying the play of light and shadow we find upon the surface of “Peinture 202 x 453 cm, 29 juin 1979” of Soulages, a lustrous black painting housed at Centre Pompidou in Paris. “Black: as an undefined signifier, multi-coded metaphor and paradoxical koan of [absolute] nothingness…” has stated Shuldiner, resonating with one of the statements of Soulage, “Black has a hidden potential which I, aware of what I do not know, am eager to discover”. While the term “outrenoir”, originated by Soulage to convey the approximate meaning of “beyond black”, finds some of its most relevant instances throughout the surfaces of the works on view in this exhibition, the pioneering practice of Shuldiner has momentously expanded and redefined the term’s connotations by means of luminous surfaces upon substantially projected and recessive forms.

Though paying homage to the legacy of Soulage, the innovative output of Shuldiner has expansively transformed the definition of abstract painting into relief sculpture, bringing to mind not only nonrepresentational, modernist precursors but also figurative ones of antiquity. If Lee Bontecou’s optically unfathomable relief painting “Untitled” (1961) of the Museum of Modern Art in New York evokes the Late Roman relief through the projection of rotund motifs from its vertical ground, Ellsworth Kelly’s “Blue on Blue” (1963) of the Los Angeles County Museum of Art acts as a modernist counterpart of the flat, tactile and impermeable Egyptian relief through its shallow elevation.

In his pivotal book Historical Grammar of the Visual Arts, Aloïs Riegl incisively captures the tactile and objective properties of ancient Egyptian reliefs, contrasting them with the optical and subjective characteristics of Late Roman reliefs: “Relief originated as a barely discernible projection from the ground, meant to suggest the objective surface of an object oriented toward the viewer. The zenith of the medium’s development was reached in Rome during the final phases of the pagan Imperial age, with the highest possible projection of the motif from the ground, on the one hand, and the full denial of ground, on the other hand. In such works, the eye no longer apprehends objective surfaces separately from the overall impression of form.”[3] The highly abstract visual language of Shuldiner not only remains in intricately nuanced discourse with the Egyptian, Greek and Late Roman reliefs, but it compellingly embodies the visual characteristics and formal elements of iconic modernist works, circumventing the divisions of painting and sculpture, while inscribing a poetry of colour through the elusiveness of the visual phenomenon designated as black.

1. On light and colour, particularly Eugène Delacroix’s stance on black as quoted by George Sand, see Jacqueline Lichtenstein, “Modern Color: A New Paradigm”, in Painting beyond Itself: The Medium in the Post-medium Condition, eds. Isabelle Graw and Ewa Lajer-Burcharth (Berlin: Sternberg Press, 2016),  pp. 63-76.