To mark the 25th anniversary of the Estorick Collection, the gallery is presenting a major exhibition of works by Giorgio Morandi, considered by many to be an “artist’s artist,” whose quiet canvases have developed a cult following. The art historian, Roberto Longhi, described him as ‘arguably the greatest Italian painter of the 20th century’.

For the first time, the entire collection of 50 paintings and works on paper by the artist belonging to Italy’s Magnani-Rocca Foundation will be on show in the UK. Luigi Magnani was one of Morandi’s most prominent patrons and a close personal friend.

Most of the images are of domestic objects he arranged and re-arranged in his bedroom/studio at his family apartment he shared with his three sisters in Bologna. From which he rarely strayed, apart from when he taught drawing at Bologna’s Academy of Fine Arts, an institution at which he himself studied. 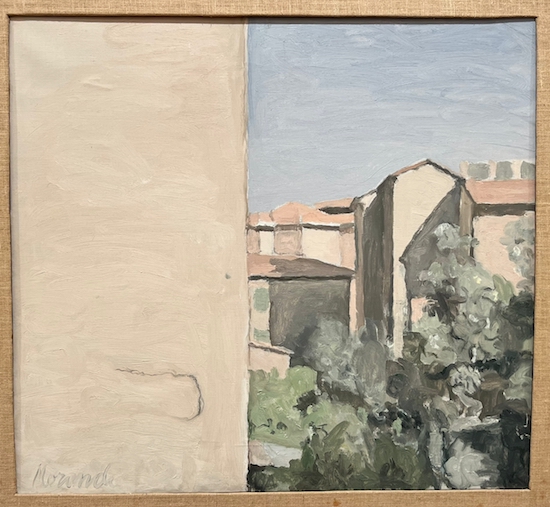 Giorgio Morandi, The Courtyard on via Fondazza 1954

The view from his studio/bedroom is one of the many rarely seen paintings on show here. It’s called “The Courtyard on Via Fondazza” from 1954 and is the view he looked at for most of his adult life. The painting is strange as it is dominated by a large expanse of blank wall, which emphasises the courtyard. Morandi considered landscapes and still-lifes to be interchangeable and approached the trees and buildings in the courtyard the same way he approached vases, pitchers, and bottles – as objects, which can also be appreciated as abstractions.

A lifelong bachelor, he was often considered to have been something of a recluse, but he was also at the centre of contemporary artistic debate and actively engaged with many of the most important national trends and movements of his day, from Futurism to Metaphysical Art, although he refused to ally himself with any artistic group.

One of his metaphysical works, ‘Metaphysical Still Life’ from 1918, is on display, but the bulk of the works on show are his still-lifes, which are incredibly consistent in form, colour and light. He produced these trademark paintings from the 1920s to the 1960s: still-life arrangements of household objects painted in muted colours: vases, bottles, and pitchers on flat surfaces – meticulously precise and ordered. Morandi, who at his peak was producing one still-life painting a week, once said: “It takes me weeks to make up my mind which group of bottles go well with a particular tablecloth. And yet still, I often go wrong with the spaces. Perhaps I work too fast.”

The still-lifes hint at a sort of frugality in keeping with the idea of him as a simple reclusive figure (who went by the nickname of Il Monaco – ‘The Monk’). As he himself put it, “I’m a painter of the kind of… composition that communicates a sense of tranquillity and privacy, moods which I have always valued above all”.

But he also made a small number of portraits, flower studies and landscapes (often, as noted, resembling his still-lives), some of which are here, including a lovely self-portrait (1925), of the artist aged 35, which Magnani bought from another collector and considered it to be the best of the few self-portraits he produced (and the only trace of an animate object in the show). 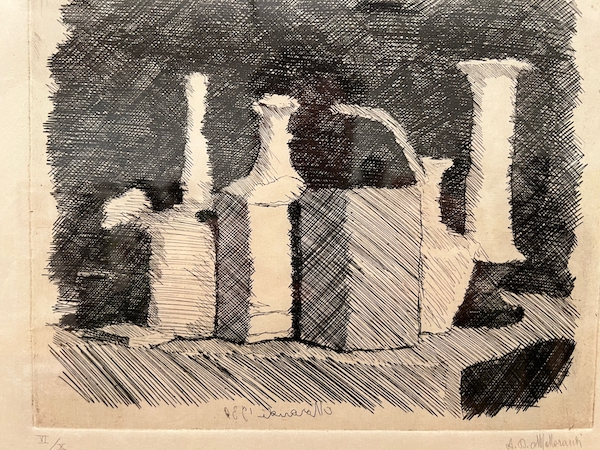 Morandi was self-taught as a printmaker, and the numerous etchings on display here were a revelation to me. They are the same subject matter as his canvases and other works on paper, but the sharp etching needle on a plate produces a very different form of mark-making than brush and canvas. They do, however, retain the same hazy dream-like quality as his paintings, thanks to dense cross-hatching, which gives it a gauze-like effect whilst adding another layer of abstraction. His mastery of subtle lighting with hatching creates an atmosphere of restrained emotion and an almost eerie stillness we know from his paintings.

It is the quiet moments that are often the most profound in art, and I found his devotion (if not obsession) to the simplest of still-lifes very moving. With artists like Cezanne (another artist who re-invigorated the still-life), we can sometimes read moods in the shifts in light and tone, but with Morandi, his works show no obvious sign of place or time or even symbolism. His work is so understated (and possibly repressed) that I came away feeling that I didn’t know Morandi at all. Having said that, the work itself stayed with me long after.

Estorick’s own collection of works by Morandi is also on display at the museum.

Giorgio Morandi: Masterpieces from the Magnani-Rocca Foundation is at the Estorick Collection, Canonbury Square, N1 2AN, until 30 April 2023 .