The Grayson Perry show that just opened at the Serpentine Gallery offers both a very new version of now-obligatory populism in the promotion of contemporary visual art and at the same time, a sly critique of it.

“Here’s art that makes a whole series of relevant points, without at any time losing its sense of humour” – ELS

Perry offers, to put things politely, a new take on the idea of an up-to-the-minute culture hero, and in doing so, kicks over any number of lumbering apple carts. A transvestite potter, in full drag, offering his personal take on the way things are now – what art does or can do if it tries, busy doing so within a very official framework. Make no mistake of the fact, the Serpentine, cosily situated in one of London’s grandest public locations, is, in fact, an official gallery, an established venue for events the cultural Establishment approves of and supports. Those concerned with the enterprise, a collective manifestation of the immortal Miss Piggy, may, as she does, gaze at their inturned tootsies, blush, and murmur ‘What, moi?’ but modesty of this kind deceives nobody. 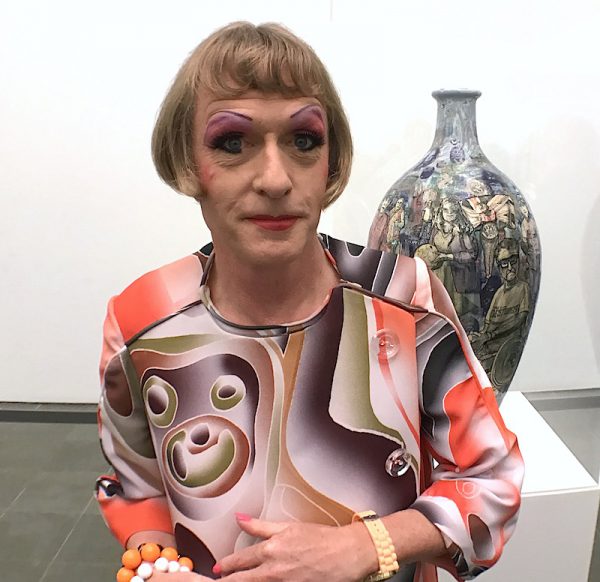 Grayson Perry The Most Popular Art Exhibition Ever!

All of this may sound as if I think the Perry manifestation is a bust. In fact, the contrary is the case. The event is quite likely to live up to its hubristic title The Most Popular Art Exhibition Ever! and it will be a very good thing if it does. If the crowds roll up, I’ll be there on the fringes, selling the kiddies choc ices and cheering. Here’s art that makes a whole series of relevant points, without at any time losing its sense of humour. About how many recent manifestations of the art of today can you actually say that?
Perry, disguised in the silks and slap of his alter-ego Claire, is basically both a sharp-edged cultural commentator and an old-fashioned moralist. Art, in general, has recently returned to politics in a big way, but generally, mislays its sense of humour as it does so. Perry keeps his intact.
He has already made a reputation – for example, in his series of Reith lectures (a British Establishment rite) – as an astute and lucid cultural commentator. In that role, this reincarnation of pantomime’s Widow Twanky has become the legitimate successor of the late Lord Clark of Civilisation, a true-born ‘village explainer’, but one to whom one would never attach Gertrude Stein’s dismissive qualification: ‘All right if you’re a village – if not, not.’ 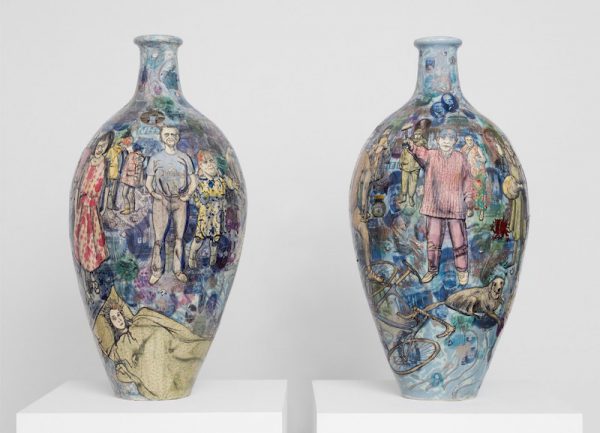 The Serpentine exhibition demonstrates how adroitly he can do this explaining in images, as well as in words. A good example is the pair of big jars that form a centrepiece for the Serpentine’s North Gallery. Entitled simply Matching Pair, they don’t in fact quite match. One is just a teeny bit bigger than the other. Which is exactly to the point, since one is dedicated to the supporters of Brexit, and the other to the Remainers. The imagery is crowd-sourced – Perry used the web to ask the public what they thought. The backgrounds to the intricate imagery are, however, uniformly blue, because members of both factions said that blue was their favourite colour. These jars are as complex in their allegories as some of those on the wares that the Jingdezhen porcelain kilns made for the Chinese imperial court, but intelligible to all in their current context. 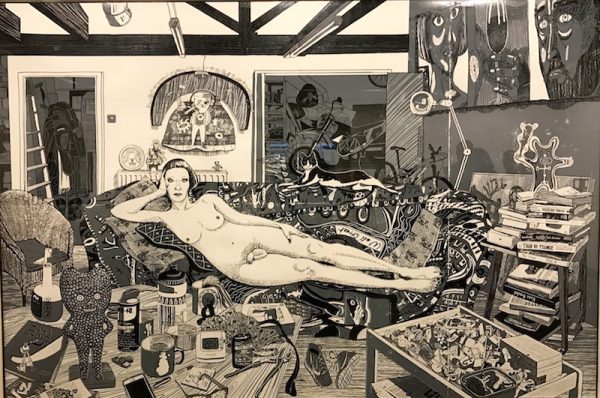 Reclining Artist, nude, possessed of both a penis and a neat pair of breasts

Perry’s work, in fact, has deep roots in the history of European art, which is often didactic and populist, but somehow survives the circumstances which prompted it, to achieve something universal. I suppose my favourites here were not the pots, nor the Africanising sculptures, nor the fancy custom-built motorcycle with a little shrine on the back. These all appealed to me, not least for the way the demonstrate Perry’s gift for being both serious and not-serious simultaneously. What I liked best, however, were two gigantic black and white woodcut prints – a Reclining Artist, nude, possessed of both a penis and a neat pair of breasts; and an allegorical Animal Spirit, a charging bull with exposed entrails. These successfully sustain a weighty comparison with Renaissance printmaking allegorists such as Durer. And his prints were populist too. Durer’s mother sat in the market place at Nuremberg in order to sell them on behalf of her son.