Artangel has created what is likely to be the most thought-provoking exhibition of 2016. Known mostly for their solo projects, this is a rare group show and not only includes well-known visual artists but also a number of writers and poets. The concept centres around the notion of separation and what better a place for this, than in a prison. 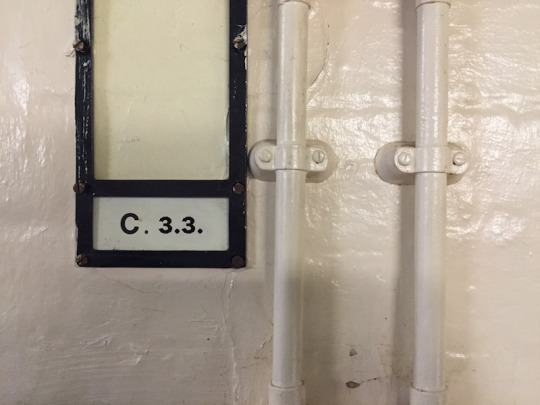 Reading Gaol has been immortalised by its most famous prisoner, Oscar Wilde who was imprisoned for “gross indecency” at the end of the 19th century. His letter written to his lover Lord Alfred “Bosie” Douglas titled, De Profundis is where this exhibition takes its starting place. Artangel has taken the grim interior of the George Gilbert Scott Grade II-listed building and transformed it into a series of exhibition spaces. Much of the graffitied walls and doors remain including an emergency button in one cell labelled ‘Room Service’. Space and setting is a powerful backdrop which sometimes competes with the artists’ works. It’s a grim reminder that this was a real prison only decommissioned three years ago. Artists include some big names like Ai Weiwei who spent over 18 months incarcerated in China for his own political beliefs and here acts as writer pouring out his feelings about his imprisonment to his infant son. Marlene Dumas has created a series of soft-focus portraits which spread into a number of adjoining cells, notably portraits of Oscar Wilde and Bosie. Nan Goldin has put together a site specific installation using several images of the German actor Clemens Schick, someone aware of his allure to the same and opposite sex as was Bosie. Steve McQueen has displayed a sculptural installation of a bed shrouded in gold plated mosquito netting which depicts claustrophobia. Wolfgang Tillmans has made a video which depicts the physical and mental effects of confinement. He has also created a series of self-portraits mounted on mirror which reflects the cell, in the third portrait he is not present.